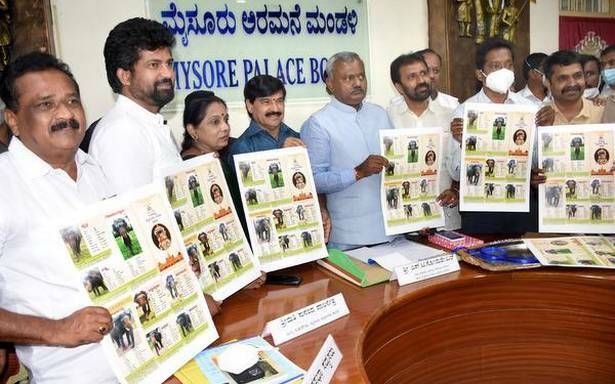 The Dasara Executive Committee, which met here on Wednesday, announced that the festival will be inaugurated atop the Chamundi Hills on October 7 between 8.15 a.m. and 8.45 a.m.

However, Chief Minister Basavara Bommai will consult representatives and announce later as to who will inaugurate the festivities.

Jamboo Savari will be held on October 15 from 5 p.m. to 5.30 p.m. on the Mysuru palace premises and will entail only three tableaux as the events have been curtailed for the second consecutive year due to the pandemic.

District in charge Minister S.T. Somashekar told media persons that Gajapayana, the march of elephants from jungle camps to the palace to participate in Dasara, will be held at Veeranahosahalli on the outskirts of Nagarahole on Monday.

The eight elephants led by Abhimanyu will be received with traditional honours at the Jayamarthanda Gate of the palace on September 16 marking the countdown to the commencement of the Nada Habba.

In a first, the idol of Goddess Chamundeshwari, placed on the golden howdah and carried by the elephant during the Jamboo Savari, will be brought from Chamundi Hills to the palace in a procession. The procession route will be embellished and the idol decorated. This is to enable the public to get a darshan of the deity, said Mr. Somashekar. All these years, the idol used during inauguration would be brought to the palace ahead of the Jamboo Savari without fanfare.

The cultural programmes will be restricted to the palace premises.

The artistes for the cultural programmes will be finalised later and only those from Karnataka will be allowed to perform. However, the duration of the programmes will be short and the number of people who can witness it will be limited. But in case active cases continue to decline, a decision will be taken after September 25 on whether to open up the events to more people.

The committee also decided to illuminate the city and nearly 150 roads spanning nearly 100 km and 77 circles from October 6 to 15.

The Minister said the Dasara high-powered committee meeting had announced ₹8 crore for this year’s festival. The authorities have sought ₹50 lakh for the maintenance of the elephants that will take part in Dasara and even this will be sanctioned, the Minister added.