Arsenal continued their winning start to the new season with a 4-2 victory over Leicester City on Saturday.

The Gunners began the brighter of the two sides and eventually broke the deadlock midway through the first-half as Gabriel Jesus scored his first goal for the club. The Brazilian netted another moments later as Arsenal went into the half-time break two-nil up, although Leicester did have a penalty overturned by VAR in the 45th minute.

An own goal from William Saliba gave the Foxes some hope just after the interval as he headed the ball into his own net. But the Gunners restored their two-goal advantage through Granit Xhaka, who tapped home after a horrendous error from Danny Ward.

James Maddison reduced the arrears once again with a tidy finish, as he fired the ball past Aaron Ramsdale. The Foxes could not make the most of that goal, however, as Arsenal scored their fourth two minutes later. Gabriel Martinelli lashed the ball into the corner for his second goal of the campaign.

Here are five talking points from the Emirates Stadium.

Arteta named an unchanged XI after their win over Palace, meaning Kieran Tierney was named on the bench for the second successive game, and it is easy to see why. The Gunners boss wants his full-backs to come inside and operate as midfielders when in possession, like Manchester City.

This suits Oleksandr Zinchenko to a tee, with the Ukranian used to playing as a No.8, having played in a similar system under Pep Guardiola last season. After an impressive debut, Zinchenko followed that up with another excellent performance against Leicester and already looks like a bargain at £32m. On the other side, Ben White also dropped into midfield and picked up similar positions to Joao Cancelo and Kyle Walker at City.

Although he did not score at Palace on the opening day, Jesus showed plenty of positive signs and has turned them into goals, after he struck a brace against Leicester. His first was a moment of brilliance, with Arsenal working the ball well down the left side, and it fell to Jesus on the edge of the box. The Brazilian, surrounded by four Foxes defenders, expertly clipped the ball around those bodies and into the top corner.

Jesus then grabbed his second in the 35th minute, heading home from close range after Gabriel Martinelli's corner was flicked on by Jamie Vardy, with Jesus picking up the pieces at the back post. It was a finish of a natural goalscorer - something Arsenal lacked last season following Pierre Emerick-Aubameyang's departure.

How many goals will Gabriel Jesus score this season? Let us know in the comments below!

In actual fact, Jesus has already scored as many goals from open play as Alexandre Lacazette did in 21/22. He also managed to grab two assists in the second-half, squaring the ball across to Xhaka for the Gunners' third, before teeing up Martinelli, who fired past Ward.

There has been plenty of rumours circulating about Wesley Fofana's future, with the defender linked with a record-breaking move to Chelsea in the transfer window. Although Thomas Tuchel's side have already made two bids and Fofana reportedly wants to leave the Foxes, he was still named in the Leicester side to take on Arsenal.

But the £90million-rated man struggled defensively against the dynamic Martinelli, who caused Fofana havoc on the Gunners' left-hand side. The Frenchman lined up on the right side of a back-three and Martinelli managed to beat his man on a number of occasions, especially during the first-half. Fofana did, however, almost score after weaving through the Arsenal defence but could not beat Aaron Ramsdale.

Although Arsenal did come out on top, Saliba may want to forget about his own-goal sooner rather than later, after he headed the ball beyond a hapless Ramsdale. A long ball was helped on by Justin towards Vardy, but Saliba decided to head it back, rather than allow Ramsdale to come and collect it.

The Arsenal goalkeeper could only watch the ball dribble into the back of the net - a frustrating moment for the Gunners, who kept a clean sheet on the opening day at Palace. However, Saliba was instantly applauded and supported by the home supporters - a sign that the mentality around the club is slowly changing.

At times last term, Arsenal created so many opportunities but were unable to put the ball into the back of the net. Fast forward to the start of this season and the Gunners have scored six goals in two matches.

They are slowly beginning to look the finished article at the front end of the pitch, with Bukayo Saka, Martinelli, Martin Odegaard and Jesus combining well throughout. The Gunners only had six shots on target against Leicester, and scored four of them. Arteta's side looked like scoring at every opportunity and were very direct in possession, rather than keeping the ball for the sake of it. 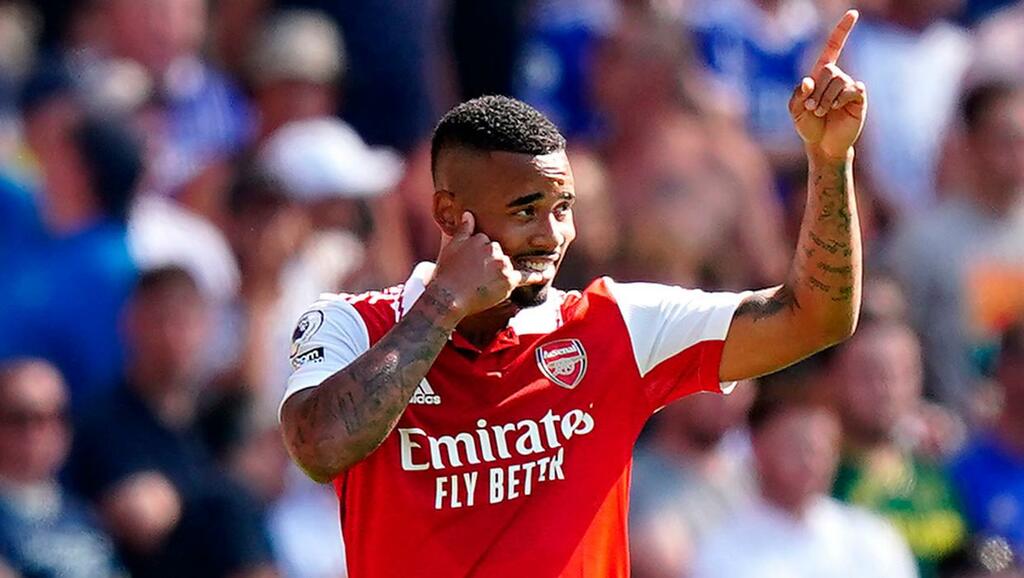 Gabriel Jesus marks home debut with double as Arsenal see off Leicester
Gabriel Jesus emphatically announced his arrival at the Emirates Stadium with a brace in Arsenal’s 4-2 victory over Leicester.

Irish Independent
From analysis to the latest developments in health, read the most diverse news in one place.
Arsenal player ratings vs Leicester as Gabriel Jesus, Granit Xhaka and Gabriel Martinelli shine

Gabriel Jesus had a hand in all four Arsenal goals as Leicester were beaten at the Emirates Stadium on Saturday.

The Guardian - UK
One place to find news on any topic, from hundreds of sites.
Arsenal line-ups vs Leicester as Tierney starts, Fabio Vieira on the bench, Smith Rowe decision

football.london's Arsenal writers pick the line-up Mikel Arteta should name for the Premier League clash against Leicester City at the…