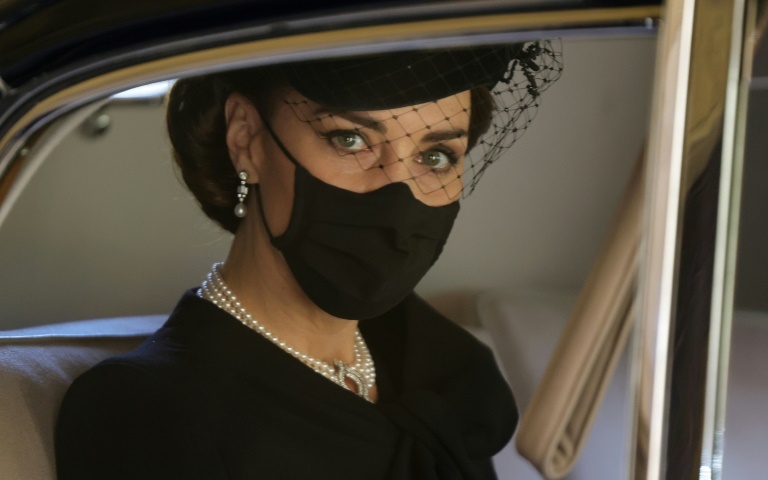 London (AFP) - Catherine, Duchess of Cambridge, turned 40 on Sunday, hitting the milestone as her profile soars alongside her husband, Prince William, the future king.

Since marrying into Britain's most famous family in 2011, the former Kate Middleton has emerged to become one of the most popular royals -- and a figure central to its future.

Her image as a safe pair of hands, at a tricky time for the monarchy, was boosted at a televised Christmas carol concert in December.

She delighted fans with her musical prowess by accompanying the British singer-songwriter Tom Walker on piano for his poignant song "For Those Who Can't Be Here".

Kate rehearsed in secret for the surprise performance at Westminster Abbey, which was dedicated to everyone who served their communities during the coronavirus pandemic.

"She was absolutely fabulous -- she smashed it.What a talented, kind, warm-hearted, lovely person," Walker said, describing her as "very chilled, very nice" to everyone.

Both Kate and William, who turns 40 in June, have been much more visible public figures since the start of the global health crisis.

The couple have held video meetings with frontline healthcare workers battling the outbreak, which has claimed some 150,000 lives in Britain since early 2020.

They have also given insights into life with their three children in lockdown -- albeit in a sprawling country pile on a royal estate.

As restrictions lifted, they have been seen at official engagements, from the glitzy world premiere of the new James Bond film to meeting world leaders at the G7 and UN climate change conferences.

Kate has also pushed her own initiatives such as championing early years education and, with William, promoting mental health and protecting the environment.

The couple's former private secretary Jamie Lowther-Pinkerton told The Times newspaper that part of Kate's appeal was her polite, down-to-earth and unflustered nature.

"She takes time to talk to people," he said, likening her to Queen Elizabeth II's own mother, who was a symbol of British resilience during World War II.

"She is tough.She has got that Queen Mother feel in her, so that when things need doing, she is there to do them."

A lot of the focus on Kate since she and William started dating as students in Scotland was on her middle-class background.

Despite attending one of Britain's top private schools, much was made of how she would fit in to the arcane world of royalty with its traditions and conventions.

Early comparisons were inevitably drawn with William's own mother, Princess Diana, who struggled with the forensic media scrutiny after marrying Prince Charles in 1981.

But Kate has in public at least given the impression of being eager to embrace royal duties, and unlike her sister-in-law, Meghan, given little away.

In the British media, she has enjoyed favourable coverage, particularly since Meghan and her husband Prince Harry quit royal life and moved to the United States last year.

Up to the task?

Some attribute the difference in public attitudes towards Kate and Meghan to a very British reaction to emotional candour in a country known for stiff upper lip reserve.

Certainly, Meghan's criticism of a cherished British institution, including accusing it of racism, did not help.

Nonetheless, Kate -- known for carefully curated social media posts of family life -- has encountered some brickbats, not least for her immaculate appearance.

The novelist Hilary Mantel even accused her of resembling a "shop-window mannequin with no personality of her own".

But she is clearly seen as a dependable figure in royal circles at a crucial time.

The royal family has also been rocked by a US civil claim for sexual assault against the Queen's second son, Prince Andrew, and his links to the convicted sex offenders Jeffrey Epstein and Ghislaine Maxwell.

Harry is also poised to publish his memoirs this year amid fears of fresh revelations.

With the Queen now 95 and stepping back from public duties on health grounds, William's father Charles and his second wife, Camilla, have become more prominent.

But with Charles now 73, his reign, when it starts, is already being seen as a transition to William and Kate's more up-to-date, empathetic, Instagrammable version of a venerable institution.

Royal author Phil Dampier said with Harry in self-exile, Andrew in the shadows, and other senior royals ageing, "the whole future rests with William and Kate".

"Fortunately they look up to the task and I'm sure her best is yet to come," he told the Daily Mail.