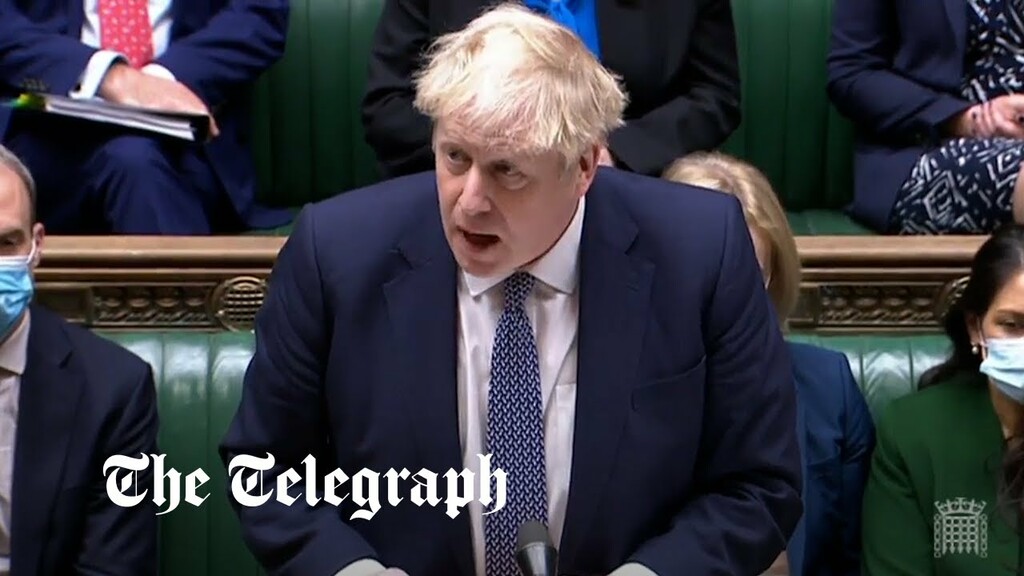 Senior Tories on Wednesday demanded Boris Johnson’s resignation over his attendance at a Downing Street garden party at the height of the first lockdown in May 2020.

Will Wragg, the vice-chairman of the 1922 committee, was joined by Douglas Ross, the Scottish Tory leader, and Sir Roger Gale, a veteran backbencher, in urging the Prime Minister to quit.

They became the first Conservative MPs to publicly call for Mr Johnson’s departure, with Sir Roger saying he believed the Prime Minister was “politically a dead man walking”.

Mr Johnson apologised for attending the event and acknowledged the public’s “rage” but insisted he thought it could technically have been within the rules.

He told MPs he went to the gathering for around 25 minutes to “thank groups of staff” and “believed implicitly that this was a work event”, adding: “With hindsight, I should have sent everyone back inside ... I regret very much that we did not do things differently that evening.”

The explanation generated a muted response from Tory MPs, with one saying later: “I watched my own benches. No one was happy.”

Senior Conservatives privately tore into Mr Johnson’s remarks. One former Cabinet minister told The Telegraph: “I’m
sorry, but it is not a proper apology.

The MP predicted that Tory anger would “just drag on”, adding: “A year of agony is a high possibility.”

After Prime Minister’s Questions, Mr Johnson lingered in Parliament and attempted to rally morale among his MPs. One Conservative said he appeared to be targeting members of the 2019 Conservative intake.

But as the day wore on, demands for his resignation emerged from Tory MPs for the first time in his administration.

Sir Roger, the North Thanet MP, declared him “politically a dead man walking” who had “misled the House” with previous claims that no parties had taken place and no Covid rules had been broken. He told the BBC that Tory MPs had been left in “an impossible situation”.

Later, he said: “We’ve reached the end of the road. Enough is enough, a red line has been crossed. The information given at the Despatch Box was clearly not correct.”

Mr Wragg said Mr Johnson’s position was “untenable”, adding: “I don’t think it should be left to the findings of a civil servant to determine the future of the Prime Minister and indeed who governs this country.”

Asked whether Mr Johnson should resign, he said: “I think that would be preferable, because it’s difficult enough for colleagues… they’re frankly worn out defending what is invariably indefensible.” He urged the Prime Minister to “do the right thing” and quit.

Mr Ross also described Mr Johnson’s position as untenable, a position shared by 23 of the 31 Tory MSPs, saying: “I said yesterday that if the Prime Minister attended this gathering, event, in Downing Street on May 20, 2020, he could not continue as Prime Minister. So, regretfully, I have to say his position is no longer tenable.”

He confirmed he had submitted a letter of no confidence in Mr Johnson, while an unnamed member of the 2019 intake indicated to The Daily Mirror that they had also sent a letter. Tory MPs speculated that the number of letters may have reached between 20 and 30.

But Cabinet ministers defended the Prime Minister, both on the airwaves and in private Tory WhatsApp groups.

Priti Patel, the Home Secretary, praised his “heartfelt apologies” and told colleagues in a group chat: “Now is the time to put our shoulders to the wheel and back Boris to deliver on the people’s priorities.”

Jacob Rees-Mogg, the Leader of the Commons, told Times Radio that those calling for Mr Johnson’s departure were “people who are always unhappy… who have never really supported” him.

Rishi Sunak, the Chancellor, waited eight hours before commenting, tweeting: “The PM was right to apologise and I support his request for patience while Sue Gray carries out her enquiry.”

I’ve been on a visit all day today continuing work on our #PlanForJobs as well as meeting MPs to discuss the energy situation.

The PM was right to apologise and I support his request for patience while Sue Gray carries out her enquiry.

Mr Sunak was not present in the Commons as he made a visit to Devon to promote his “Plan for Jobs” policy. Sources close to the Chancellor insisted the visit had been planned 10 days ago.

Michael Gove, the Communities Secretary, who addressed the weekly meeting of the 1922 committee on Wednesday, told reporters that “given everything, it was right for the Prime Minister to apologise” and confirmed he believed that Mr Johnson had done enough.

But a number of backbenchers expressed dismay, with one MP telling The Telegraph that a significant number of local party members had quit in recent weeks. Another said: “A colleague in the ‘Red Wall’ has had 800 emails about this –which is bigger than their majority.”

Tory MP Julian Sturdy said: “It is already clear that the Prime Minister’s assertion that this was a work-related event will not wash with the British public, who at the relevant time were making significant sacrifices.” He vowed to hold Mr Johnson to account.

Stephen Hammond, another Conservative MP, also cast doubt on Mr Johnson’s explanation and said: “It clearly was not a work event, and that is the problem. I think it’s pretty surprising the PM wasn’t briefed to that effect.”

Privately, another Conservative commented: “The problem with a s---show is someone else has to clean it up”, while a member of the 2019 intake warned: “We are not happy. Our best asset has now become our biggest liability. We know this is not the end of it. There is more to come.”

One MP said that while Mr Johnson had “not changed any minds”, there had been “no killer blow today”, adding: “He’s taken on a lot of water and is listing, but not quite sunk yet.”

Sir Christopher Chope, the MP for Christchurch, told Sky News he felt the Prime Minister had made “the most abject and fulsome apology”, while another Tory MP said: “He’s done the right thing. He was bang to rights and the evidence was against him. He had to apologise. It’s not the end of it, but politics is about much more than what happened in May 2020.”

Mark Harper, a former chief whip, said he wanted to wait for the conclusion of Sue Gray’s inquiry, adding: “When we know all the facts, it will be up to every Conservative MP to consider what action needs to be taken to ensure our country has the leadership it deserves.”