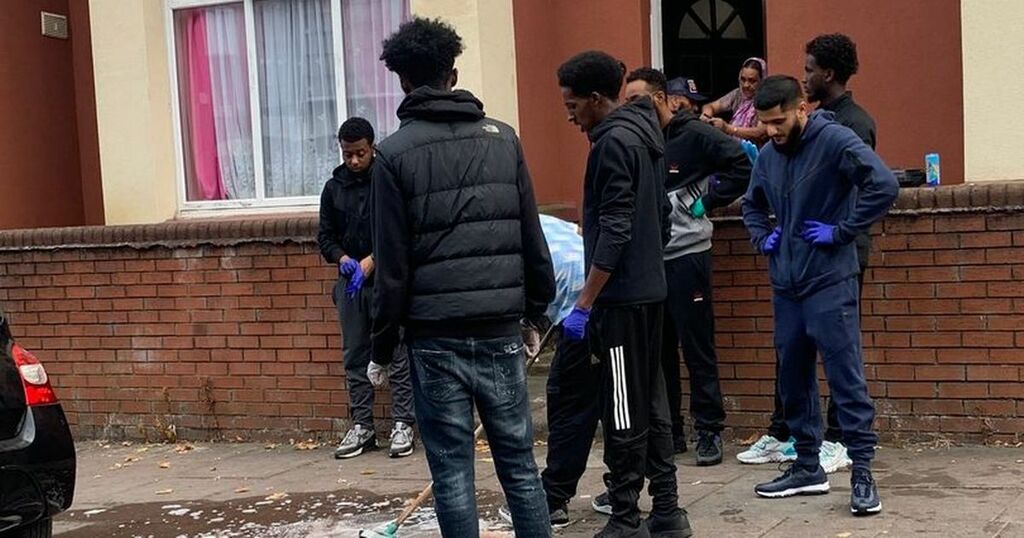 Family members, neighbours and friends of a dead man were left to scrub bloodstained streets on the night of September 9 following a fatal stabbing.

A murder probe was launched after an 18-year-old, who had been discovered with critical stab wounds, died in the early hours of September 9.

Leicestershire Police had cordoned off a large area of the Melbourne Street, Leicester, neighbourhood for most of the day which was later removed with the exception of a strip of police tape, reports Leicestershire Live.

Members of the community had arranged a vigil in the area at approximately 5pm and were permitted, by officers at the scene, to enter the crime area.

However on arrival, family members and other locals saw that the street was still in the same bloodstained state. Residents had no other option but to clean it themselves - which the force has now issued an apology for.

Shareefa Energy, a youth worker from Highfields, attended the vigil with a friend.

Seeing people become "angry and upset" about the scene, she said she approached an officer about it being cleaned.

While waiting, a local resident offered to cover the floor with lengths of fabric, before neighbours pulled together using jet washers, hose pipes, buckets of water and brushes to scrub away the stains.

"His own brothers and friends were cleaning up his blood - they're already in shock.

"I thought to myself - 'where is the trauma support for these boys?'", Shareefa stated.

He said he spoke to an officer at the time about the street being cleaned "but by then the damage had been done".

"The community did it themselves and dealt with it amazingly - it was brilliant the way they handled it."

The councillor added: "I asked for as a minimum on behalf of the community and the family for a public apology and a more personal one for those personally affected which the police are doing."

An enquiry into the circumstances around the issue will also be taking place.

In Loughborough, on the same day - following the death of a man in relation to a separate incident - images captured showed bloodstained areas being thoroughly cleaned.

The Leicestershire force have been contacted for a response, asking about the normal protocol for cleaning scenes of incidents.

An apology shared on social media this morning, attributed to Assistant Chief Constable, Julia Debenham said: "I want to apologise unreservedly to the family and friends of this young man, along with other members of the community involved in cleaning up blood from the road and pavement last night.

"This must have been extremely distressing.

"It is totally unacceptable that this mistake happened and I have asked for an urgent enquiry into the circumstances.

"The investigation into this terrible crime and bringing the offenders to justice is our top priority."

Police have launched a murder investigation into the death, and enquiries remain ongoing.

"We understand there were a number of people in the area around the time of the incident and are appealing to anyone who was in the area and who has any information to make contact.

“Please think back - were you in the area of Melbourne Street, Maidstone Road, Garendon Street, Maynard Road or Kent Street?

"Did you see or hear anything which caused you concern? Do you have any CCTV or dashcam footage from the area which could assist our investigation? If you do, please get in touch with us."

Anyone with any information should call the 101 police number, or get in touch with detectives using the force website.