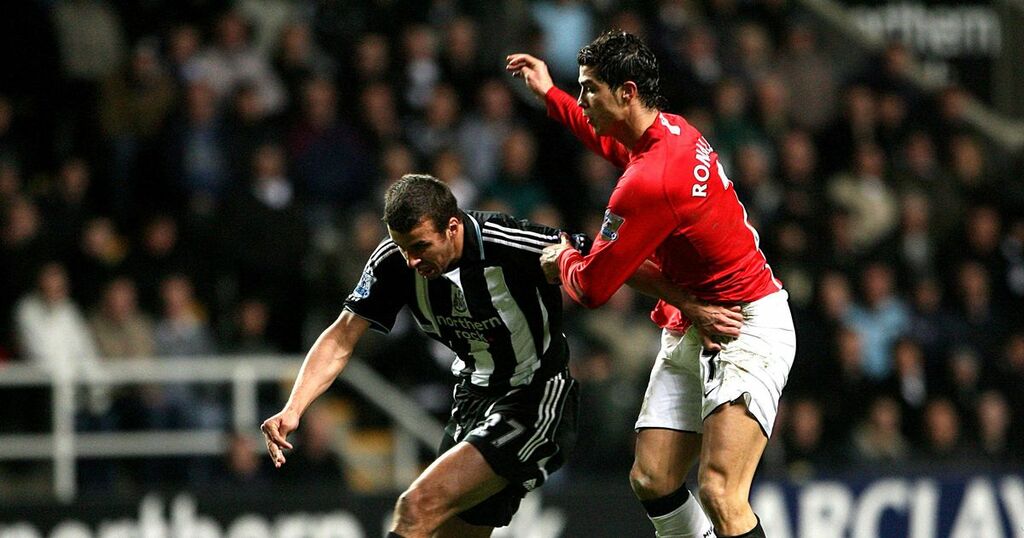 Cristiano Ronaldo was involved in a tunnel bust-up as tempers flared the last time he played Newcastle.

The Manchester United new boy has returned to the Premier League following 12 years away in Spain and Italy.

He is poised to make his homecoming at Old Trafford against the Magpies - but will hope tensions don't boil over once again.

Just before the interval the Portuguese star was fouled by Steven Taylor, which saw the Toon star pick up a caution.

The United man was angered by the challenge however and things got heated as they made their way to the dressing rooms.

According to the Guardian Ronaldo told Taylor he was "a rubbish footballer".

The Newcastle defender responded and reportedly told his opponent: "I know, but you are still ugly."

Rio Ferdinand is said to have had to separate the pair along with referee Steve Bennett.

Chris Hughton, at that point Newcastle's boss, defended his player, saying: "I've had the opportunity to see it again and Steven was a bit headstrong in his endeavour to pull Ronaldo back.

"But he caught him on the shoulder and neck, that's all it was."

Taylor himself poured water on the incident, adding: "There was no bust-up with Ronaldo. I shook hands with him at the end of the game."

Newcastle had taken the lead in the north east with Peter Lovenkrands putting them ahead within the opening 10 minutes.

Wayne Rooney equalised midway through the first-half before Dimitar Berbatov completed the comeback in the second-half.

It would also prove to be Ronaldo's final season in England before a world record switch to Real Madrid.

The 36-year-old is set to again don the famous red jersey with Ole Gunnar Solskjaer confirming he will feature at the weekend.

He said: "He’s been having a good pre-season with Juventus, he’s played for the national team, he’s had a good week with us here. He’ll definitely be on the pitch at some point, that’s for sure."

Before adding: "Everyone evolves and develops throughout their career. Of course Cristiano is a different player to the one who left but he’s in such good nick still, he’ll be looking at the next few years to play as much as he can, score as much as he can.

"He’s a threat from direct set plays himself but also to be on the end of crosses. He’s adding something extra that we haven’t got.

"His skillsets in the team, the mix of his skillsets, well, no one has [those] really, because he’s one of the best players that has ever played the game."