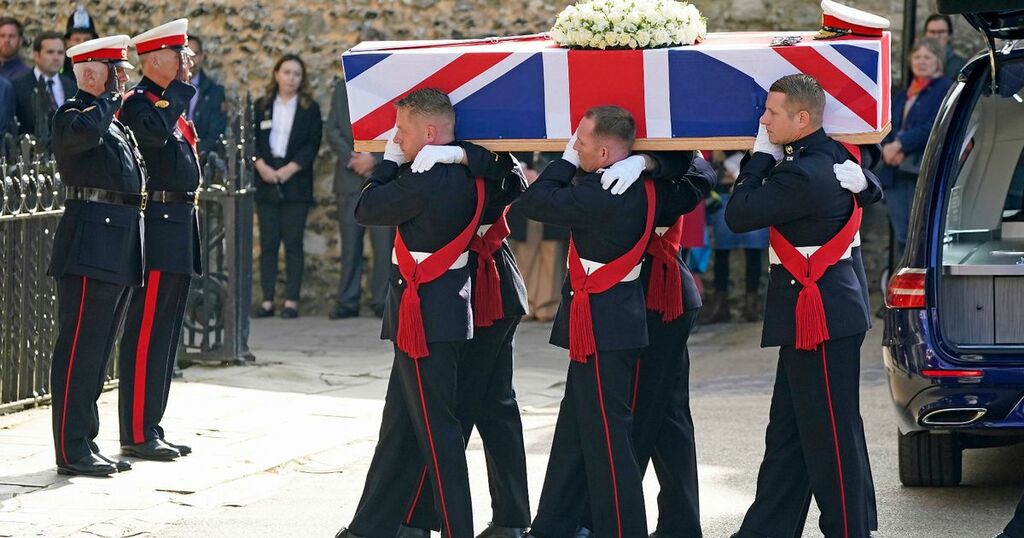 The funeral for the former head of Royal Marines who was found dead in his home has taken place.

Major General Matthew Holmes, 54, was tragically found in his house in Winchester on October 2 after having 'concerns about his marriage and service career', an inquest heard this week.

Major General Holmes, who had served in Northern Ireland, Kosovo, Iraq and Afghanistan, had split from his wife, Lea, and lost his job as Commandant General before his death.

The Vice Chief of Defence Staff Sir Timothy Fraser and representatives from the US Marine Corps was also in attendance.

Major General Holmes' coffin was driven through, followed by his wife and two children William, 11 and Eleanor, 15.

His wife Lea held hands with her children William and Eleanor, and were all wearing black.

Marines from the commando training centre lined the walkway leading up to the Cathedral and his coffin was covered in a union jack.

The funeral was attended by more than 700 people and members of the public gathered outside to pay their respects.

The service was led by the Dean of Winchester, Catherine Ogle.

The coffin was carried by pall bearers who were close to Major General Holmes.

Four of which had accompanies Holmes when he carried the Duke of Edinburgh's coffin at Windsor Castle.

Along with a with a Union Jack, his Royal Marines cap, his military medals and a reef of flowers were draped on his coffin, and a squad of Royal Marines assembled to do a volley of three shots after the service.

The father-of-two was appointed as a Companion of the Distinguished Service Order for his leadership on operations in Afghanistan in 2007.

It has been reported that Maj Gen Holmes had fallen out with the new head of the Armed Forces, Sir Tony, over changes to the Marines, which subsequently led to Major General Holmes leaving his post as Commandant General in April this year.

He was halfway through a three year appointment and had felt Sir Tony, 55, 'undermined' him.

At the inquest opening, it was heard Maj Gen Holmes' wife formally identified his body and police attended another incident at him home on September 22.

After his death, his estranged wife Lea said: "He was courageous and had committed his life to serving in the Royal Marines; he was selfless to such an extent that this was more important than his own career progression.

"He was exceptionally proud to have served as commandant general."

Boris Johnson also paid tribute to Maj Gen Holmes, saying he was "very saddened" to hear of the news.

He added: "My thoughts are with Matt's family and friends at this difficult time, as well as the Royal Marines and Royal Navy, who I know will feel this loss keenly."

Defence Secretary Ben Wallace said: "Across defence, we mourn the tragic loss of one of our own. Major General Matt Holmes embodied the spirit of our armed forces, serving with distinction and rigour for over 30 years.

"I shall always be grateful for Matt's assistance in leading the Marines through the reforms of the Future Commando Force."

First Sea Lord, Admiral Sir Tony Radakin, described him as a 'devoted former Commandant General who had served the nation, the Royal Navy and his beloved Corps with distinction'.

He added: "Matt was also a dear friend to many, and a close friend of mine for over 20 years."

A memorial page has been created in tribute to Maj Gen Holmes with donations in his memory going to The Royal Marines Charity and the RNLI.

An inquest into his death is set to take place on February 10 next year.