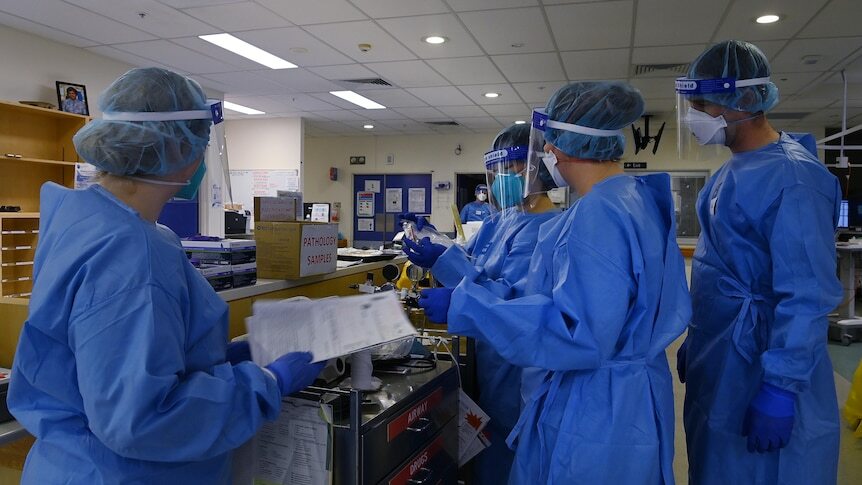 Queensland health workers are calling for more funding to address "dire safety issues" in hospitals as a survey of nurses and midwives reveals 72 per cent worry facilities cannot cope with COVID-19 outbreaks.

It comes after four unions launched a campaign for increased funding and health reform within Queensland Health hospitals, with 58 per cent of respondents fearing hospitals are unsafe for patients and staff.

The Queensland Nurses and Midwives Union (QNMU) questionnaire, also showed 75 per cent of respondents worry their employers would not listen if they identified a solution to improve health services.

The QNMU, Together Union, United Workers Union and Electrical Trades Union are calling for the changes in the Needs Urgent Care campaign to "identify immediate and structural solutions to address issues plaguing the system".

They are also calling for the federal government to introduce a permanent 50-50 Commonwealth and state funding model for public hospitals and changes to funding to support "innovation and integrated care".

"Our governments need to urgently address these issues and listen to our solutions so we can continue to provide the quality care Queenslanders deserve."

Together Union secretary Alex Scott said there were not enough staff to "safely care for Queensland residents" and called on politicians to listen to health staff and work with them on solutions.

"Our emergency departments are overrun, hospitals are running out of beds, and workloads are unsustainable," Mr Scott said.

Recently, state and territory health ministers asked the federal government for "crisis funding" for hospitals as the nation prepares to lift pandemic restrictions.

Queensland Premier Annastacia Palaszczuk had threatened to keep the state's border closed to the rest of Australia until more funding was provided.

The federal government has not bowed to the pressure, with Prime Minister Scott Morrison telling Nine Radio the states and territories were responsible for running hospitals and the government had already "showered" the states with money throughout the pandemic.

United Workers Union public sector coordinator Adam Kerslake said the campaign called on the federal and state government to commit to actions that were "in the best interests of patient care and staff safety".

"Privatising beds and services isn't a solution to achieving a sustainable public health system," he said.

A spokesperson for Health Minister Greg Hunt said since taking office in 2013, the federal government's contribution for public hospitals services in Queensland under the National Health Reform Agreement (NHRA) has grown by 101 per cent.

"Over the same time period, Queensland government funding for their own hospitals has increased by just 53 per cent," the spokesperson said.

"In addition, to prevent a sudden shortfall in NHRA funding due to reduced activity during outbreaks and lockdowns we offered the states a minimum funding guarantee which has resulted in a $532 million payment to states and territories.

"When it comes to our health system there is a partnership in this country with the Commonwealth which funds and provides funding to states to support the public health system," she said.

"But there is also the responsibility on the primary and allied healthcare system of this country, which goes hand in hand.

"Since the pandemic, people have been saying that Scott Morrison had two jobs — that is, procuring the vaccine and managing quarantine.

"He failed at both.

"He had a third job as well. In fact, he has always had this third job — that is to properly fund the health system in this country.