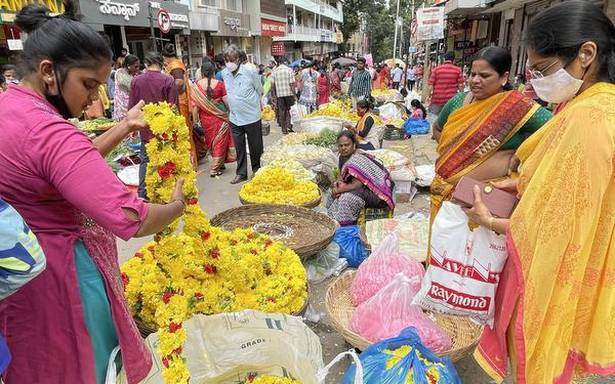 The rise in fuel prices has adversely impacted most essential commodities, whose rates are increasing in the city. This, coupled with an almost unprecedented increase in the prices of LPG cylinders and edible oils, has further squeezed household budgets and the festival season seems to have only made it worse.

This fiscal alone, petrol (₹104.7 per litre) and diesel (₹94.04 per litre) have seen a hike of 11.8% and 9.6% respectively, which has had a cascading effect. “Transport charges have obviously shot up by over ₹50 per quintal, for wholesale traders. Hence, the transport costs for farmers and retailers have also shot up and it is transferred to customers,” said Ramesh Chandra Lahoti, chairman, APMC Committee, Federation of Karnataka Chambers of Commerce and Industry (FKCCI)

The fuel price hike alone had contributed to a nearly ₹2 per kilo price hike of almost all commodities, industry sources said. Most of the pulses and cereals have seen a rise in this range.

As a result, households are finding it difficult to budget resources.

“My fuel bill was around ₹4,000 per month before the pandemic and now it is ₹6,500. Other expenses, like those of LPG, groceries, have all risen. I am fortunate that I still hold a job, though my salary has been cut by 20%. Many have lost jobs during the same period,” said Sukumar B., working with a private firm and who lives in Banaswadi.

The costs of all edible oils have almost doubled over the last year, while seeing a hike in the range of 30-45% since April this year. “It has shot up because of crop failures in Ukraine and Malaysia,” said Shailesh S. Ladhad, a leading oil merchant in the city.

While there is a hue and cry over the rising prices of branded refined edible oils, there has not been much difference in the prices of edible oils produced by local mills using cold-pressed technology.

Kirankumar of Chetana Oil from Challakere told The Hindu that barring slight variations in prices owing to the cost of groundnut, there has not been much of a hike in the prices of cold-pressed oil.

However, various oil brands by big companies have seen a steep hike.

Another senior trader said the edible oil sector was dominated by a handful of corporate firms. “They have become a cabal, like in steel and cement, and are artificially driving up prices. The recent farm laws, where edible oils were removed from the essential commodities list, has only helped these firms,” he said.

The price rise seems to have definitely dampened the festive spirit in the city. “Given the prices of oils, we have to think twice about even frying kadubus, a staple for Ganesh Chaturthi. With salary cuts and price rise, there is not much enthusiasm for the festival,” said Aishwarya, a homemaker from the city.

The only saving grace this festive season is that the prices of all vegetables and fruits are declining. However, the same cannot be said of flowers. While chrysanthemums, roses, and other flowers are affordable, jasmine and kanakambara are trading at ₹800 and ₹1,200 a kilo, respectively.

(With inputs from Girish S. Pattanashetti)