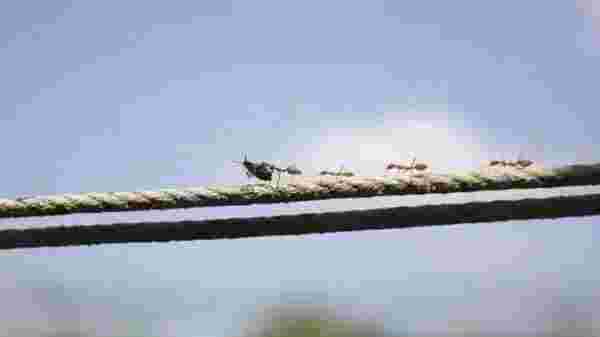 Sometimes the progress of scientific research can cause wincing. A few years ago, I found what certain biologists had done with certain Tunisian ants. One, they stuck bristles from a pig onto some ants’ legs, increasing the length of those legs. Two, they cut off the lower segments of some other ants’ legs—cue wincing—shortening those legs (bit.ly/3BmtcHV).

All in the service of science, naturally. The biologists were trying to understand how ants find their way home from distant food sources. These experiments showed that they seem to remember the number of steps they took to get to the food.

Gripping stuff, and of course I am a sucker for anything to do with ants, those marvellous perennially scurrying creatures. But now I’ve run across a research effort that is similarly wince-inducing, though this time not with ants, nor was it just biologists at work. This time there were mathematicians involved.

They pulled the wings off fruit flies (Drosophila melanogaster). All in the service of science, naturally.

Now fruit flies are small insects, so their wings are tiny pieces of tissue. Magnify them, and they are exquisite creations. Shaped like elongated teardrops and outlined with tiny bristles, they have a sparse network of veins running across their surface much like your palm, and are translucent, even iridescent. But to even get such a magnified view of a wing, you have to be very careful indeed with it after it is plucked—for it’s easily folded and damaged. The scientists put each wing plucked between two glass plates. Then they could be photographed and closely examined.

What were they looking for? Well, when you start studying evolution, there’s a point at which you run into a seeming conflict. Take us humans. Even though we have lived and flourished in utterly different environments, that has not pushed us to evolve into different species. On the contrary, all of us retain a certain sameness in form and ability to each other. Call this “robustness", and it’s the reason, wherever we find ourselves and in whatever conditions, we can all actually function as humans.

And yet there’s the inexorable logic of evolution too. For the species to evolve at all, individual human beings must show characteristics different from others. Those differences are what the process of natural selection builds on. To understand this, let’s say there’s a particular disease that’s running wild, striking down people left and right. But there are a few individuals who have something inside them that is able to resist the disease, so they survive. They were naturally selected to survive. When they reproduce, they pass on to their descendants that particular ability to resist. So that one different characteristic drives the evolution of a new generation of humans—but still humans—that is resistant to the dreaded disease. Call this “evolvability", and it’s the reason we can evolve.

This tension between robustness and evolvability—sameness and difference—has long intrigued evolutionary biologists. And this is what Madhav Mani, who teaches applied mathematics at Northwestern University, and a team of colleagues with an interest in biology set out to explore. According to their paper, they “put forward a general mathematical strategy for the direct quantification of the degree and nature of developmental robustness of a wholly integrated body organ" (bit.ly/3oH5fYy).

The “wholly integrated body organ" they chose was the Drosophila’s wing, partly because it has been extensively studied and many Drosophila genes are known to influence its development. The strategy involved direct comparisons of the 2,000 wings they had plucked and preserved. Given their distinct shapes and sizes, they found a mathematical way to standardize the wings so that they could be compared. Each was “computationally mapped to the interior of a fixed-sized disc ... [relying] on an efficient numerical implementation of the Riemann mapping theorem."

Never mind the computations that Riemann mapping calls for. What’s relevant here is that it distorts the boundary of the wing—teardrop to circle—and thus the various areas the wing’s veins mark out. The authors remark that they could apply this technique “to any 2D surface with no holes, with or without a boundary ... a simple 2D shape like the wing or the closed surface of a complex 3D shape such as a tooth, brain, or another body part." You could say, any shape whose boundary is less important to a study than what’s inside the boundary. Because the mapping doesn’t distort what’s inside—in the case of these Drosophila wings, it preserves the angles between intersecting veins.

The scientists say this approach is “both a strength and a limitation"—because while it underlines the variations in the patterns of the veins, it de-emphasizes any variations in the overall shape of the wing. But because the wings are now represented by discs of the same size, we can stack them on top of each other. This makes possible detailed comparisons between and across wings. In fact, they effectively had 30,000 points of comparison—each pixel in the image of the stacked discs.

And what story did this storehouse of data tell? The wings were much more similar than they were different. There were only a few characteristics in which they varied, like the shape and configuration of the vein closest to where the wing is attached to the body of the fly. Not only that. When one of these characteristics differed substantially from the norm, the others also differed. Remember that evolvability depends on differences, and here there were only these few differences to work with. But since the wings are so similar, these particular characteristics did not greatly influence wing development. Even so, these observed variations do suggest that wing evolvability hasn’t altogether receded in importance. It’s possible that future Drosophilae will have wings that have evolved a different look and maybe even function.

As one of the authors remarked, as flies grow to adulthood, they have a “magical ability to correct for differences and create a very robust final form." And this entire exercise—snapping off the flies’ wings, preserving them between glass plates, photographing them, applying Riemann mapping to them and then stacking them virtually—gives us a remarkable insight into the variations we see, or don’t see, in a given species.

Is that insight worth permanently disabling several hundred flies? Well, did the lessons learned about their perambulations justify clipping the legs of those Tunisian ants? Your answers may say something about your perspective on science.

Postscript: speaking of fruit flies. In my computer science days, they appeared in a famous example to show the difficulty of getting a computer to understand English. How would you write software to distinguish between these apparently similar sentences?

Once a computer scientist, Dilip D’Souza now lives in Mumbai and writes for his dinners. His Twitter handle is @DeathEndsFun