From Marrickville to Tokyo: Anthony Albanese goes down the rabbit hole and emerges on the world stage

On Monday morning, when Anthony Albanese woke up in his quiet Marrickville bungalow, it could have been any other ordinary day.

But by that evening, as he walked down the steps of the colossal RAAF KC-30 at Haneda airport in Tokyo, Albanese emerged on to the world stage as Australia’s 31st prime minister.

He was greeted on the tarmac by Japan’s state minister for foreign affairs, a military salute and a waiting motorcade of glossy black Toyota vans. It was as if, like Alice’s Adventures in Wonderland, Albanese had jumped down the rabbit hole and come out as an entirely different person.

Endowed with the authority of office, the insights of high-level security briefings and the confidence of a man who has just won the race of his life, Albanese presents himself in Tokyo with a newfound quality: solemnity. He is grasping the gravity of the moment.

With the spectre of Chinese aggression looming large over the Quad meeting between Australia, the US, India and Japan, Albanese made clear that while the government may have changed, Australia’s strategic outlook had not.

“This is a real opportunity for Australia to send a message to the world that while the government has changed, our values have not, in terms of support for democracy and engagement with important partners here,” Albanese said.

The prime minister was warmly received by the Quad leaders, particularly the US president Joe Biden, who embraced Albanese as the leaders gathered for the traditional “family photo” at the summit. The Indian prime minister, Narendra Modi, gave Albanese a friendly slap on the back, before resting a reassuring hand on his shoulder. The three men laughed together as if a reunion of old friends.

“What a great way to begin,” Albanese said with a smile.

The US president was clearly pleased with the prime minister’s attendance, saying his commitment to the Quad so soon after being sworn in was “testament to Australia being all in”.

“You got sworn in, got on a plane – and if you fall asleep while you’re here, it’s OK, because I don’t know how you’re doing it,” Biden said.

A long-serving staffer, possibly exhausted after the relentless six-week election campaign, shed a tear as Albanese spoke to the room of leaders, with the voice of a newly formed prime minister.

“It is an honour that this is my first act as prime minister to attend this important leaders’ meeting here in Japan,” Albanese said.

Behind him sat two of the most important people of his career – his friend and ally Penny Wong, now as foreign minister, and Tim Gartrell, his long-serving chief of staff. They look on like proud parents, almost needing to pinch themselves at the moment.

Later, at their first bilateral meeting, Biden and Albanese again exchanged friendly banter, flanked by officials on each side. Perhaps it is the bond of their shared Irish blood that makes them so at ease.

“I’m all over it,” Albanese jokes about his handle on the new prime ministerial gig, after Biden makes mention of his short time in the role.

“I am looking forward to having the chance to get to know you a bit more as a person,” Biden says.

The prime minister then recounts his time as a “young fella” on a US leadership program during which he spoke with interest groups “across the spectrum” from the National Rifle Association to reproductive rights group Planned Parenthood.

“You’re a brave man!” Biden exclaims, jumping to his feet to shake Albanese’s hand, after pretending to stage a walkout.

Albanese’s attendance at the summit will be cold comfort to China, who had been hoping Australia may take a softer approach to its strained relationship with Beijing.

But while emphasising Australia’s unchanged commitment to the shared values of democracy and a free and open Indo-Pacific, Albanese also used the trip for a diplomatic reset, indicating that Australia was ready to take greater action on climate change in line with the Quad’s ambitions.

“We will act in recognition that climate change is the main economic and security challenge for the island countries of the Pacific,” he said.

In a sign that the campaign of just a few days ago is well and truly behind him, Albanese was asked at a press conference if the summit had discussed Scott Morrison’s handling of the Solomon Islands security pact or the former government’s recalcitrance on climate change.

“I don’t intend to politicise this press conference while overseas or make any criticism of the former government,” he said.

The metamorphosis from candidate to prime minister is complete.

Or as Alice said: “It’s no use going back to yesterday because I was a different person then.” 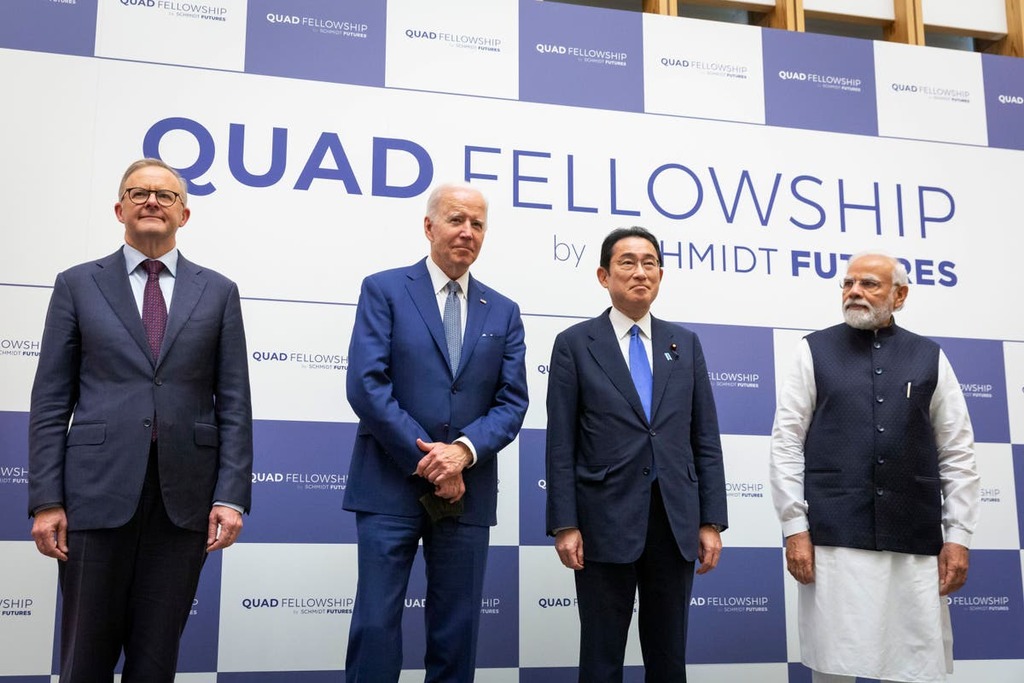 The Independent UK
One subscription that gives you access to news from hundreds of sites
Australian PM says goals aligned with Quad, wants group to lead on climate

Reuters
What is the Quad? What will they discuss? Why is it important Anthony Albanese attends?