From empty shelves to cancelled festivals: how Omicron is wreaking havoc across Australia

By Ben Butler and Peter Hannam 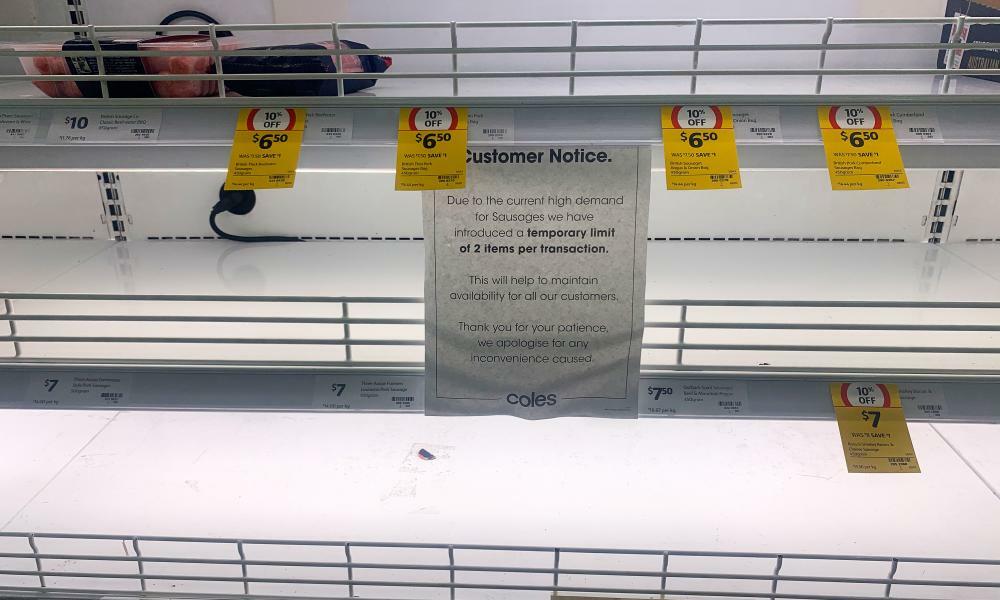 You could be forgiven for thinking you’d accidentally landed back in the first few months of 2020, so what is going on?

What is the national situation?

Australia’s food supply is at risk, businesses are having trouble staying open due to staff shortages and workers are losing income as the highly contagious Omicron variant of Covid-19 rips through the community.

There are already shortages of some types of chicken, and fresh fruit and vegetables could be left to rot on farms if supply chains can’t be quickly shored up.

Meanwhile, music festivals have been cancelled and businesses and unions say there’s an unofficial lockdown happening on the east coast as people shun retail and hospitality businesses in an effort to avoid catching Covid.

Is this caused by the urea shortage?

No. The shortage of adBlue, which is made from urea and used to reduce emissions from diesel engines, is not helping. But the main cause of the crisis is the fact that Omicron is extremely contagious – there were at least 630,000 new cases in the past week, almost double the number the week before.

And the true number will be higher again because testing has fallen and NSW is yet to start reporting the results of rapid antigen tests, as Victoria does.

The shortage of rapid antigen tests has also been a factor, businesses and unions say.

They saw the surge in case numbers once Australia opened up coming and in October asked the federal government to make rapid antigen tests free for small and medium sized businesses to test their staff.

The staff shortages have caused chaos as they ripple through the long supply chains that get the food we eat from the farm to the supermarket.

There is more to this than a shortage of truck drivers, although that is one of the key choke points.

For example, some types of chicken are in short supply because there have been staffing shortages in the boning rooms that chop up carcasses into thighs, breasts and the like.

On the other hand, fruit and vegetables are currently most vulnerable to delays in distribution centres that mean quick-to-spoil leafy greens could become harder to find.

Not all businesses are equally affected by the crisis. Those fortunate enough to have rigid testing protocols or a workforce that stays on one site appear to have faced less disruption.

But others, including retailers, say they are getting smashed and need urgent financial support from state and federal governments. Some say the situation is worse than during lockdown, when they at least had jobkeeper or disaster payments to keep the lights on.

The crisis comes on top of an existing shortage of staff that saw job vacancies surge as lockdowns ended in the September to November period last year.

Job openings jumped 18.5% from the previous three months to 396,100, or almost three-quarters higher than February 2020, the Australian Bureau of Statistics said on Wednesday.

Adding to Australia’s woes, the global logistics crisis has not gone away.

Problems getting goods from overseas ports and into shops will persist well into this year, Oxford Economics said on Tuesday.

With more staff off because of Covid, increased port operating hours may not be enough to clear out congestion, the UK-based forecasting group said.

It said truck drivers were also in short supply – a problem that needs higher wages and better conditions to fix – and “warehouses are bursting at the seams across many countries” due to a surge in online shopping.

When will it end?

No one knows. But there are more challenges ahead. Epidemiologists say the peak of the Omicron wave in NSW, which is currently Australia’s Covid hotspot, won’t be behind us until the middle of February.

At the same time, construction workers will return to sites at the start of February after their regular summer break – something that the secretary of the Australian Council of Trade Unions, Sally McManus, predicts will put pressure on the supply chains of the industries that feed into building.

Schools return after Australia Day, opening up another potential transmission vector from children to parents, although studies on Delta have suggested transmission rates in these settings may be low.

There’s also the looming prospect of an industrial dispute on the docks, with the Maritime Union of Australia and Patricks Stevedores on a collision course over the company’s threat to cancel an enterprise agreement governing working conditions – something the union says would “see Australian supply chains grind to a halt and the flow of vital household goods evaporate in an instant”.

So far, states have loosened isolation rules for people who are close contacts and work in key industries such as food manufacturing and distribution.

This buys some time, but comes at the cost of potentially increasing case numbers further down the track.

More measures could be announced after a meeting of national cabinet tomorrow – the Morrison government is considering relaxing isolation rules for transport and logistics, and looking to allow international students to work more than 40 hours a fortnight.

Morrison has also urged patience – something that is in as short supply as workers in the business sector, which is desperate for assistance now.

But so far there appears to be little appetite from state and federal governments to return to handing out cash to people and businesses.

What should be done?

“We need support, help and a solution which needs to start with assisting on cashflow for businesses,” Chrissie Maus, the managing director of Melbourne retail association Chapel Street Precinct, told Guardian Australia on Wednesday.

Unions support the call for free rapid tests for businesses but say keeping them going shouldn’t come at the expense of the health and safety of workers.

“What we’re seeing is employers trying to pressure people to come into work even when they’re sick, when they’re positive,” McManus told Guardian Australia.

She said people were concerned that if they said no they would lose their shifts.

“There’s not the national leadership that’s saying every day in the press conferences that workers are not to come to work if they’re sick and employers, you need to support workers, including if they’re casual considering paying them while they’re off,” she said.

“You know, it’s a free-for-all out there and we’re seeing the very worst come out in some employers.”