From ‘celebrating’ it to praising #PMSeditionMove: How news anchors took a U-turn on sedition law

Last November was tough on some of India’s favourite news anchors.

They spent the better part of a year praising the farm laws, demonising farmers, and fine-tuning “Khalistani” theories, only for the Modi government to repeal the laws – giving them barely a few hours to change their tune.

Something similar played out on primetime shows this week.

Yesterday, the Supreme Court stayed section 124A – sedition – of the Indian Penal Code until its reexamination by the central government is over. The centre and state governments were also directed to refrain from invoking sedition charges in FIRs; those already charged may seek bail.

The apex court’s interim order follows a batch of petitions – many of them filed by journalists – challenging the constitutional validity of sedition.

So, given these recent developments, viewers were witness to an exercise in backtracking. But to be clear – that the government plans to reexamine the law is a good thing. Our focus is on how these anchors changed their minds given that the move is headed by the BJP.

In 2016, Aaj Tak had warned students of forgetting “the boundaries of freedom of expression”, while other news channels set out to create their own narratives, irrespective of the facts.

But last night on her show Halla Bol, Aaj Tak’s Anjana Om Kashyap played it differently. When Congress spokesperson Supriya Shrinate expressed apprehensions about the BJP government bringing in other laws similar to sedition, Kashyap said, “Why are you suspicious of the government? The affidavit mentions the prime minister’s desire. He wants there to be a reconsideration. The government has removed many laws like these.”

Then there’s Republic TV’s Arnab Goswami who, in 2019, had “celebrated” – in his own words – sedition charges filed against Umar Khalid, Kanhaiya Kumar, and Anirban Bhattacharya. “We are all celebrating it!” he said. “...The ‘tukde-tukde’ gang is charged with sedition.”

His debate on May 10 on the sedition petition sang a different tune. While the channel flashed hashtags like #PMSeditionMove, Goswami was in praise of the central government for reconsidering it.

He also helpfully spoke on behalf of the government: “The government has told the Supreme Court, ‘Don’t worry, we are taking care of it...We have a track record of looking at things quite well.’” Thank you, Arnab.

On to Zee News chief Sudhir Chaudhary. In January 2019, he had said the chargesheet filed in the JNU sedition case was the “most positive news” of the week.

But on May 10, things took a turn. “No government has tried to remove this law since independence,” Chaudhary said fondly of the BJP. “Before 2014, there was no data on sedition cases. This started after Modi became the prime minister.”

Next up is Times Now. In April 2019, Rahul Shivshankar had described scrapping the sedition law as “giving a free hand to separatists on the pretext of protecting free speech”.

On May 10, his colleague Navika Kumar was grateful to the Supreme Court – and the centre. “We, the people of India, want the law to be removed,” she said earnestly, “because there is no place for such a law in our country.”

It remains to be seen how this will now play out in court – and on our TV screens. 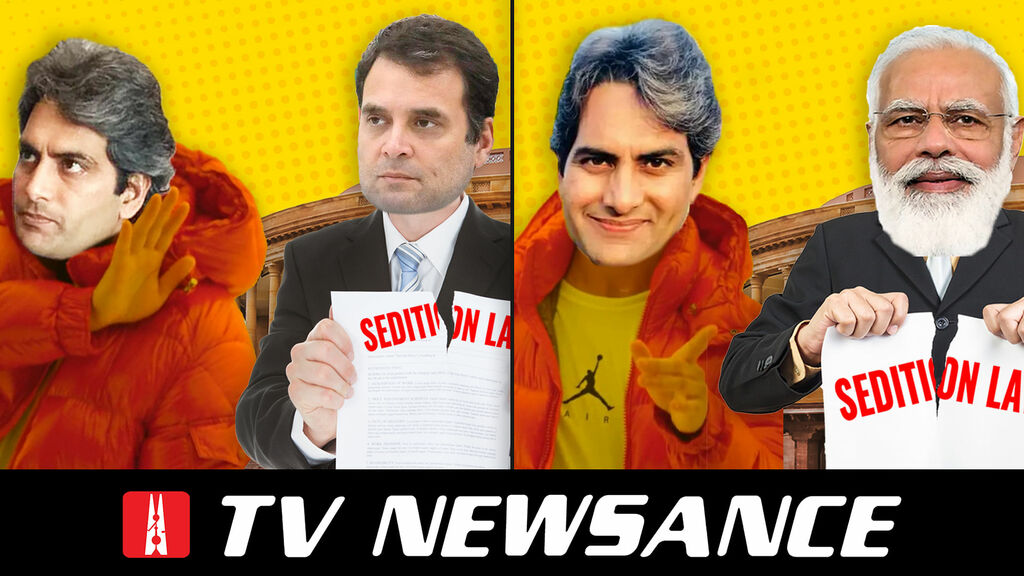 TV Newsance 171: Sudhir Chaudhary’s U-turn and bulldozers in Shaheen Bagh
The week kicked off with breathless coverage of a bulldozer in Shaheen Bagh. An Aaj Tak reporter clung on top…