Former United States President George W Bush has decried the “wholly unjustified and brutal invasion of Iraq” in a gaffe during a speech in the US state of Texas.

The former president, who launched the 2003 invasion of Iraq under the false pretence that the country was developing weapons of mass destruction (WMDs), meant to decry the Russian invasion of Ukraine during the speech in Dallas on Wednesday.

Instead, while criticising Russia’s political system, he said: “The result is an absence of checks and balances in Russia, and the decision of one man to launch a wholly unjustified and brutal invasion of Iraq.

“I mean, of Ukraine,” he said quickly.

He then said “Iraq too” to laughter from the crowd.

Observers were quick to seize on the startling apparent admission.

Several investigations have detailed how the Bush administration relied on faulty intelligence while misleading the public in the lead up to the war, with advocates calling for years for Bush and other officials to be held accountable for what has been called an illegal invasion.

Andrew Stroehlein, the European media director of Human Rights Watch, called the stumble the “Freudian slip of the century”.

Freudian slip of the century…

Wrote Pouya Alimagham, a modern Middle East historian at the Massachusetts Institute of Technology: “Wow – the one time Bush told the truth about the invasion of #Iraq.”

Added writer Maris Kabas in a tweet: “If I could tell my 17-year-old self one thing it’s that George W Bush will admit to unjustly invading Iraq in 17 years.”

The US invasion of Iraq, which was officially completed in 2011, has been directly attributed to widespread instability in the country that led to the rise of the ISIL (ISIS) armed group.

The UK-based Iraq Body Count Project has recorded as many as 209,422 violent civilian deaths in Iraq since the March 2003 US invasion.

When the initial invasion began, the International Commission on Jurists in Geneva said it represented a “war of aggression” that constituted a crime under international law.

In 2010, a Dutch inquiry, the first-ever independent legal assessment of the war, determined the invasion had “no basis in international law”.

A year later, the Kuala Lumpur War Crimes Commission found Bush and former UK Prime Minister Tony Blair guilty of crimes against humanity for the war. The verdict was not enforceable.

No but seriously, George W. Bush whisperingly affirms his own self-description as launching a wholly unjustified and brutal invasion of Iraq. He knows it, and he also knows that he’ll never face consequences even as they’re called for Putin. So it’s not funny, it’s impunity. https://t.co/waInFeCsOA

Video of Bush’s comment had been viewed about 10 million times on Twitter early Thursday, with some observers saying the slipup indicated more than just a guilty conscience.

“No but seriously, George W Bush whisperingly affirms his own self-description as launching a wholly unjustified and brutal invasion of Iraq,” tweeted Will Greaves, an assistant professor of international relations at the University of Victoria.

“He knows it, and he also knows that he’ll never face consequences even as they’re called for Putin,” he said. “So it’s not funny, it’s impunity.”

I gave eye witness testimony at KL War Crimes Tribunal in 2012 on US torture in #Bagram and #Gitmo alongside survivors #abughraib #Iraq. Bush and his acolytes were found guilty in absentia of war crimes and crimes against humanity. No joke. https://t.co/AgXTErieF2 https://t.co/Rg5SXoLyqa

“Bush and his acolytes were found guilty in absentia of war crimes and crimes against humanity,” he tweeted. “No joke.” 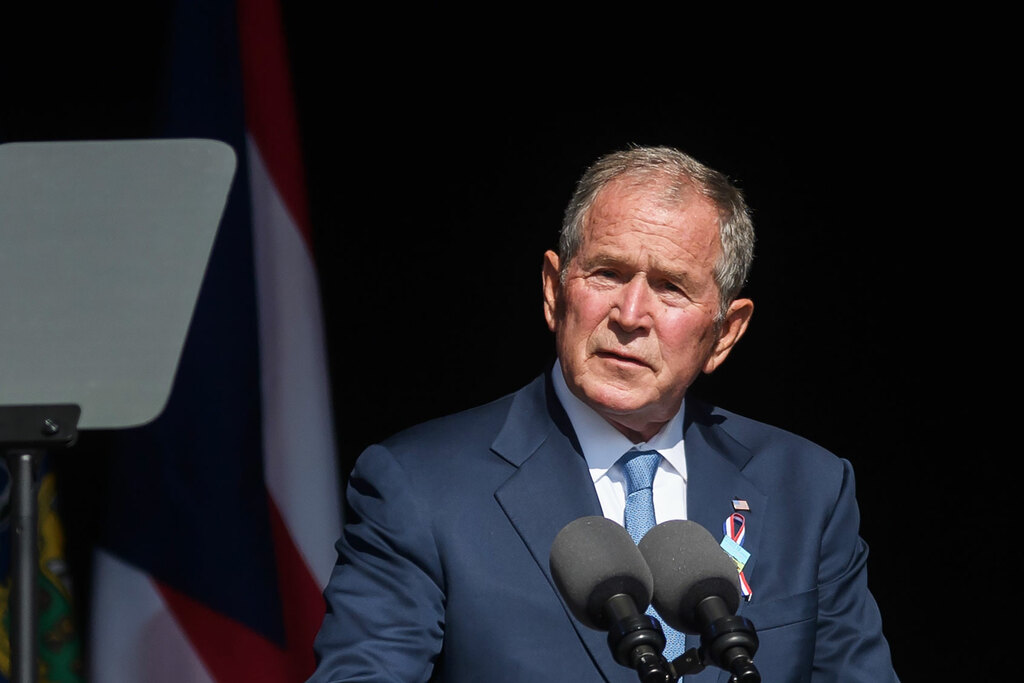 Bush condemns "brutal invasion of Iraq"
"Iraq too," Bush added to laughs from the crowd, leaving critics stunned and aghast