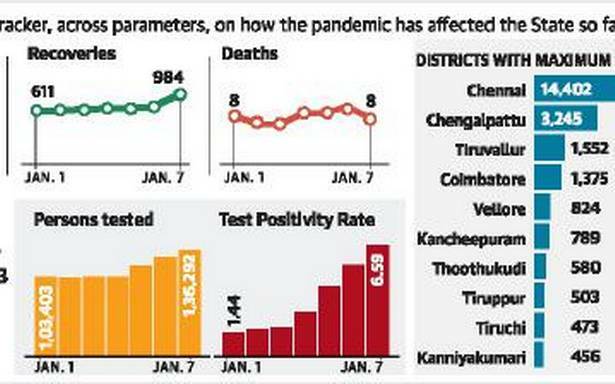 The number of fresh COVID-19 cases rose to 8,981 on Friday. Among them were five persons travelling from the United Arab Emirates; one person from the United States; and three persons arriving from Singapore had tested positive.

In Chennai, 5,77,392 persons have so far been infected, 5,53,075 persons have recovered and 15,652 persons are under treatment. The district did not record any death on Friday, however.

With 984 persons having been discharged, the total number of the recovered patients rose to 27,08,763.

Three of the eight persons whose deaths were recorded on Friday belonged to Chengalpattu. While five persons died at private hospitals, three died at government hospitals. Two deaths occurred in Coimbatore and one death each occurred in Tiruvallur, Tirunelveli and Karur. All of them had pre-existing health conditions.

Among them was a 39-year-old woman from Chengalpattu with deep vein thrombosis and pulmonary thromboembolism. She was admitted to Rajiv Gandhi Government General Hospital in Chennai on January 6 after testing positive. She died a few hours of admission. The hospital attributed her death to COVID-19 pneumonia. So far, 36,833 persons have succumbed to their infection.