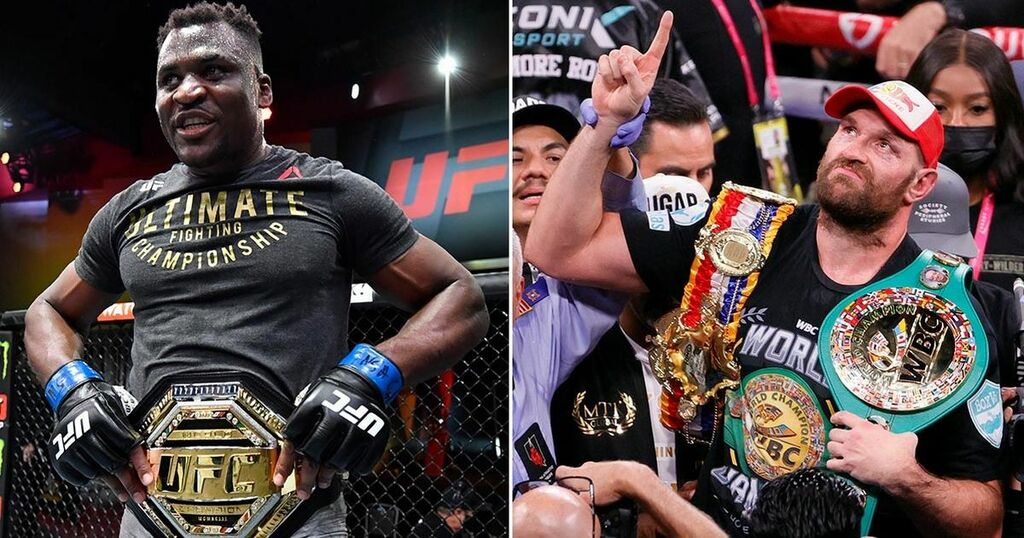 Francis Ngannou is confident he will be able to secure a fight with world heavyweight boxing champion Tyson Fury.

UFC heavyweight champion Ngannou called Fury out during a recent interview, and the Brit responded by offering a boxing match where both men wear 4oz gloves like the UFC.

Ngannou has indicated that he will insist on a clause in his next UFC contract that allows him to take at least one boxing match, saying that he wants to test himself at the top level.

And he truly believes that the fight with Fury is a possibility, one he gets past his next title defence against Ciryl Gane at UFC 270 later this month.

"I do believe that that fight will happen," Ngannou said during an appearance on the DAZN Boxing Show. "I think Tyson Fury wants that fight to happen too, so eventually it will happen at some point.

"I first started boxing, you know, MMA for me was an opportunity and as I always say, I want to have a little bit of recall of boxing, it's not one-off stuff."

Fury and Ngannou are both expected to fight different opponents in the coming weeks, although the boxer's next bout is up in the air due to legal issues surrounding mandatory challenger Dillian Whyte.

Whyte is appealing the WBC's ruling that he should be paid just 20 per cent of the split when he challenges Fury as the mandatory for their belt later this year.

And if no deal can be struck soon, Fury could instead take a non-title fight on March 26 against either Robert Helenius or Andy Ruiz Jr.

But time is not on the Cameroonian's side, and he says that he wants to get the fight done as soon as possible.

"I'm 35 years old," Ngannou continued. "It's not like I have a lifetime ahead of me. I'm very aware of my age and the stage of my career.

Who wins between Tyson Fury and Francis Ngannou? Let us know your thoughts in the comments section below!

"If I really want to do this, I think it's time to do it, but I don't see why that shouldn't be possible for them [the UFC] as well."

Ngannou will face a tough test, however, in the unbeaten Frenchman Gane, who has burst onto the scene since his professional debut in 2018, winning ten fights in a row to earn a title shot.

The pair trained together years ago in Paris, but have since become rivals, with Gane becoming the interim heavyweight champion last summer by beating Derrick Lewis.

They will meet at the Honda Center in Anaheim, California on January 22, with bookies pretty much unable to split the pair given Ngannou's frightening knockout power.

Gane is the more technically proficient fighter, but only one of his UFC opponents has been able to stop Ngannou from landing a vicious KO when they have fought.