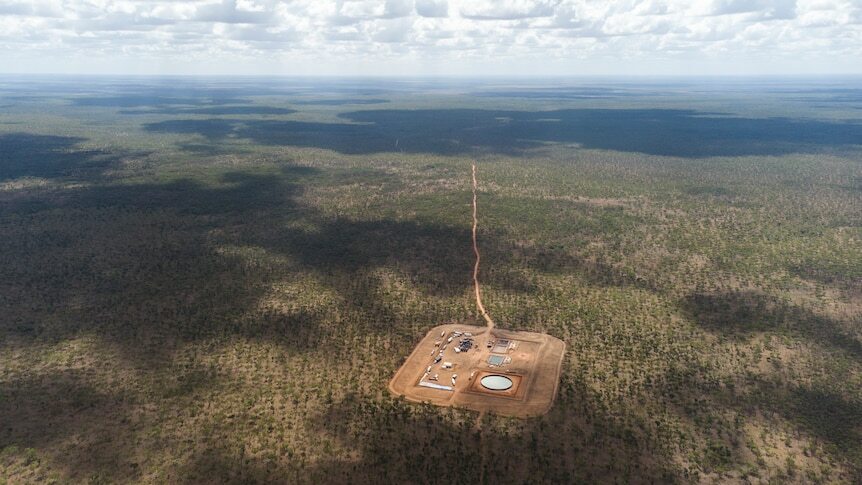 A gas company awarded millions of dollars in federal funding to speed up its fracking exploration in the Northern Territory's Beetaloo Basin has said it will begin some works within days, despite a decision on final environmental approvals still pending.

The drilling and fracking of up to seven gas exploration wells in the Beetaloo Basin about 85 kilometres south-west of Borroloola, has been labelled the "largest fracking project ever seen in the Northern Territory" by the NT Environment Centre (ECNT).

Gas company Empire Energy's subsidiary Imperial Oil and Gas was given $21 million in federal funding in July to "accelerate" exploration, sparking a senate inquiry and legal action by the ECNT.

The company did not have NT environmental approvals when the federal government's grant announcement was made — under the grant criteria, applicants only had to show they had "commenced" all necessary approval processes.

But a "partial" approval by NT Environment Minister Eva Lawler of the company's environmental management plan (EMP) has now been published online.

The approval related to civil works and land clearing, while a spokesperson said the minister was yet to make a decision on the parts of the plan relating to drilling and fracking.

There can be no exploratory drilling or fracking until that part of the plan is approved.

On Friday Empire Energy told shareholders in an announcement on the ASX that it expected to receive the outstanding approvals "in the coming weeks".

It said the approved construction of access tracks, water bores and land clearing needed would start in the "coming days".

The developments came after federal Resources Minister Keith Pitt said the grant agreement would be executed, despite the ECNT's Environmental legal challenge over fracking grants launched in the Federal Court.

In a statement released last week, he said it was important to "continue to get on with the job" of the government's gas-fired recovery agenda.

"This project, along with other activity in the Beetaloo Basin, has the potential to create over 6,000 jobs and make a significant contribution to secure Australia's affordable and reliable energy supplies," he said.

As part of the terms of receiving funding under the Commonwealth's Beetaloo Cooperative Drilling program – which is worth $50 million overall – gas companies must start works within three months of entering into a grant agreement.

Ms Lawler approved the overall plan with nine conditions recommended by the NT Environment Protection Agency, including mandating further research about the impact of potential land clearing on the native Gouldian Finch and expanding reporting requirements around greenhouse gas emissions.

In a statement, a spokeswoman for Ms Lawler said EMP was being considered in two parts and had now been "partially approved".

"The minister will make a decision on the part of the plan that relates to drilling and hydraulic fracturing following advice from technical engineers (petroleum engineers)," the spokeswoman said.

Ms Howey said her group was concerned the Environment Minister was awaiting advice from government experts from within the NT's Department of Industry, which she said was responsible for the promotion of the Territory's on-shore gas industry.

She said it was an example of the NT government failing to meet its promises around gas industry regulation.

"The Gunner government said it has implemented the Pepper inquiry recommendation that all responsibility of fracking be moved to the Environment Department and Environment Minister," she said.

"We absolutely disagree that this recommendation has been implemented."

On its accountability website, the NT government says it has completed a recommendation to ensure there is clear separation between agencies responsible for regulating and promoting the onshore gas industry.

A spokeswoman for Ms Lawler confirmed she was seeking advice from petroleum experts from the Department of Industry, Tourism and Trade.

But she rejected ECNT's claim the NT government had not fully implemented the Pepper inquiry's pre-exploration recommendations, including moving the responsibility of environmental approvals away from those who promoted industry.

"It is appropriate that the Minister for Environment takes into account expert advice from petroleum engineers when she considers an EMP that relates to hydraulic fracturing and drilling," the spokeswoman said.

Ms Howey also criticised the Commonwealth for proceeding with the grants program while her group's legal challenge was in train.

That matter will return to the Federal Court later this week.