Star Trek has always been political, and conservatives might want to look at actual history for proof. A recent Fox News op-ed titled, “Star Trek writers take Starship Enterprise where it's never gone before—woke politics,” argues that this political direction of Trek is somewhat new, and therefore, wrong.

The article specifically points to a Stacey Abrams cameo in Star Trek Discovery Season 4 and a reference to the January 6 insurrection in the series premiere of Strange New Worlds as proof that liberal writers have gone off the rails. Here’s why the premise of that argument is deeply flawed and historically incorrect.

Was Star Trek ever centrist?

While it might be easy to dunk on this op-ed, in Strange New Worlds, Captain Pike did recently remind us about having an honest “debate.” So beyond the hyperbolic headline of the Fox piece, it appears the author, David Marcus (no relation to Captain Kirk’s fictional son!), is a genuine Star Trek fan who seems to faithfully watch the new shows. He’s also a conservative, which, historically, while rarer in the Trek fandom than non-conservatives, isn't entirely unheard of. (Republican Presidents Ford and Reagan both identified as Trekkies.)

When you peek beyond its misleading headline, you’ll find that Marcus’s op-ed is mercifully not actually about “owning the libs” or slamming “woke” culture. However, he makes one massive historical error in his premise when he writes that Star Trek has “crossed a line where no Star Trek has gone before. That is to say, they got directly involved in partisan politics.”

This seems to imply Star Trek has some history of centrism. That couldn’t be farther from the truth.

Protesting against the Vietnam War was a partisan issue in 1968. And outside of its more famous moments of racial representation, the classic Star Trek actually did, overtly, support protesting the war by talking about it specifically in one notable episode.

“A Private Little War” is probably remembered more for scenes of Kirk getting seduced by a witch doctor, and Bones phasering a giant alien ape called a Mugato. However, the basic themes of “A Private Little War” are far more overtly political than the Discovery or Strange New Worlds episodes that Marcus takes issue with. The Enterprise faces a situation in which the Klingons are clearly coded as the U.S.S.R., and Kirk starts to act like the US government, arming and aiding people on “our side” to fight against “their side.” Bones and Kirk only talk about Vietnam as a historical precedent, which, of course, breaks the show’s reality a bit and instantly dates the episode.

In his op-ed for Fox, Marcus complains that Strange New Worlds showing images from the January 6 Capitol Riots is “jarring and also breaks the narrative spell of fantasy and science fiction, which is why people tune-in in the first place.” And yet, Captain Pike and Spock are less specific in their critiques of American history in Strange New Worlds than Kirk and Bones were in “A Private Little War.” Marcus even acknowledges this when he writes, “To be fair since the original 1960s series, Star Trek has always delved into cultural and societal issues.”

The Voyage Home (the one with the whales!), released in 1986, was a political movie more overt than anything in Discovery Season 4 or Strange New Worlds Season 1 (so far). There are countless other examples of this throughout Trek canon, but because Marcus seems to reference “A Private Little War,” when he mentions Star Trek “reflecting American and global foreign policy,” and because he was aware of a very pro-Greenpeace film with The Voyage Home, additional examples (of which there are countless!) aren’t really required. In short, his own examples disprove the premise. Well before Discovery, or even The Next Generation, Star Trek has always been partisan — and politically liberal.

Marcus’s smoking phaser — the one he claims can prove all the new Star Trek shows are blindly supporting the Democratic Party — is the now-famous cameo from Stacey Abrams in the Season 4 finale of Star Trek: Discovery. In it, Abrams briefly, plays the President of Earth. Marcus calls this a “blatant example of electioneering,” which, within the context of both the nature of the cameo and the episode itself, just isn’t true.

If you look at what Michelle Paradise actually said about the casting of Stacey Abrams, you’ll find two things. First, Abrams is a lifelong Star Trek fan, and second, the cameo isn’t as overtly political as conservative naysayers might tell you. Yes, Paradise cops to what Marcus would call “partisanship,” but hey, that’s okay! As just demonstrated, Star Trek has been doing that forever. Here’s what Paradise told Inverse when the episode aired:

“We weren’t looking to make history... We approached it from a very organic place of, What do we need from this character? Stacey Abrams, what she’s done, what she continues to do, the values that she embodies, all of that feels like who we wanted representing this moment.”

In other words, if a conservative wants to get mad because Stacey Abrams is a Democratic politician and because the Discovery showrunner admitted to being partisan, they can. Michelle Paradise isn’t trying to please everyone, and neither was Trek creator Gene Roddenberry.

Abrams herself was unaware of any major story details of Discovery Season 4 because, as a fan, she wanted to be kept spoiler-free. Her cameo, while symbolic to those of us who share her political ideology, does not, in fact, insert any kind of specific “agenda” into the series.

Marcus draws conclusions that I don’t agree with at all, and his ontology runs counter to the facts of how Star Trek was created and written over nearly six decades. That said, in the spirit of what Captain Pike actually said and meant in the Strange New Worlds premiere, Marcus didn’t present a viewpoint that was rooted in hate. If left-leaning Trekkies (most of us!) can disagree with (non-hateful) right-wing Trekkies, but do so with intelligence, thoughtfulness, and respect, then the power of Star Trek is helping to change the world.

Even if it’s only through minor discourse about a sci-fi TV series starring people wearing brightly color-coded costumes. 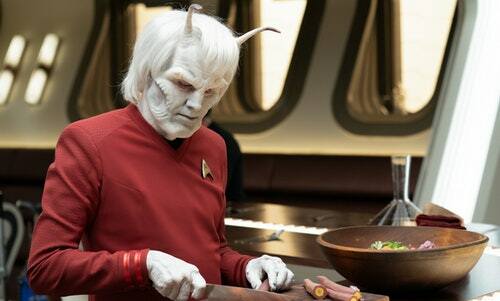 'Strange New Worlds' actor reveals why Hemmer is Star Trek’s own “Daredevil”
In 'Strange New Worlds,' we learn Scotty's predecessor had something no Starfleet engineer ever had before. Here's what actor Bruce…

Inverse
One subscription that gives you access to news from hundreds of sites
53 years later, Star Trek rebooted the miniskirt uniform — with a gender-neutral twist

Inverse
What's with all the cameos in Doctor Strange in the Multiverse of Madness?