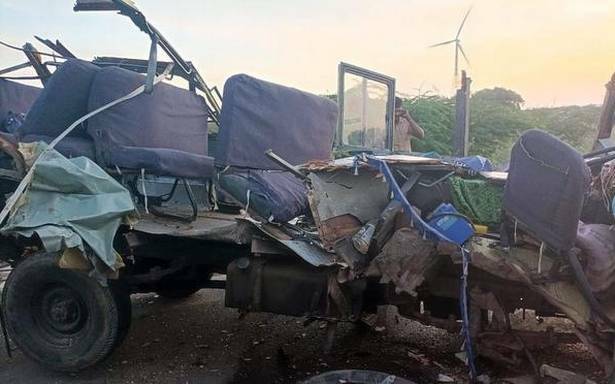 Four women workers died on the spot and 10 others suffered multiple injuries when a passenger van and a water lorry collided head-on at Pudiamputhur in Thoothukudi district on Thursday.

Police said that daily wage earners from Oddapidaram and surrounding areas were picked up in vans by many companies, situated in the SIPCOT industrial estate. At around 7 a.m., the vans picked up the workers and left with them for the industrial estate. About 15 workers were travelling in a van towards Thoothukudi, when a water tanker, heading to Puthiamputhur from Thoothukudi collided head-on with the van. In the impact, a major portion of the van was damaged.

While the van driver and nine others suffered injuries, police identified the deceased as Selvarani (45) wife of Ganesan, Kamatchi (40) wife of Ravindran, Sandya (48) wife of Arumugam and Manimegalai (20) daughter of Adaikalaraj.

Superintendent of Police S. Jeyakumar, DSP Ponnarasu and others visited the accident spot.

The Pudiamputhur police have registered a case and sent the four bodies to the Thoothukudi Government Medical College Hospital for post-mortem examinations.

The lorry driver, identified as Pandaram (41) of Nainarpuram has been arrested. Further investigations are on.