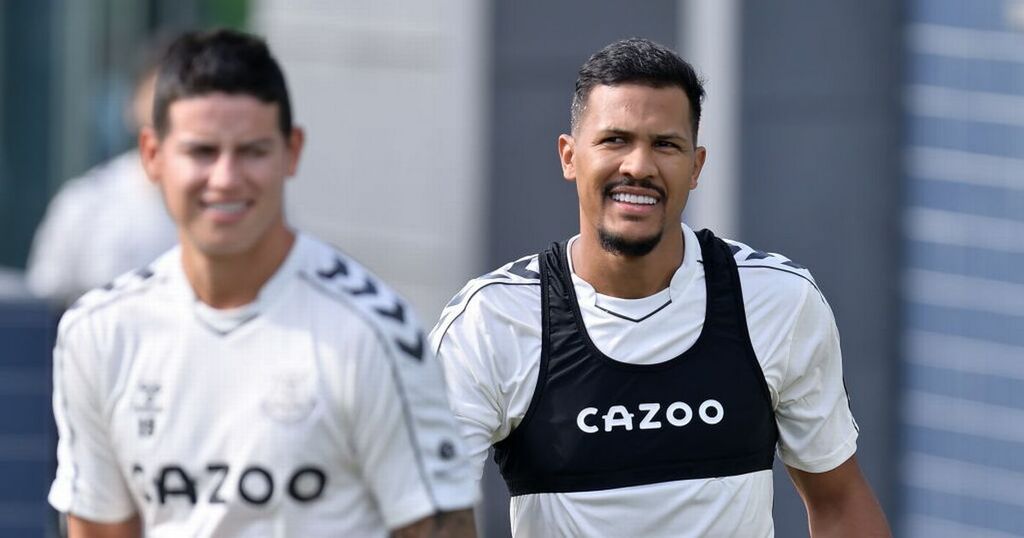 Everton's squad are back at Finch Farm and preparing for their important match against Burnley on Monday evening.

The Blues have got the campaign off to a strong start under Rafa Benitez, winning three and drawing one of their four matches in all competitions before the first international break.

New signings have settled into the squad well, the side have shown some good attacking football and fans are beginning to have promising thoughts about the upcoming campaign.

With the first round of international fixtures out of the way and with the squad back after being afforded a few days to themselves, hard work must turn back towards the Premier League.

Everton have released their latest round of training images from Finch Farm ahead of Monday's clash with Burnley, and there are some interesting points to take from them.

The standout aspect of Everton's newest set of training pictures is Salomon Rondon.

The striker, who joined the Blues late on transfer deadline day, has arrived on Merseyside and has now taken part in his first sessions as a Blues player.

It looks to be all smiles for the Venezuela international as he takes his first steps onto the pitch at Finch Farm, before getting down to some hard work.

The 31-year-old will hope to be involved when Everton take on Burnley at Goodison Park on Monday evening in their first match back following the international break.

Rondon was also pictured receiving instructions from his new manager Benitez, who clearly wasted no time in getting re-acquainted with a player he's already linked up with twice before.

The pair look deep in conversation in the images, perhaps pointing towards the kind of important role he will take as the 2021/22 campaign progresses.

Of course, there's one other player that has taken a lot of the limelight over the last few weeks, and today is no different.

Evertonians have been left wondering about the long-term future of James Rodriguez throughout the summer as a potential transfer for the Colombia international always seemed to be rumoured.

The playmaker was told that, if the right offer came in, that he would be allowed to leave - but nothing materialised before the deadline passed last week.

After late rumours of a potential switch to Turkey also fizzled out before their window shut, it was back to work for the former Real Madrid man on Thursday afternoon.

With Everton's players afforded some days off over the course of the break, Rodriguez took the opportunity to fly out to Ibiza and spend some time there with friends.

Now though the 30-year-old is firmly back on these shores and could be looking for his first Premier League minutes of the campaign when Burnley come to Goodison on Monday.

While there have been some welcome returns to Finch Farm, there are still a couple of absentees in the latest round of training pictures.

Thankfully, however, they are ones that you might expect for the time-being - for the most part at least.

While some stars did not travel for international duty over the last couple of weeks, including Richarlison and Yerry Mina, others were called up to represent their respective countries.

As such the likes of Jordan Pickford was not pictured in the latest round of images, but he is expected be back at Finch Farm soon to prepare for Monday's match.

Seamus Coleman, meanwhile, has already returned to the training complex after picking up a hamstring injury while away with the Republic of Ireland.

Early indications are that the problem is not as bad as first feared, so we might see the club captain back involved in sessions sooner rather than later.

While it is unfortunate to have Coleman out through injury, it seems that Benitez might be able to welcome back some other players to the fold.

Mina missed the clash with Brighton due to a knock, which also kept him out of Colombia duty, but he was pictured all smiles back at Finch Farm and looking like taking part in sessions.

Ben Godfrey has missed all of Everton's matches at the beginning of the campaign, but he was also pictured heavily involved in the sessions ahead of the visit of Burnley on Monday.

Jean-Philippe Gbamin missed the Blues' last match against Brighton with a tooth abscess, but he is another who is back at the training complex and looking ready for action once more.

Finally, the fitness of Dominic Calvert-Lewin is a little up-in-the-air after he was forced to pull out of England international duty with a thigh strain picked up just before the break.

However, the striker has been pictured challenging Ben Godfrey for a header, seemingly indicating that he could be ready for some involvement on Monday.

Fingers crossed that is the case, as Benitez would love some injury boosts this weekend.