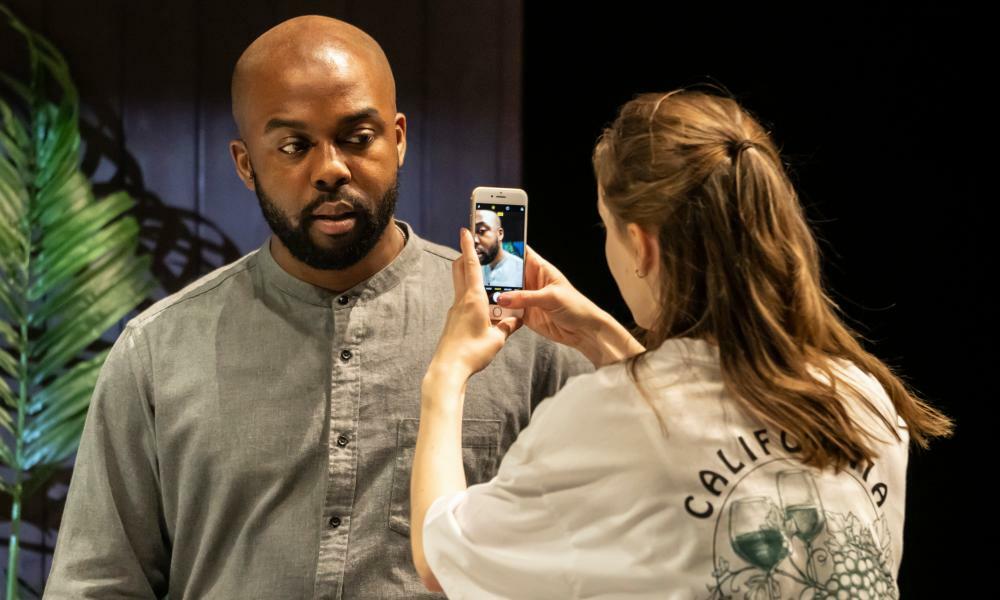 In the summer of 2020, following the murder of George Floyd, protests began in Washington Square Park, a pigeon’s flight from Suzan-Lori Parks’s New York apartment. Parks and her son went almost every day, marching and chanting and waving signs, helping America along in its overdue racial reckoning.

Parks, 58, a Pulitzer-winning playwright and in-demand screenwriter, has been doing this for decades, though rarely with so much cardboard and poster paint. Her work – lyrical, incantatory, bleak and bright – digs into what she has called, in her 1993 drama The America Play, “the great hole of history”, the exploitation and exclusion of Americans of African descent. So it’s no surprise that Parks has written precisely the play for this anguished moment, White Noise, which had its UK debut at the Bridge theatre in London this month. The surprise is that she wrote it years ago.

In 2014, Parks found herself in the audience at New York’s Public theatre, watching performances of her 1860s-set play Father Comes Home from the Wars (Parts 1, 2 & 3). In one scene, the play’s protagonist, named Hero, wonders about life after slavery. When white patrollers stop and ask him who owns him, what will he say? Parks knew that her next play would try to find an answer.

She finished White Noise two years later. Her most realistic work to date, it centres on four friends – two are Black, Leo and Misha, and two are white, Ralph and Dawn. One night Leo, who suffers from debilitating insomnia, goes for a walk. Police stop him and shove him to the ground before letting him go. Leo, an artist, has freedom. But he doesn’t feel free. And he no longer feels safe. So Leo comes up with a radical proposition: he wants Ralph to own him, for 40 days, and to offer him the security that a well-connected white man can provide.

“So, Ralph, bro, in exchange for this protection I’m talking about, I will be your enslaved person,” Leo says.

It’s one hell of a provocation, which Parks knows. “I was basically ripping the face off of civilisation!” she says, punctuating the words with an exultant, “Ha, ha!” White Noise strips away the well-meaning lies we may tell ourselves about freedom, about equality, about justice. It pushes its audience to ask how we can live with ourselves and each other when our current systems fail so many of us.

I meet Parks at a cafe near her apartment. She bounces up in boots, miniskirt and fuchsia hoodie, with the thick black glasses associated with brutalist architects and the energy of a stadium-packing motivational speaker. Erudite and irrepressible, she is a figure of great moral suasion.

White Noise namechecks Afro-pessimism, a philosophical orientation that sees anti-Black violence and exclusion not as an accident of civil society, but as one of its underpinnings. The drama traffics in this discourse, but pessimism has clearly never been Parks’s thing. She sees her plays as acts of Afro-optimism, not necessarily for their content but for how they may affect their audiences.

I saw White Noise when it debuted in 2019 and I tell Parks about a scene that disturbed me, in which Leo puts on what is allegedly an antique slave collar, an instrument of torture meant to keep slaves from escaping. I’d had an impulse to remove that collar, even as I knew I shouldn’t interfere with the play.

Parks takes this as a sign that the play worked as intended. “Good!” she says. “You should feel bad. Because that’s the feeling that we all should have when we see injustice, anywhere.” The trick, she says, is to bring that feeling with me once the play ends.

“Can every moment of your life, or at least a few moments from here on out, be dedicated to that very thing that you couldn’t do in the theatre?” she says. “That’s why we do theatre. It’s a healing thing.” And it is, Parks insists, joyful too. “There is a joy in telling the truth,” she says.

In the original, the foursome hung out in a bowling alley – but that’s now been changed to a gun range

In 2019, Parks had worried that the play was out in front of the culture. “A lot of my work is kind of ahead of its time, because a lot of writers, we feel things. We’re feeling things before they’re being actually said.”

She watched audiences take it in, sometimes leaning forward in their seats, sometimes leaning back, not necessarily ready for this truth. “People had a hard time, like, ‘Why do you have to go there?’” But 2020 went there for them. Which means that reality has caught up to White Noise and it can help them have some uncomfortable conversations about race and class, conversations they may now be more primed for.

Last year, while Parks was working on a project called Plays for the Plague Year, she made a few revisions to White Noise. In the original, she had invented a bowling alley as the hangout spot for the foursome. She had originally wanted a gun range, but that had seemed a little on the nose. But now the world is all nose. So the gun range is in.

If that troubles an audience, well, Parks thinks, that’s good trouble. Because theatre wasn’t invented to make us smile and nod and buy the branded hoodie at intermission. “Let it move you to be something,” she says.