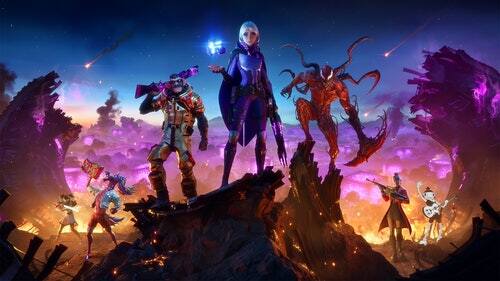 Fortnite Season 8 brings many features with it, including a new mechanic called Color Bottles that essentially replaces Alien Artifacts from Season 7. They can be used to customize your Toona Fish skin.

Below, we outline all you need to know about Color Bottles and list all 63 locations you can use to customize your Toona Fish Battle Pass skin. Want to bring a little bit of color to your black and white aquatic pal? Here’s where you need to go.

What do Color Bottles do in Fortnite?

In many ways, Color Bottles are very similar to the Alien Artifacts that were released on a weekly basis during Season 7.

The only difference is that, unlike the Artifacts that added a wide assortment of customization parts to the tier 1 Kymera skin, Color Bottles add a variety of color styles to the Toona Fish skin that’s also unlockable at tier 1. Some Color Bottles are also required to unlock character-themed variations as well, which are largely dependent on the Rainbow Ink exclusively earned in Chests.

Players must collect three Bottles of each individual color to unlock the variant. Thankfully, the trio of Bottles are all located within the same places of interest.

That brings us to our main order of business, which is locating all 63 Color Bottles required to unlock the 21 color stylings of Toona Fish. Below you’ll find the images and video footage necessary to make your fish as bright as they can possibly be. Note that the Toona Fish skin must be unlocked, and potentially equipped, for these Color Bottles to appear in-game.

Next, head through the doorway under the stairs to your left.

Finally, double back, take a left, and go up the winding wooden staircase. Keep going up till you reach a landing with a Color Bottle on your left.

Y-Labs Magenta in Misty Meadows: For the first Color Bottle, head to the location marked here. Climb on the roof of the house directly next to the bank, which is signified by the pig sign.

Next, head straight ahead and take a left at the blue building. Pass under its deck, and you’ll come to this house. The second bottle is on the roof.

Last but not least, the third magenta Color Bottle sits on the roof of McGuffin’s book shop.

Cuddly Pink in Steamy Stacks: For the first Color Bottle, go up the staircase next to the southernmost stack.

Next, go inside the stack to find the second bottle.

Last, ascend the winding tower staircase inside the stack till you reach this landing.

Ruby Red in Locke’s Lighthouse: This one is really easy, as long as you know this is the location of Loke’s Lighthouse in Season 8. As usual, it’s on the island northeast of Coral Castle. The first bottle is outside the lighthouse, the second is about halfway up, and the third bottle is at the top.

Renegade Red in Boney Burbs: Land here, and you’ll come to a long bridge connecting two parts of the PoI. The first red bottle is on the bridge.

To get the second bottle, hang a left from there till you reach this clearing.

To get the last bottle, go up the nearby staircase. You’ll see the bottle waiting for you once you reach the top.

Pumpkin Orange in the Orchard: It’s on a little carriage towards the front of the farmhouse.

There’s another bottle if you head straight past the picnic tables and approach this tractor pull.

Lastly, hop the fence and snag the third Pumpkin Orange Color Bottle under this awning.

Midas Gold in Catty Corner: From here, use a tire to bounce to the top of a blue storage container with wooden scaffolding on top.

The second Color Bottle is straight ahead from there, directly behind the Respawn Van.

Finally, go into the garage of the nearby gas station to procure the last one you need.

Desert Sand West of Pleasant Park: For this one, just head to this busted area east of Coral Castle.

Hop into the current below, and you should find all three Color Bottles somewhere along the way.

Banana Yellow in Rainbow Rentals: Rainbow Rentals is on this coastline south of Holly Hedges. Get the first bottle on the shore next to a fishing pole barrel, and the second Color Bottle is found inside the yellow stilted house nearby.

If you leave the yellow house through its rear entrance, climb up the hill straight ahead to reach this area with a large tree. The Color Bottle sits under the tree.

Leafy Green in Stealthy Stronghold: This one’s a bit difficult to describe in text because so many parts of Stealthy look so similar to one another, so we’ll hand it over to HarryNinetyFour, who reveals all three Leafy Green Color Bottle location in under one minute in this video.

Recruit Green on the Weeping Woods Bridge: Head to this section of Weeping Woods, on the border of the darkened area. You’ll come to a shack with some stairs leading up to it. Go up the stairs to get the first bottle.

Next, make your way to the end of the Weeping Woods bridge, shown here.

You’ll see the third Color Bottle just as you head down the stairs on the other side of the bridge.

Codename GRN in Corny Crops: The first Color Bottle is in a cutout in the corn fields near this location. You should find it near a group of boxes.

Next, get to the corn fields past the cabbage patch to find the second Codename GRN Color Bottle.

Lastly, for a third Color Bottle, look for this alcove next to the tractor.

Ghoulish Green in Shanty Town: Shanty Town is found on the southwest side of the map, west of Sludgy Swamp. When you get there you’ll see the first bottle above the contraption in the center of the circle of houses.

Under the house north of there is the second bottle.

The third Ghoulish Green Color Bottle is under the other nearby house that has these stringed-up boxes sitting underneath. Just look under all the houses in the circle, and you should easily find the three bottles.

Slurp Turquoise in Sludgy Swamp: On the southwest side of Sludgy, look for a Color Bottle near an exposed pipe.

Head past the fences straight ahead to get another Color Bottle on top of this pipe that’s jutting out of the ground.

Pass through the main entrance near the Respawn Van to get the third Slurp Turquoise Color Bottle.

Diamond Blue in Gorgeous Gorge: This one is also very easy. You’ll find the first Color Bottle on the edge of the waterfall, another one on the way down, and a third in the water at the bottom.

Frozen Blue in Coral Castle: Start by getting the first Color Bottle outside the main castle area.

Go in through the bottom entrance and you’ll find a second Color Bottle atop this pillar.

The last one is at this small hut straight ahead from the previous location.

Crystalline Blue in wreckage south of Dirty Docks: This is another one that just requires passing through the cube current at the depicted area. For this Color Bottle, a video from HarryNinetyFour also illustrates the best route to take.

Brite Purple in Retail Row: This location is to the east, directly outside McGuffin’s. You’ll see it at the entrance to the left.

The second Color Bottle is at the front desk.

The third is right nearby.

Mesmerizing Violet in the Wreckage South of Believer Beach: Head to this spot and once again follow the current to get all three Color Bottles.

Robotic Grey at Destroyed Dish: For the first location, climb the wreckage near the current, but don’t go inside it.

Jump off straight ahead from the location of the first Color Bottle and go up the two flights of stairs till you reach this platform.

Lastly, turn around and find the third Color Bottle under his awning.

Stone Grey on Mount F8: For this last Color Bottle, all you have to do is scale the mountain marked below. The first bottle location features a flag to mark the spot.

Keep going up, and you’ll see another location marked by some metal objects sticking out of the snow cover.

You’ll find the final Color Bottle at this spot near the summit. That’s all you need to know to collect every Color Bottle in Fortnite Season 8.