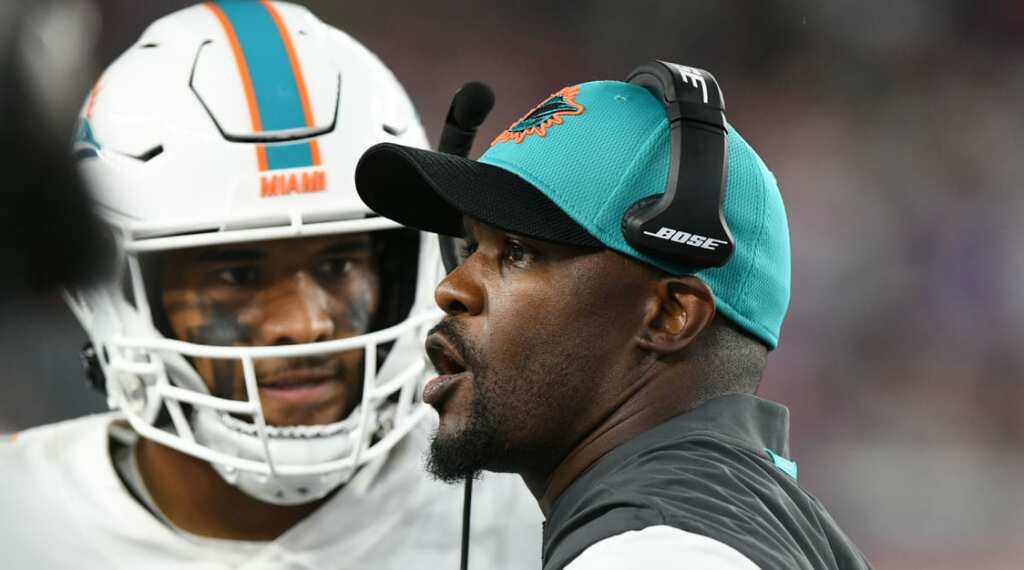 The NFL coaching carousel has been very active this month, but no move was more surprising than Brian Flores's dismissal from the Dolphins. Issues between Flores and starting quarterback Tua Tagovailoa were reportedly a factor in the decision, and on Thursday, former NFL general manager Michael Lombardi revealed some pretty shocking details about that relationship before walking back his report on social media.

During Thursday's episode of his podcast The GM Shuffle, Lombardi addressed the issues that prospective Dolphins coaches may have being honest about Tagovailoa. Lombardi said that Flores outright told the young QB that the Dolphins should drafted Mac Jones in 2021.

“If you're honest, are you really gonna sit there and say, ‘I can build a team around Tua?’ 'Cause that's what [Dolphins owner Stephen] Ross wants to hear,” Lombardi said. “That's what Brian Flores wouldn't say. I mean, we've seen all the conversations that Flores had with Tua."

“I remember I said there was commentary between the head coach and Tua during the season and I wouldn't reveal what the conversation was. Well, the conversation was, ‘Hey, if I'd have knew you were going to be this bad, I would have picked Mac Jones.’”

Whether or not it's a fair evaluation, it's jarring to see a report that a coach would say that so matter-of-factly to his starting quarterback. After Lombardi's statement began to make the rounds on social media, he walked it  back in a tweet, saying that he misspoke and those were his own words on the Dolphins situation, not Flores's.

Flores spent 2004–18 with the Patriots, working his way up from scouting assistant to linebackers coach before landing the Dolphins job. Lombardi worked with Bill Belichick as a member of the Browns front office in the early 1990s, before becoming the GM of that franchise from 2013–14. He and Flores overlapped in New England from 2014–15, when Lombardi served as an assistant to the coaching staff, and Flores coached safeties.

Flores is expected to be an immediate candidate to fill one of the other new openings in the NFL's head coaching ranks.