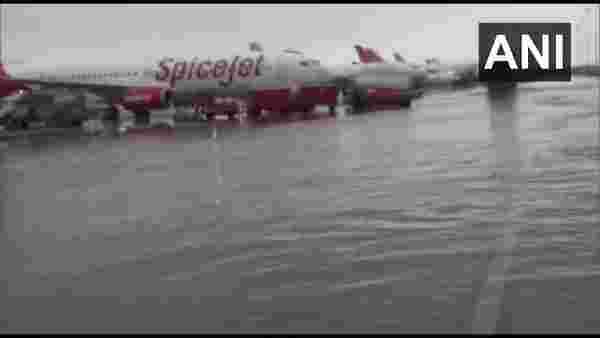 Reddy, who had the longest stints as a member (2005-2010) and as vice-chairman (2010-2014) of the NDMA, also suggested widening of a drainage system from Delhi airport's terminal three to Najafgarh to check flooding.

"It is a matter of great concern that the world-class airport in Delhi was flooded on the morning of September 11, 2021, causing severe disruption to the public -- about 100 flights were delayed and five diverted," he said in the letter to Scindia.

In a statement on Saturday, the spokesperson of Delhi International Airport Limited (DIAL) said the airport operator has been requesting the state and the central government agencies for the past few years to widen the underground drainage system that goes from terminal 3 to Najafgarh.

The spokesperson had said that due to sudden extremely high downpour, the forecourt of Terminal 3 of Delhi Airport saw some waterlogging, which was cleared within a few minutes.

In his letter, Reddy said Delhi has been experiencing very heavy rainfall and the previous day's rainfall may have saturated the soil, but this type of flooding yesterday was certainly avoidable.

He said there is a 17-metre steep gradient between National Highway 8 (NH8) and T3. Due to this, the entire area in between acts as a catchment and drains water towards T3, Reddy wrote in the letter.

"Normally, this water gets cleared by the drainage system from T3 to the Najafgarh Drain. Apparently, this did not happen," he said.

Reddy highlighted a media report of a major rainfall event on September 15, 2011, when the national capital had recorded 117 mm of rain in three hours and severe flooding was experienced inside the baggage belt area at T3 arrivals and other parts of the Delhi airport.

"I am given to understand that consultants were hired by the operator of the Delhi airport for ₹70 lakh in 2011-12 to address this issue. It appears that their recommendation was to widen the drainage system from T3 to the Najafgarh drain. Regretfully, this has not been implemented even after so many years," he said in the letter emailed to Scindia.

This time, the airport got flooded with less than half that time's rainfall, Reddy said.

"I hope that you will make a beginning by leading efforts for the much-needed widening of the drainage system to avoid flooding in Delhi Airport Terminal 3," he said.

Reddy highlighted Scindia's visit to Hyderabad on Saturday during which the minister "promised support for the expansion of Hyderabad airport besides taking necessary steps to set up six more airports in Telangana".

This is welcome but it will be imperative that any expansion should take design considerations fully factoring in the climate change-induced frequent high-intensity rainfall events, he said.

"However, I strongly feel that there is an urgent need for a flood audit of all the airports in India to identify flood-prone areas in and around airports and take up immediate preventive measures thereafter on top priority," said Reddy, a senior Congress leader based in Hyderabad.

Operations at other major airports like Mumbai, Chennai, Vizag, Kolkata, Leh and others have also been disrupted in the past due to high-intensity rainfall in a short duration, he said.

Vishakapatnam airport was inundated for about 10 days in 2006 and Chennai airport was not operational for several days in 2015, Reddy said.

In his letter, he has also shared excerpts of the NDMA's National Guidelines for Management of Urban Flooding, released during his tenure at the authority in 2010.

"Airports are critical infrastructure... It is, therefore, of utmost importance that these will be made flood-proof by providing efficient drainage for much higher intensity rainfall and using best management practices like provision of holding ponds," Reddy said.

The urban heat island effect has also resulted in an increase in rainfall over urban areas from 50 per cent to 150 per cent. Additionally, the threat of a rise in sea level rise is also looming large on all airports of coastal cities, he said

The Ministry of Housing and Urban Affairs' Urban Drainage Manual of 2019 has recommended that all airports and other critical infrastructure should be designed for a 1-in-100-years return period, he said.