By Exclusive by Josh Robertson, Kate Banville and Dan Oakes 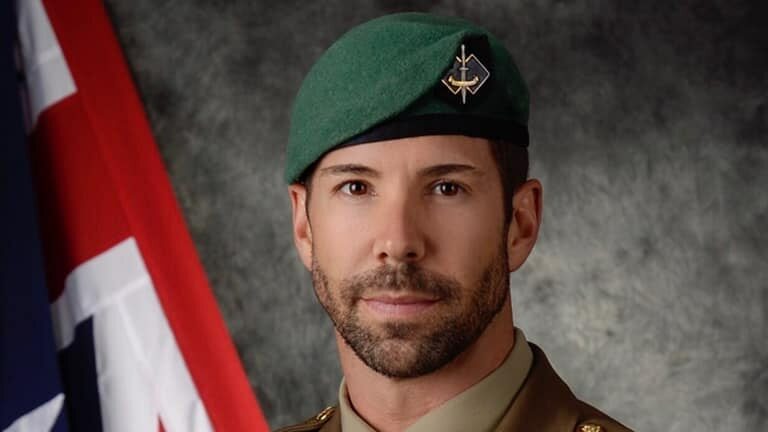 A high-profile former special forces soldier who plans to run for federal parliament is being sued over unpaid charity merchandise he used for unlawful fundraising.

Heston Russell, who shot to prominence as a critic of war crime allegations and the Brereton inquiry, is embroiled in a legal fight involving "veteran supporter pins" he spruiked for Anzac Day.

His company, Voice of a Veteran Pty Ltd, ordered almost 120,000 of the pins, which were promoted on air by Sky News broadcasters Alan Jones and Paul Murray in April.

But an investigation by NSW Fair Trading, acting on complaints, weeks later found Voice of a Veteran was running unauthorised fundraising appeals, an offence that can carry a $5,500 fine.

Mr Russell belatedly sought regulator approval after his company was hit with a compliance notice on April 22 but then scrapped his application before it was assessed.

He has since refused to pay almost $50,000 for the pins, claiming they were "faulty".

On July 23, his supplier Platypus Outdoors Group sued to recover the debt in the Dandenong Magistrates' Court.

Mr Russell told the ABC that he now had more than 1,500 members of his prospective political party, which would allow him to register it with the Australian Electoral Commission.

The former major in the commandos said his journey into public life had gone "like a freight train [and] I wish I made better business decisions".

"I wish I made better decisions than going to a mate for mate's rates as opposed to going through a proper process."

Mr Russell claimed the sale of pins "wasn't a charity appeal [but] to help fund our commercial activities, which is advocating for veterans".

He told Sky Host Paul Murray on air that "we're going to be raising funds in order to look to provide money for a veteran's family who was experiencing financial difficulties and also put over the bar to support some veteran activities on Anzac Day".

Mr Russell said Fair Trading then contacted him and "given we are a company and not a charity, and as a sole director, I was actually not allowed to donate money to [deceased veteran] Ian Turner's mother".

In court documents obtained by the ABC, Platypus says Mr Russell's company had breached a contract agreed in March to buy 119,000 "antique brass lapel pins" for $49,980.

Platypus, a longstanding military supplier, said it delivered all the pins to Mr Russell by April 16.

Mr Russell's company filed a defence to the claim on August 27, alleging it was Platypus that breached the contract.

It alleges the pins were "faulty in that they were embossed with the plaintiff's logo instead of being engraved, which substantially altered the cosmetic front of the pins".

It says Voice of a Veteran, after earlier approving sample pins, advised Platypus of the fault on 26 May and twice "offered to return the supplied pins".

It says Platypus had reneged on its offer to inspect and "replace and remake the supplied pins, which were damaged due to its manufacture".

This meant Voice of a Veteran was forced to give "refunds to customers due to the fault and otherwise was unable to sell the supplied pins".

Platypus Outdoors Group chief executive Ben Doyle-Cox told the ABC that legal negotiations had given Mr Russell the "opportunity to do the right thing as a soldier, an officer, a commando and as a man who should honour his word".

"As the matter is before the courts it would be inappropriate to make further comment at this time, save to say we look forward to resolving this matter," Mr Doyle-Cox said.

Mr Russell has since shut down Voice of a Veteran, which according to its website was "created to have a positive impact on the lives of all veterans [and] has been a platform to help veterans be heard".

In its place, Mr Russell has set up Veteran Support Force, a registered charity with a board with three other directors.

Its constitution says it was "established for the purposes of relieving the suffering and supporting the health and wellbeing of veterans and the veteran community".

This may include support services for veterans engaging with the royal commission into defence and veteran suicides, it says.

Mr Russell has told media outlets his tilt at politics was prompted by what he saw as "attacks" on veterans through the Brereton inquiry and reporting of war crimes allegations against special forces, including against his own platoon.

The damages claim against Mr Russell's company is due back in court on November 25.