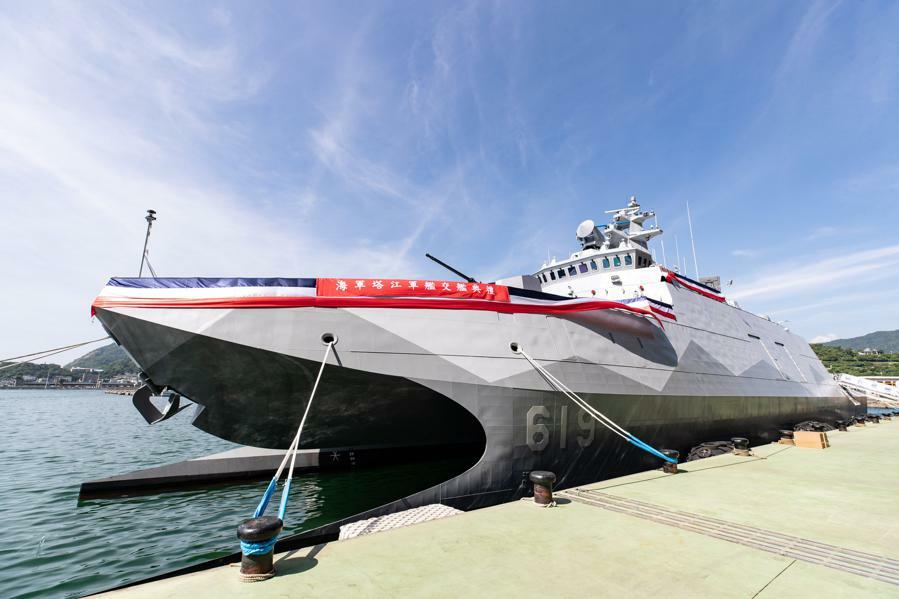 Ta Chiang already had a nickname when she commissioned on Thursday. “Carrier-killer.” In other words, a possible countermeasure to the Chinese navy’s steadily-growing fleet of flattops.

But China’s carriers—two in service, one under construction—might not be the greatest threat to Taiwan’s sovereignty. Unassuming floating causeways arguably pose a greater danger to the island country.

It’s this “lighterage” that Taiwan perhaps should target as it deploys as many as a dozen catamaran warships. Barge-busters rather than carrier-killers.

Ta Chiang improves on the prototype vessel of the class, Tuo Chiang, which launched in 2014. Tuo Chiang proved the type’s basic layout—a 76-millimeter gun on the bow, four angled box launchers for missiles nestled behind the bridge, a close-in defensive gun aft of the launchers. A flight deck on the stern. Forty-one crew. A 45-knot top speed.

Naval planners apparently decided the catamaran wasn’t very useful as a sub-hunter—and also was hurting for air-defenses. On the follow-on Ta Chiang, they omitted the torpedoes and replaced one of the Hsiung Feng III launchers with a 16-round launcher for TC-2N surface-to-air missiles with an approximately 20-mile range.

Each vessel sails with a sensor suite to match its weaponry. Tuo Chiang has sonar. Ta Chiang doesn’t.

Small but heavily armed and inexpensive at just $73 million, Ta Chiang fills an obvious niche at the low end of Taiwan’s surface fleet, which at present is top-heavy with big, expensive American- and French-made destroyers and frigates.

“I believe that with the addition of this warship, the navy’s task of defending the sea and territories will be even more powerful,” Taiwanese president Tsai Ing-wen said.

It’s not however clear that Ta Chiang poses a serious threat to China’s flattops, which usually sail with several escorting frigates, destroyers and cruisers and are, like all aircraft carriers, some of the most heavily-defended vessels in the world.

The Chinese People’s Liberation Army Navy is building up to 16 Type 055 cruisers, each with 112 vertical cells for long-range missiles. It would be surprising if, in wartime, a Chinese carrier deployed without one or two Type 055s in tow.

Taipei plans to build 10 additional catamarans like Ta Chiang. If all 12 catamarans fired all of their ASMs at the same time, that would amount to 148 missiles. A pair of Type 055s could fire an air-defense missile at each incoming Taiwanese munition and still have rounds to spare.

It’s not the catamaran flotilla can’t get lucky and land a blow on a Chinese flattop. But Chinese carrier groups have bigger problems than Taiwanese catamarans. American and Japanese submarines, for one.

That’s because the PLAN so far operates just 11 large amphibious assault ships and 64 tank landing ships—enough amphibious lift to land around 25,000 troops and a few hundred tanks. That’s a fraction of the roughly million men and thousands of vehicles Beijing might need to put ashore to overcome Taiwanese defenses.

China’s thousands of civilian merchant ships, legally absorbed into naval service, would transport the balance of the invasion force. But unless shock troops succeeded in seizing a Taiwanese port without seriously damaging it, these merchantmen would need some way of offloading their passengers and cargo.

That’s where lighterage comes it. It’s a floating dock that the merchant ships themselves can haul in pieces then crane into the water to create a temporary path from ship to near-shore. A semi-submersible barge is the final piece. The off-ramp.

Analysts Michael Dahm and Conor Kennedy detailed China’s lighterage in an exhaustive report for the Center for International Maritime Security.

An early lighterage system first appeared in public in 2012 after extensive development, according to Dahm and Kennedy. “A team of engineers at the PLA’s Military Transportation University worked for over a decade to overcome the engineering challenges associated with the system, especially as they related to connections between the modules and shallow water propulsion,” Dahm and Kennedy wrote.

A newer, heavier-duty lighterage debuted last month. “It is much more substantial and longer than the older floating pier, extending approximately 1,475 feet from the shore,” according to Dahm and Kennedy.

Needless to say, a quarter-of-a-mile-long floating causeway is a major bottleneck. Forget flinging a bunch of catamarans at a heavily-armed carrier group. Aim them where they can do the most good. At the thin, fragile thread connecting China’s invasion fleet to Taiwanese soil.