Forde-Yard Dash: The Coaching Market May Already Be Thinning 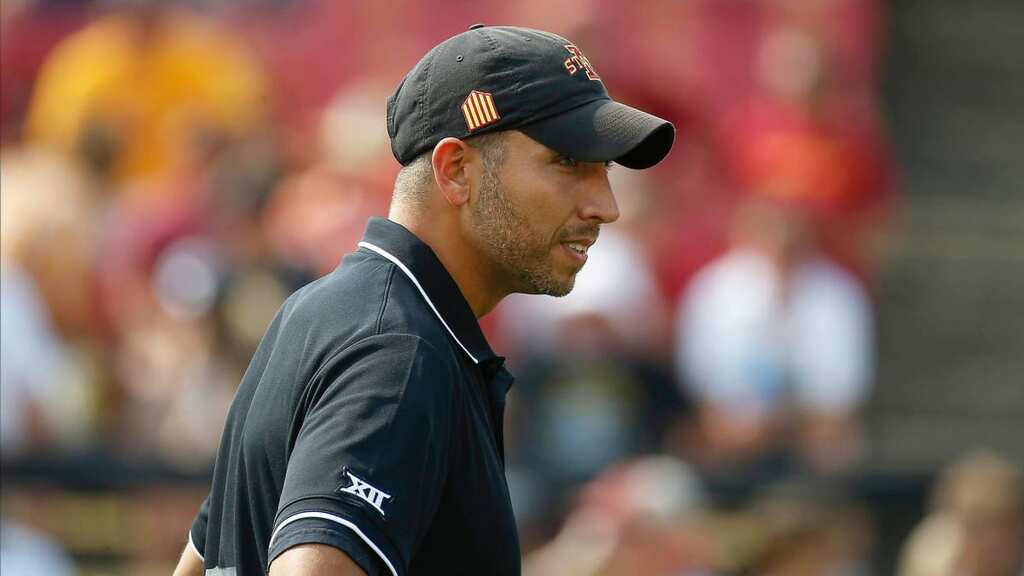 SECOND QUARTER: WHERE HAVE ALL THE HOT JOB CANDIDATES GONE?

When the USC job opened half a lifetime ago (or maybe it was Sept. 13), the candidate list had a look to it that might no longer apply. While James Franklin and Luke Fickell remain viable and attractive—although not necessarily getable—the list below them has changed for the worse from a USC perspective. And now if you factor in an increasingly likely LSU opening, plus the continuing prospect of turnover at Nebraska, it’s fair to wonder who would be worth the megamillions that will be paid for those positions. A Dash roll call:

Matt Campbell (11), Iowa State. His Cyclones began the season in the top 10 and now are unranked after losses to Iowa and Baylor. The wins are all low-impact: FCS Northern Iowa by six, a blowout of winless UNLV and a blowout of hopeless Kansas. Credit Campbell with raising the program to a point of consistent winning, not easy at Iowa State—if he has a fifth straight winning season, it will be the first time the school has done it since the 1920s. But the brass-tacks fact is that the Clones have not risen to meet higher expectations. What was supposed to be the best season in school history might fall well short of that mark. (Not to mention the fact that Campbell doesn’t necessarily translate well to the West Coast or the South, which limits his marketability.)

Tony Elliott (12), Clemson offensive coordinator. Hard to imagine a sharper U-turn for an assistant’s prospects for landing a head-coaching job. In August, Elliott was in demand after years of being extremely choosy about which jobs he might pursue. In October, he’s under fire from Clemson fans for the puny Tigers offense. In Year 1 After Trevor, Clemson is 125th nationally against FBS competition in scoring offense and 123rd in total offense. That’s a tough sell.

P.J. Fleck (13), Minnesota. You lose to Bowling Green—winner of 13 of its last 56 games before waltzing into Minneapolis on Sept. 25—you pay the marketability price. Taking nothing away from the 11–2 season of 2019, but Fleck’s Minnesota record other than that annus mirabilis is 18–19.

Jonathan Smith (14), Oregon State. He was very much the Flavor of the Week after beating USC and Washington in consecutive games and taking the Beavers to the top of the Pac-12 North at 4–1. But let’s remember: USC is terrible, and Washington is dysfunctional on offense, and Smith followed up that twin killing by losing to Washington State. Until Smith has a winning season—he’s 13–24 in his fourth year—it’s a bit premature to put him on the USC wish list.

Also: can we talk about Lane Kiffin (15)? Word has circulated that he could be on LSU’s radar if/when Ed Orgeron completes his stunning post-2019 flameout. But other than drumming up attention, Kiffin’s résumé remains short on substance. If LSU wants to get excited about a guy with a one-point home win over Arkansas and beating up on Louisville in the season opener, The Dash suspects Alabama would be perfectly fine with that.

Jimbo Fisher (16), Texas A&M. Hey, look who’s back. Last week the $90 million man was being (rightly) skewered for an offensive dud of a 3–2 season. This week he’s back to being a hero in College Station—and a person of interest in Baton Rouge—after doing the hardest thing in college football: beating Alabama. If the purple-and-gold school with the Saban Complex wants to pay Fisher $10 million a year to try to beat the Tide, go for it.

Mark Stoops (17), Kentucky. The last coach who started a season 6–0 in Lexington was a Mr. Paul Bryant, in 1950. If Stoops can’t parlay that into a pile of cash or a different job, he’s not trying hard enough. While Stoops may be grazing the ceiling of what he can do at Kentucky, it still might be preferable to trying to resurrect the faded glory of Nebraska. He’s not a fit at USC. Could LSU take an interest?

Sonny Dykes (18), SMU. He’s won 26 of his last 32 at SMU, including all six this season. Dykes is as Texas as frontage roads and lizard-skin boots. He’s tried the West Coast and Pac-12 once, and that won’t happen again. But if LSU opens and gets to a second tier of candidates, Dykes could wiggle his way into the conversation. LSU got a taste of pyrotechnic offense in 2019, and it tasted good. (Granted, a Dykes hire would require athletic director Scott Woodward to go against his own tendencies, which is to hire big names at staggering prices.)

Jamey Chadwell (19), Coastal Carolina. He might not be ready for USC or LSU or Nebraska, but as the dominoes fall somebody has to take a serious run at the guy who has won 17 of his last 18 games. The Chanticleers employ a creative option offense and a banzai blitz defense that is fun to watch. They have been killing teams this season but lack the schedule to gain College Football Playoff traction. Potential added bonus: Would Chadwell take ace quarterback Grayson McCall with him somewhere else?