Forde-Yard Dash: Rivals or Nearby Opponents? 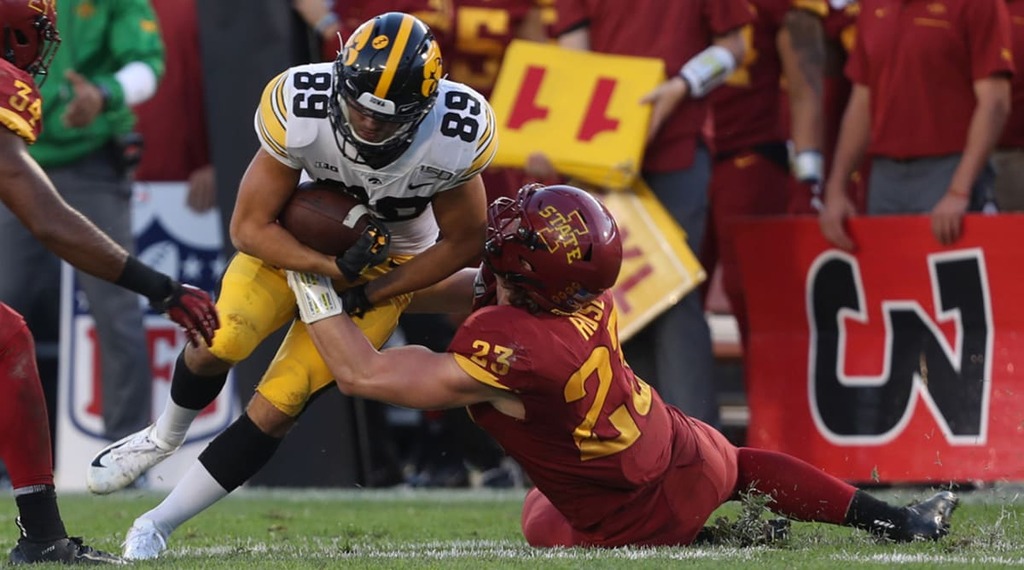 FOURTH QUARTER: IS IT A RIVALRY?

There are several games between teams in close proximity to one another this weekend, but not all nearby opponents are rivals. The Dash looks at seven of them and gives a verdict: rivalry or not a rivalry?

Iowa at Iowa State (31). Is it a rivalry? Oh, yes. Distance between the two schools: 125 miles. How many times have they played: 67, starting in 1894. Who holds the upper hand? Iowa leads the series 45–22, and has won the last five meetings. Does the series have a nickname? Yes. Cy-Hawk. Not the greatest, but that’s what we’ve got. What’s at stake this year? More than ever. Both teams are ranked in the top 10, which has never before been the case at the time of the game. The Cyclones came into the season believing this could be their best team but debuted with a sluggish win over Northern Iowa. The Hawkeyes were optimistic about the season, then raised hopes further by blowing out Indiana in the opener. Who is favored? Iowa State by 4 1/2. Dash pick: Iowa State, 21; Iowa, 16.

Tulsa at Oklahoma State (32). Is it a rivalry? Maybe a one-way rivalry, with some growth potential. Tulsa definitely takes the matchup more personally, but the two have signed a home-and-home deal starting in 2024 that will run for eight years. Distance between the two schools: 73 miles. How many times have they played? 74, starting in 1914. Who holds the upper hand? Oklahoma State leads the series 42-27-5, and has won the last eight meetings. Does the series have a nickname? For sponsorship purposes, this is the Bank of Oklahoma Turnpike Classic. How magical. What’s at stake this year? Tulsa is trying to rebound from a dismal opening loss to FCS UC Davis; Oklahoma State was unimpressive in its own right in beating FCS Missouri State. Who is favored? Cowboys by 13.5. Dash pick: Oklahoma State, 27; Tulsa, 10.

Florida at South Florida (33). Is it a rivalry? In USF’s dreams only. But the fact that this is a USF home game, which starts a two-for-one home-and-home deal, does add at least a teaspoon of juice. Distance between the two schools: 124 miles. How many times have they played? Once, in 2010. Who holds the upper hand? Florida won the only meeting by 24 points, and has all the clout. Does the series have a nickname? There has been no series, so there is no nickname. What’s at stake this year? The Gators are ranked; the Bulls are in the tank and have been for a while now. USF will undoubtedly be jacked up to play but figures to be overmatched. Who is favored? Florida by 28. Dash pick: Florida, 38; South Florida, 13.

Houston at Rice (34). Is it a rivalry? Only for those with Southwest Conference nostalgia, and even that was relatively short-lived. The two schools only overlapped in the league for 20 of its 80-plus seasons. There probably is some alumni rivalry banter in H-Town, but they are drastically different universities. Distance between the two schools: five miles. How many times have they played? 42, starting in 1971. Who holds the upper hand? Houston leads the series 31–11, and has won the last five meetings. Does the series have a nickname? It is occasionally called the Bayou Bucket Classic. What’s at stake this year? The Cougars need a win, having lost handily to Texas Tech in the opener after maneuvering itself into position for membership in the Big 12. Rice played Arkansas tough Saturday as the program continues to improve under Mike Bloomgren. Who is favored? Houston by eight. Dash pick: Rice, 27; Houston, 26.

Texas at Arkansas (35). Is it a rivalry? Once and future. The SWC nostalgia is much stronger here than in Houston-Rice, to be sure. If you’re old enough to remember President Richard Nixon flying in to watch these two teams play a 1–2 showdown in 1969, it’s definitely a rivalry. If you’re old enough to remember Arkansas coach Houston Nutt flashing “Horns Down” during the 2000 Cotton Bowl, it’s probably a rivalry. And if you’re young enough to be around when Texas joins the Southeastern Conference and these two play regularly, it definitely will be a rivalry once again. Distance between the two schools: 531 miles. How many times have they played? 78. Who holds the upper hand? Texas leads the series 56–22, but the Razorbacks won the last meeting in '14 in the Texas Bowl. Does the series have a nickname? No. It’s just football. What’s at stake this year? SEC bragging rights? Eh, maybe not. The Longhorns are trying to extend the solid start to the Steve Sarkisian Era, while the Hogs are looking for a signature win for second-year coach Sam Pittman. Who is favored? Texas by 6 1/2. Dash pick: Texas, 35; Arkansas, 24.

Utah at BYU (36). Is it a rivalry? Assuredly so, every day of the year. Distance between the two schools: 47 miles. How many times have they played? 94, starting in 1922. Who holds the upper hand? Utah leads the series 59-31-4. It wasn’t until the 21st meeting that BYU won. The Utes have won nine straight, which is one reason their fans love Kyle Whittingham. Does the series have a nickname? The Holy War. What’s at stake this year? Both teams got off to 1–0 starts, BYU beating Arizona and Utah beating FCS Weber State. The Cougars are on their way to the Big 12 and would love to follow last year’s 11–1 season with another strong one. They had the better team last year but didn’t get to play the Holy War. The Utes are gunning for an eighth straight winning season and their 16th in the last 18. Who is favored? Utah by seven. Dash pick: BYU, 21; Utah, 19.

Stanford at USC (37). Is it a rivalry? Yes, by California football standards. It might not be USC-UCLA or Cal-Stanford, but there is sufficient enmity. Legendary Trojans coach John McKay allegedly had this to say when his son J.K. and high school quarterback teammate Pat Haden were considering going to Stanford: “If it was between Stanford and Red China, I would pay your way to Peking." Distance between the two schools: 363 miles. How many times have they played: 100. Who holds the upper hand? USC leads the series 63-44-3 and won the last meeting, in 2019. Does the series have a nickname? No. It costs so much to attend both schools that nobody can afford to purchase a trophy for the winner. What’s at stake this time? USC is ranked after beating San Jose State; Stanford is reeling after a dismal opening performance against Kansas State. Since it’s a Pac-12 game, it will impact the standings even though they are in different divisions. Who is favored? USC by 17. Dash pick: USC, 28; Stanford, 14.

COACH WHO EARNED HIS COMP CAR THIS WEEK

Willie Fritz (38), Tulane. Like LSU, the Green Wave was run out of Louisiana by Hurricane Ida. Unlike LSU, the Green Wave showed up and fought their guts against a superior opponent Saturday, battling heavy favorite Oklahoma to the wire before submitting, 40–35. The game was originally supposed to be a Tulane home game but wound up being played in front of a cream-and-crimson crowd in Norman. Tulane fell behind by 23 points at halftime, then came storming back and had the ball in the final two minutes in Oklahoma territory before failing to convert a first down. Incredible effort in the face of great adversity.

COACH WHO SHOULD TAKE THE BUS TO WORK

Ken Niumatalolo (39), Navy. He’s done a lot of fine work over the years at the Naval Academy, but Niumatalolo has somehow forgotten how to start a season. The Midshipmen were obliterated 49–7 by Marshall on Saturday, a year after being trucked 55–3 by BYU in the opener. At least the Cougars turned out to be really good—and maybe Marshall will be this year as well. But this is also the continuation of a staggering finish to the 2020 season, when Navy lost its last five games and scored a total of 13 points in its final three.

When thirsty in the heartland burg of Kansas City, The Dash recommends a visit to Taps On Main (40) downtown. It’s a sampler’s paradise: About 40 beers are on tap at all times, and you’re charged by the ounce. The beer vessels vary in size, so you can sip your way through a smorgasbord of styles and flavors, or go big with a full-sized glass. It’s a great concept, and TVs are plentiful for watching all the football. Check it out and thank The Dash later.