Forde-Yard Dash: How Florida Became the SEC Epicenter of Dysfunction 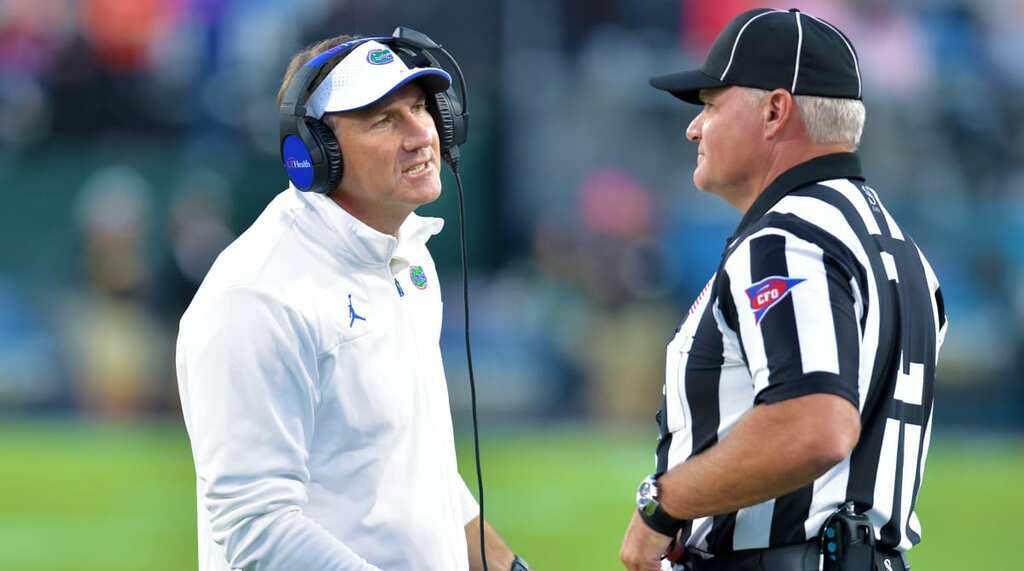 Florida (1) didn’t used to reside in the upper echelon of the Southeastern Conference dysfunction rankings—when you share a league with Auburn, LSU and Tennessee, the chaos cream rises to the top and stays there. But with the firing of Dan Mullen (2) Sunday, the school now has had consecutive football coaches who went from good to gone in the space of just weeks.

In 2017, the Gators were coming off consecutive SEC East titles and had a 3–1 start on the season. Then they lost to LSU and Texas A&M by a combined three points, and third-year coach Jim McElwain (3) came out with a vague reference to “death threats” aimed at the coaches and their families. When Florida administrators attempted to follow up on that with McElwain, his response lacked any specificity and led to a statement from the school that distanced itself from the coach and put him on the clock. With a 22–11 record and East titles in each of his first two seasons, McElwain suddenly was on thin ice.

Then came the Kirb Stomping—Georgia 42, Florida 7, in the Cocktail Party game. The next day, McElwain was gone. He might have been fired by season’s end no matter what happened against Georgia, but that was an accelerant.

Flash forward four years and the situation feels similar. Dan Mullen arrived after Florida flirtations with Chip Kelly and Scott Frost, and quickly looked like one of the better third-choice hires in recent college football history. The Gators went 29–9 his first three seasons and won the SEC East last year, giving Alabama its toughest test on the way to the national championship.

That carried over to a close loss to Alabama in September with a rebuilding team. After pasting Tennessee, Florida was 3–1 and everyone seemed pretty happy—much like McElwain’s 3–1 start in 2017. Then the Mullen Era went from solid to spiraling: an upset loss to Kentucky; a perfunctory beating of Vanderbilt; and an upset loss to an LSU team that had been in disarray.

At 4–3, the grumbling was increasing but Mullen’s job still seemed secure. Then he got his own Kirb Stomping: Georgia 34, Florida 7. The talent disparity was glaring. After that, Mullen kept adding fuel to his own fire—he blew off recruiting questions, he shut down media access, he took a listless team to South Carolina for an embarrassing beatdown, a firing of defensive coordinator Todd Grantham that led to a complete defensive meltdown against FCS Samford, which Mullen then tried to spin as a “great win.” His tenure was collapsing like a shanty in a hurricane.

Missouri provided the final gust of wind Saturday, winning 24–23 in a game marked by Eli Drinkwitz’s boldness and Mullen’s reticence. The end result was Florida’s first two-win season in the SEC since 1986, and at 2–6 it was the school’s worst winning percentage in the league since 1979.

Drinkwitz then trolled Mullen in the postgame press conference, pulling his hood over his head and brandishing a light saber while saying, “May The Force be with you.” That was a callback to the 2020 Halloween game between the teams, when Mullen made a postgame appearance in a Darth Vader outfit—flaunting his villain vibe that came after stupidly calling for fans to “pack The Swamp” during the depths of the pandemic.

While these two Florida-Missouri games have provided some good theater—and perhaps finally given Missouri a semblance of an SEC rival—Mullen’s role choice proved prophetic. Darth Vader and his Death Star looked all-powerful for a time, then met their demise.

None of the last three Florida head coaches—Will Muschamp, McElwain and Mullen—made it to 50 games on the job. That’s something no other SEC school currently can say. Surprisingly, Gainesville has become the conference capital of turnover, turbulence and dysfunction.

WHO IS NEXT AT FLORIDA?

Despite that status, this should be a Cadillac job when up and running properly. And there are reasons to expect that status to return, with Florida set to open an opulent new facility that should enhance the much-discussed recruiting shortfalls. A quick look at the potential candidates, and the problems that exist with each of them:

Billy Napier (4), Louisiana. There is building buzz around the 42-year-old coach of the Ragin’ Cajuns—and given the number of high-level openings, the premise that it’s too big a leap from the Sun Belt to the Power 5 is losing validity. Somebody has to take these jobs, right? Why not a guy with a 38–12 record, three straight 10-win seasons and SEC experience as an assistant to Nick Saban from 2013-16? Napier helped Alabama land some of its biggest stars of the last decade, and is thought of highly enough in the Saban camp that they might not love the idea of having him in the same conference. The drawback: Aside from the jump in class from the Sun Belt, Napier does come with close ties to McElwain.

Lane Kiffin (5), Mississippi. There is a faction of Florida boosters eager to ride the Lane Train. He’s taken the Rebels to a 9–2 record in his second season, with a fan-friendly offense and a willingness to go after the big dogs in the league. Kiffin also is every bit the recruiter Mullen is not, putting a premium on chasing the best talent he can get. The drawback: Kiffin and athletic director Scott Stricklin are an oil-and-water mix, and if Stricklin is not beholden to booster pressure this would seem to be a tough sell. Florida’s last two head coaches have been high-maintenance guys with a propensity to say something cringe-worthy—does the school really want a third straight like that?

James Franklin (6), Penn State. He’s won at a much tougher place in the SEC than Florida, and then followed that up with a successful tenure at Penn State (although this year has been a bit of a letdown). Florida also has never had a Black full-time head football coach. The drawback: Would he leave, and would Florida be his first option if he does? Franklin’s clock might be ticking at Penn State, but he’s dropped hints that a new commitment to the school may be forthcoming. All eyes are on a meeting of the Penn State compensation committee scheduled for Tuesday.

Dave Clawson (7), Wake Forest. Much like Franklin’s success at Vanderbilt, what Clawson has done at a place like Wake should make winning at Florida look easy. He also is on the cutting edge of offensive football, which plays well at a school that once won national titles with the innovating attacks of Steve Spurrier and Urban Meyer. His personality, demeanor and outlook would mesh well with Stricklin’s. The drawback: Is Clawson the guy to beat Kirby Smart and Nick Saban for top recruits? That’s never been his game.

Bob Stoops (8), TV analyst. Before he became a national championship coach at Oklahoma, Stoops was the very popular defensive coordinator for Spurrier during some of the Florida glory days. Stoops enjoyed his time at the school and could rocket to the top of this list if he has interest in getting back into coaching. The drawback: Does he have interest in getting back into coaching? Stoops has had plenty of opportunities in the past few years and thus far rebuffed them all.