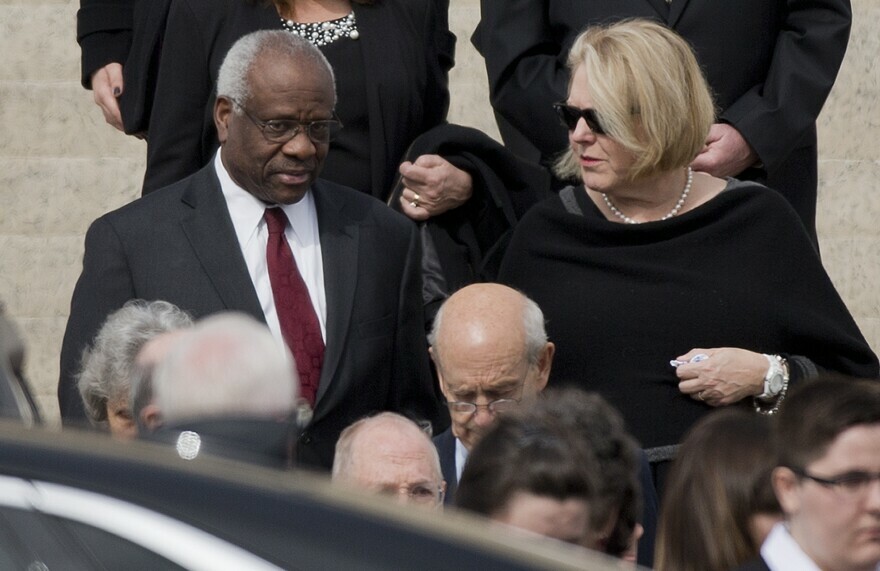 Senate passes bill to give police protection to families of Supreme Court justices
The bill follows a leak last week of a draft Supreme Court opinion that, if unchanged, would overturn Roe v.…

‘We are becoming addicted to wanting particular outcomes, not living with the outcomes we don’t like,’ Justice Thomas said

For Supreme Court justices, secrecy is part of the job

Supreme Court Justice Hugo Black was hospitalized, his health failing, when he gave his son Hugo Jr. an order: Burn the papers. Worried that the publication of certain of his private notes could harm the court or his colleagues, he insisted on their destruction.

“Operation Frustrate-the-Historians,” his wife called it. As for the reporters asking the hospital about his condition: “Tell them nothing,” Black told his son.

Black, who served on the court from 1937 until just before his death in 1971, isn't alone among the Supreme Court's justices in what can seem like a sometimes extreme desire for secrecy.

Supreme Court justices have long prized confidentiality. It's one of the reasons the leak of a draft opinion in a major abortion case last week was so shocking. But it's not just the justices' work on opinions that they understandably like to keep under wraps. The justices are also ultimately the gatekeepers to information about their travel, speaking engagements and health issues as well as the decision-makers about whether and when to make their private papers public.

Even details about the Supreme Court Building itself can be hard to come by. Before the coronavirus hit, the taxpayer-funded structure was used 30 to 50 times a year for after-hours private events by groups that pay for the privilege, but the court declined to provide a comprehensive list of groups or events. A few years ago, when the iconic red drapes that frame the courtroom were replaced, the court declined to even name the company that did the work. The court is also not subject to the federal Freedom of Information Act.

The justices themselves have pushed back against suggestions they are less than transparent. Responding to a question in 2018 about whether the court should allow cameras to televise their proceedings as Congress does, Chief Justice John Roberts had a simple answer: No. He went on to defend the court's practices.

“It's not as if we're doing this in secret. We're the most transparent branch in government in terms of seeing us do our work and us explaining what we're doing,” Roberts said. When the court decides something, the justices generally spell out their reasoning in lengthy opinions. A court spokesman even once favorably compared the court's openness to a “goldfish bowl."

But Gabe Roth, executive director of the court transparency group Fix the Court, said calling the court the most transparent branch is just wrong. “That’s a laughable statement, and Chief Justice Roberts knows it," Roth said in an email, calling some of the court's practices “galling."

Even the justices' decisions aren't always thoroughly explained. When cases come to the court on an emergency basis and in need of a quick resolution, an answer from the justices often comes without any or much accompanying reasoning. Justice Samuel Alito last year defended what's been called the court's “shadow docket,” saying it is hard to see how the court might handle things any other way.

The coronavirus pandemic has pushed the court to be more open in one way. Before the pandemic, a member of the public who wanted to hear an argument live had to stand in line outside the court for hours and sometimes days, or pay someone else to wait, to get one of the seats reserved for the public. But when the court began holding arguments by telephone because of the pandemic, it began making audio available live.

If the court's proceedings are more public, the justices themselves still like their privacy. While modern presidents have traditionally released the results of an annual physical, justices make their own decisions about releasing health information.

Some are more forthcoming than others. Justice Ruth Bader Ginsburg released quite a bit of health information through several bouts with cancer. She nonetheless waited four months in 2020 to note that her cancer had returned. That year, Roberts spent a night in a hospital after falling and needing stitches. His injury wasn’t disclosed until the next month, and then only because The Washington Post learned of it.

Until last week's leak, one of the biggest court mysteries of the year involved the hospitalization of Justice Clarence Thomas. The court announced in late March, days after he was admitted, that Thomas had been hospitalized after experiencing “flu-like symptoms,” and he was diagnosed with an infection. The court ruled out COVID-19 but didn't release any more details about Thomas' illness or why he was hospitalized nearly a week, days longer than expected. Had the justices not been about to hear arguments after Thomas was hospitalized, making his absence obvious, it's unclear anything ever would have been released.

As for when the justices agree to speak to groups, it's typically left to the group to publicize the event. Last week, for example, as is typical, the court did not publicize the fact that Roberts and Thomas were speaking in Atlanta. Sometimes events are livestreamed or recorded, sometimes not. Sometimes the public is invited, sometimes reporters are not.

The justices' practice is similar to Congress, where schedules for senators and representatives are not open to the public or obtainable through most routine records requests. The president, by contrast, releases a daily public calendar, and his private calendar is recorded for history. Who visits a justice at the court is not public, either, unless the visitor makes it public.

When it comes to the justices' papers, the records that are created as they decide what cases to take up, draft opinions and communicate with their colleagues are considered the justices' property to do with as they wish. Justice Thurgood Marshall's papers were made public on his death. But retired Justice David Souter donated his papers to the New Hampshire Historical Society with the promise they won't be made public until 50 years after he dies.

Perhaps channeling Justice Black, Souter reportedly told the society's executive director: "I’ve got an incinerator outside my house, and either you agree to 50 years after my death, or they go into the incinerator."

Senate passes bill to give police protection to families of Supreme Court justices
The bill follows a leak last week of a draft Supreme Court opinion that, if unchanged, would overturn Roe v.…

‘We are becoming addicted to wanting particular outcomes, not living with the outcomes we don’t like,’ Justice Thomas said