For a capable, clean and safe commute 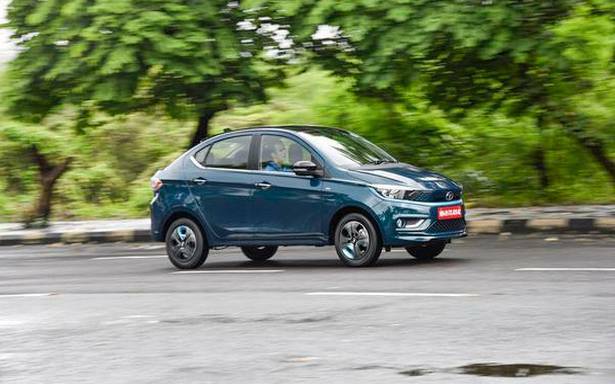 The Tigor has had an all-electric derivative for some time now. Showcased back at the 2018 Auto Expo, the sedan initially had a range of up to 142km with an update adding a larger battery pack and extending the figure to 213km.

Now, the Tigor EV has been given a facelift with a notable update under the hood for private buyers. The commercial model, now branded the Xpress-T, carries forward the old 72V electrical system while the Tigor EV for private buyers — the one we are testing here, gets Tata’s Ziptron EV system replete with a more powerful motor, larger battery and more range.

There is also the price factor. While not exactly cheap, at ₹11.99 lakh, the Tigor EV is the most affordable private EV in India and we look at its biggest change — the Ziptron powertrain.

With the bigger battery, Tata claims an ARAI-certified range of 306km though our initial drive around Mumbai would put actual figures in the region of around 180 to 200km. This is not enough for far-off weekend destinations but is sufficient for city use. Do remember that if you dip below 25% on the battery, system power is reduced to help range.

Behind the wheel, the new EV does feel like a proper electric car when compared to the older Tigor EV. Performance is better but not electrifying like we have come to expect from bigger and more expensive EVs. That initial kick from an electric motor’s instant torque is missing and acceleration is flat and very sedate. Put your foot down and you get the feeling that the car’s system is carefully metering out its energy. The normal Drive mode is good only if you are ambling in traffic, with Sport mode making full use of the 75hp, 170Nm motor for peppier acceleration if you want to hurry along or even overtake.

Tata says it has tuned the system to deliver a measured rate of acceleration — keeping in mind that the car will mainly be used in the city — and also, naturally, to preserve charge. In our initial testing, we clocked a time of 14.88sec for the 0-100kph dash in Sport mode and an excruciatingly slow 29.28sec in Drive.

Brake energy recuperation is available, but it is not strong like in other EVs, and retardation on throttle lift-off feels similar to regular ICE cars. The regen level is also not adjustable and the mild intensity is essentially due to the smaller sized motor that has a limited capacity for regeneration.

The brakes feel mushy, are quite uncommunicative, and get grabby when you press down. Braking performance is fine, though stopping distance is expected to be longer than the regular Tigor due to the EV’s extra weight. The steering, on the other hand, is nicely set up. It is communicative, light and easy in the city, while still being firm and reassuring at higher speeds. Ruts and bumps do not throw it off course.

Another highlight is the ride quality — it is very good and absorbs most potholes and ruts with ease. It does thump through larger ones but does not feel unsettled, and the ride on the whole is nice and comfortable. What is also nice is that this does not come at the expense of handling. As we have come to expect of EVs, cornering is quite flat, with minimal body roll owing to the low centre of gravity.

Grip from the 175-section tyres is also good and more than enough for what most owners will subject this car to, though tyre noise at speed is on the higher side.

Tata has to be commended for retaining the Tigor’s 4-star Global NCAP crash rating with the EV too. In case of a crash, the additional mass increases the load on the body shell, so Tata has re-engineered a few body points, and provided additional strengthening to manage the extra 200kg, which should also be considered when thinking of its pricing.

The cabin is largely similar to the regular car, with one difference being the large drive selector knob in place of the gear lever. While the rotary action is easy-to-use, you cannot go directly from Reverse to Drive or vice versa, you need to pass neutral, wait for the engagement beep, and only then shift ahead. This takes a second or two but is annoying when you are executing a quick three-point turn. Going from Drive to Sport mode, however, is quick.

The instrument panel is also different, with the dials replaced by an all-digital display. It has the usual lights and a digital speed readout, and while advanced EV-related info like battery graphs are absent, you get a range readout, a regen level indicator, battery gauge and percentage and a battery consumption readout.

Also unique are the electric blue accents that are tastefully done around the instrument panel, AC vents and on the seat fabric. The plastics and overall quality do not reflect what you get in a ₹10 lakh-plus car but that is typically an EV today, where they all offer less than comparable ICE cars. On its own though, the Tigor EV is decent enough and it has good equipment in the form of a 7-inch touchscreen with Android Auto and Apple CarPlay, an auto AC, reverse camera, connected car tech and a superb-sounding Harman audio system.

The seats are large and comfy, though cushioning is soft. Space all round is good and will be sufficient for most, with enough head and legroom. Where the EV differs noticeably is in the boot. With the battery pack located below the spare wheel now sitting inside the boot, space is down from 419 litres to 316 litres. That said, the spare tyre is neatly mounted to one side and the available space is quite useable. The ground clearance has not reduced either and, at 172mm, the EV is 2mm higher than the standard Tigor.

As for the exterior, the EV is similar to the regular car and is nice and sharp looking. The grille is replaced by a flat panel with small cooling slots below, with neat, embossed tri-arrows. There are different rims as well, which, along with other areas like the grille and bumpers, carry the electric blue accents and show its EV credentials.

Summing up the Tigor EV is quite the task. To begin with, it is electric and hence, expensive. Even with healthy subsidies, like you get in Delhi, it is still well over ₹ 3 lakh more than its petrol-AMT counterpart. By our calculations, you will need about four years to recover the difference if your running is about 1,000km per month, which is about 45km per day in a five-day week.

Then there is Tata’s own Nexon EV. At just ₹ 1 lakh more for the base and ₹ 2 lakh more for a similarly equipped variant, the Nexon will attract some Tigor EV intenders with its bigger size, more power and the allure and benefits of an SUV.

The Tigor is not, however, without its strengths or reason. For those with a higher running and who can avail of bigger subsidies, it makes a case for itself. The change in powertrain certainly makes this the best version of the Tigor; it retains nice bits such as the space, ride and safety, and swaps out the lacklustre engine for a smoother and cleaner unit. Yes, the acceleration is slow, but the Tigor EV is designed to be an easy-to-drive city commuter and it does that well.

The compact dimensions are great in the city, the steering is nice and light, it is decently equipped, and the performance is silent and smooth. Its range is also sufficient for daily city life. In fact, we would not be surprised if it pips the Nexon EV in our tests. So, it is capable, clean and safe; a car with good and noble intentions, just like the customers who would buy it.

Buying a Tigor EV – The numbers

Est. insurance varies based on provider

Tax collected at source for cars over ₹10L

Subsidy to be availed from the Delhi Govt.

Price in Delhi as on September 21; electricity per unit cost varies based on consumption