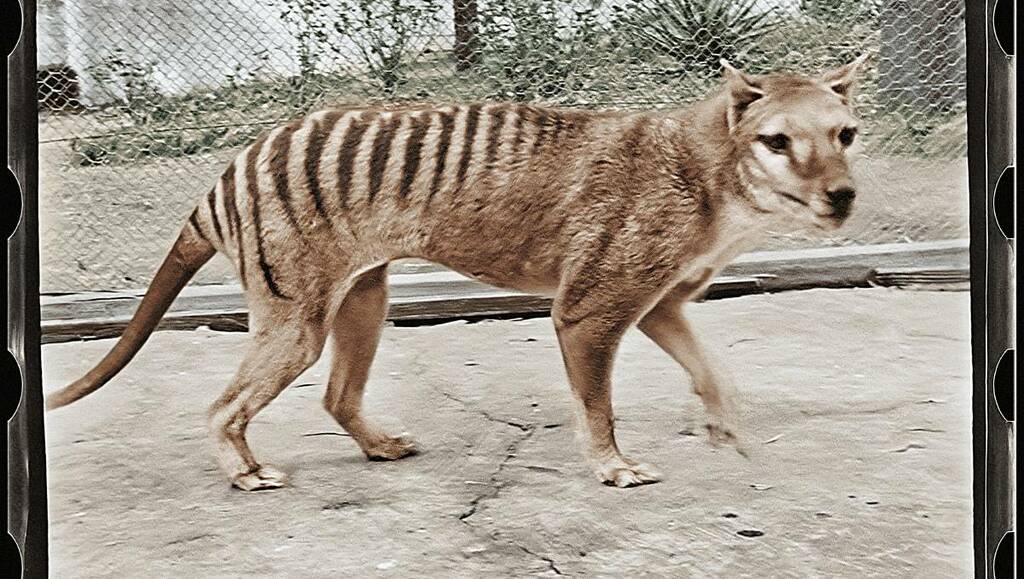 It's one of the most well-known pieces of footage of the last known surviving Tasmanian tiger - or thylacine - and it's now in full colour.

The National Film and Sound Archive released the colourised footage on Tuesday for National Threatened Species Day. The day commemorates the death of the last thylacine and raises awareness of other plants and animals at risk of extinction.

Filmed in 1933 by Australian zoologist and naturalist David Fleay, the footage - the longest known surviving film of the extinct marsupial - contains some of the most widely seen moving images of Benjamin the Tasmanian tiger, who died in captivity three years later, in 1936.

"Benjamin lived out his days in Beaumaris Zoo, which is located in Hobart and this black and white footage is quite well known as being part of a very small cache of footage of the thylacine," National Film and Sound Archive curator Vick Gwyn said.

"It shows Benjamin in this very austere, very cold and impersonal enclosure with a concrete slab and chicken wire enclosing it. It shows him pacing around, doing a bit of a scratch, and doing one of the thylacine's renowned threat yawns where they open up their jaws really wide just showcasing the power of the jaws.

"And it's just a wonderful opportunity that this digitised, historic black and white footage is being reimagined and brought into today with this depth of colour. It almost a reimagining of what it would be like if the thylacine survived today."

From there, the Composite Films team researched the thylacine's colours, before using cutting-edge technology for the colourisation process. Colourings were informed by drawings, sketches, and paintings, as well as pelts preserved in various museums, and written descriptions of the thylacine's coat.

"I have worked on more than 100 archive-based documentary films and series, most of them very complex. But for the thylacine, I faced a different kind of challenge and responsibility: I had to take care of the rare footage, and pay tribute to the last representative of a species, which disappeared 85 years ago," Mr Franois-Steininger said.

Fewer than a dozen source films of the Tasmanian tiger, amounting to little more than three minutes of silent, black-and-white footage, are known to survive. There is presently no other known surviving footage of the thylacine on colour film stock.

"David Fleay had this call to try and save the thylacine from extinction, and it's particularly poignant today, being National Threatened Species Day and the anniversary of Benjamin's death on September 7, 1936," Ms Gwyn said.

"We're marking this day to commemorate that big loss of this wonderful, very unique creature, in the hopes that it doesn't happen again to other animals and other species.

"I think this footage, whether it's black or white, and whether it's colourised, is just a real testimony to David Flay, and also to being able to share this wonderful digitised footage."