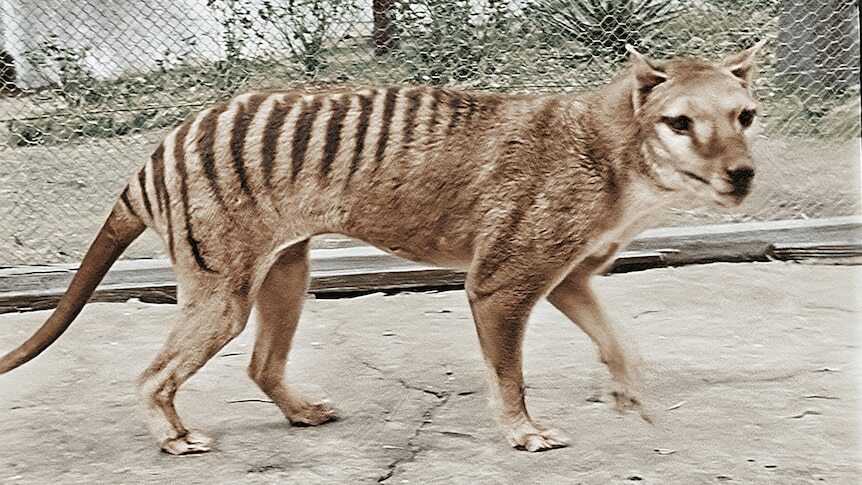 The original footage of the animal was shot by Australian zoologist David Fleay in 1933 on black-and-white film but has now been colourised overseas and released today by the National Film and Sound Archive of Australia (NFSA).

The film shows Benjamin – the last-known Tasmanian thylacine – walking around an enclosure at Hobart's Beaumaris Zoo, before the animal died 85 years ago today and the species declared extinct.

The footage was released by the NFSA to coincide with National Threatened Species Day, which raises awareness of other animals and plants at risk of extinction.

The 'painstaking process' of colourisation

The NFSA said that fewer than 12 original films of the Tasmanian tiger exist, amounting to about three minutes of silent, black-and-white footage.

"By using a lot of secondary and primary records, and looking at amazing 3D renders of this creature, the team can employ that historic sleuth work and re-imagine the colour."

One of the colourisation experts that worked on the footage, Samuel François-Steininger, said a lack of archived footage of the species meant experts relied on written descriptions of the tiger's coat.

"I have worked on more than 100 archive-based documentary films and series, most of them very complex.

"For the thylacine, I faced a different kind of challenge and responsibility: I had to take care of the rare footage, and pay tribute to the last representative of a species, which disappeared 85 years ago."

Thylacine were the largest carnivorous marsupial before their extinction, with a population estimated to be about 5,000 at the time of European settlement.

Several theories have been put forward as to what caused the species to die out, including a boom in dingo populations and rising sea levels.

Although the popular species has been classified as extinct for almost a century, some people have tried unsuccessfully to prove Tasmanian tigers still exist.

Ms Gwyn said today's footage highlighted how rare the thylacine was before it disappeared.

"I think most people will be very familiar with footage of this amazing creature pacing around what looks like a very austere concrete slab enclosure in Hobart," Ms Gwyn said.

"Their jaw alone shows that this was a really rare species at the time and it is sad it is now extinct."