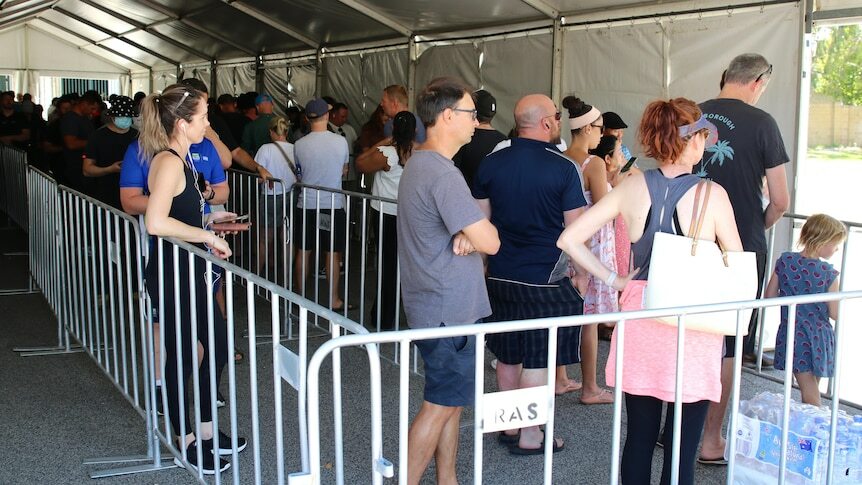 Phones have been ringing off the hook with people trying to make COVID-19 vaccine bookings at GP clinics in every part of Perth.

It comes as Western Australia recorded one new COVID-19 infection, in a child who was a household contact of a previously announced positive case.

On Thursday, Premier Mark McGowan announced WA would roll out the strictest rules for the unvaccinated in the country from January 31.

Proof of being double vaccinated will be required for all hospitality venues, gyms, large events, bottle shops, and for visitors to hospitals and aged care.

The ABC has spoken with several GP clinics in every corner of the city and heard the same story from each of them about them being inundated with booking requests.

In Perth's south, one GP clinic receptionist said the phone had not stopped ringing for weeks and following the announcement, there was a flood of bookings for first doses.

"It has been totally crazy, people are frantic," reported another receptionist closer to the city.

In the Swan Valley, one clinic reported being fully booked out for vaccines until mid-February, and at one clinic in the northern suburbs that had blown out to March.

At a smaller GP practice in the western suburbs the manager was this afternoon running job interviews to hire another receptionist to keep up.

At some larger state-run vaccination clinics, people reported waiting in queues for up to three hours this morning.

The Claremont clinic was required to turn away walk-ins with so many people having made bookings.

Views mixed on the streets of Perth

Perth resident, May Kenyon, said she supported the new rules, but she was worried she might have trouble proving her vaccination status at venues.

"I don't have a smart phone, so I have a problem with how I am going to prove that I have been vaccinated. I don't know how to do that," she said.

"The doctor gave me a printout, but I am still yet to have my booster, so I don't know what to do about that."

"But I agree with it, and those who don't want to be done, well, that is their prerogative."

Pilbara man Gus Parker said he had been vaccinated in order to keep his job, but he was staunchly against government mandates.

"There is a lot of people up there that have left their jobs, mainly through major mining companies, because they do not believe in mandatory vaccination," he said.

"I think it is morally wrong," he said.

"I think to segregate people because of a mandate is just not right. I think if they continue with it people are going to get pretty annoyed."

"I think it is really good because it ensures that people are vaccinated, which would help protect the community, which is what we need," she said.

Hospitality industry preparing to turn some people away

Australian Hotels Association WA CEO Bradley Woods said he did not anticipate hospitality businesses would suffer much from any drop in patronage due to the mandate.

"Given that over 92 per cent of the adult population of Western Australia has already been vaccinated, we don't believe it will have too much of an impact," Mr Woods said.

"But certainly, there are that small minority of the population who aren't double [vaccinated] and they are in a position where they won't be able to patronise those businesses announced."

Mr Woods said businesses would have to be prepared to turn people away.

"Businesses across the board will have to work with their staff to implement appropriate communication with customers and guests around how to deal with those who don't want to be vaccinated," he said.

"In the hospitality industry we're not there to pass any judgement or to mandate a vaccination, but we do have to comply with emergency management orders."

Perth couple, Tyson and Sally, who run a gym in the city, said they were upset by the new rules but not because of any loss of income.

"We're really quite saddened by the segregation and the discrimination that we're forced to take part in from this mandate that's happening right now," Sally said.

"Yes, it's going to be difficult for our business but that's our difficulty, to the general public we have been creating an area of inclusivity, we've been creating beautiful communities in our gyms.

"We've welcomed everybody up until now, and we wanted to keep welcoming everyone and we're suddenly in a place where we can't do that."

Tyson said the requirement at gyms would hit hard because some fitness-focused people were particularly wary of vaccinations.

"They are so strict on every part of their lives, so I think we have a higher percentage of people who aren't [vaccinated]."

"One of our clubs has been around for 11 years and a lot of our members have been with us that time and they are actually family."

One new case of COVID-19 has been recorded in WA, in a child who was a household contact of a previously announced positive case.

The child had been in quarantine throughout their infectious period so there was no community concern.

WA Health has also solved a mystery case announced on Wednesday, tracing that woman's infection to a previously announced case of a traveller returned from Tasmania.

"This was a result of comprehensive tracing by WA Health officials and is the reason WA Health is issuing new public health advice for exposure sites in Perth's south," WA Health spokesperson said.

Genomic sequencing has also confirmed the woman's infection was with the Omicron variant of coronavirus and the transmission was believed to have occurred through 'fleeting' contact.

Many of those sites come with the direction that people who were there must get tested immediately and isolate until they receive a negative result.

Anyone in the broader Perth metropolitan area experiencing symptoms is also now advised to get tested and isolate until they receive a negative result.

WA continues to go it alone on 'close contact' definition

Western Australia's shadow treasurer, Steve Thomas, said the opposition agreed with the Premier that vaccination was important, and that he saw the new proof-of-vaccination rules as an inevitability.

However, he called for urgent clarity on how exposure sites and close contacts would be handled in the state so businesses could prepare.

"The reality is business needs months, it's not good enough for business to be told at the last minute, 'This is how you are expected to cope with COVID'," Mr Thomas said.

"Three weeks is not sufficient notice, and we should have had a road map in place months ago."

The announcement comes after the nation's leaders, except Mark McGowan, agreed at national cabinet on further relaxing the definition of a close contact.

In most jurisdictions outside of Western Australia, the definition of a close contact had already changed to be just someone who was a household contact of a COVID-19-positive person.

The concept of public exposure sites was done away with, as were casual contacts.

Outside of Western Australia, the isolation period for a close contact has also been reduced from 14 days to seven.

On Thursday, most states and territories agreed that close contacts working in key industries would not have to isolate at all and could return to work, if they were double-vaccinated and tested negative for the virus.

However, Western Australia is yet to adopt the national definition, and exposure sites remain, as does the 14-day quarantine requirement for close contacts.

The Premier has conceded that, when the border reopens, the state's definition of a close contact and the related isolation requirements would be more closely aligned to the national definition.

"You've got to reduce the spread of the virus, but you also have to make sure that hospitals and schools, transport, logistics, service stations and power stations continue to function."

Mr McGowan said that, by February 5, the rules for COVID contacts would "largely reflect" what the rules are in the eastern states.

Nurses' union call to be kept in the loop

Australian Nursing Federation state secretary Mark Olson said health workers were concerned that three weeks out from the border reopening, they had heard nothing about any plans for dealing with large COVID-19 outbreaks.

He said there were several lessons that could be taken from the experience of other states, which could be implemented immediately.

These included providing free RAT tests for health workers, prioritising vaccination for the children of essential workers and putting student nurses on standby to assist with various duties.

Mr Olson said WA Health should prepare to ban visitors from hospitals altogether and start preparing lists of who might be exempt from that ban.

"You don't put those plans together in the middle of the panic of the surge, these should be clearly articulated to the public now."

Mr Olson also called on the state government to make public any modelling it had on how the health system might cope based on the Omicron variant.

A WA government spokeswoman said WA's transition plan would be finalised in the lead up to February 5 when more was known about Omicron and up-to-date health advice was available.

"The finer details are still being worked through but [it is] safe to assume frontline health workers will have access to RATs if that's what is required," she said.

WA Police is also preparing to be under the pump once the border opens and have cancelled any holidays booked by senior officers and staff in the coming months.

"In the face of re-opening our state borders on 5 February this year, the leave arrangements of senior officers and staff of the Western Australia Police Force have been cancelled for the months of February and March 2022, to maximise our operational leadership," a police spokesman said.

"Further changes to our business practices may be required to meet policing requirements due to the impact of COVID 19."