Five zebras are running wild after escaping from Maryland farm 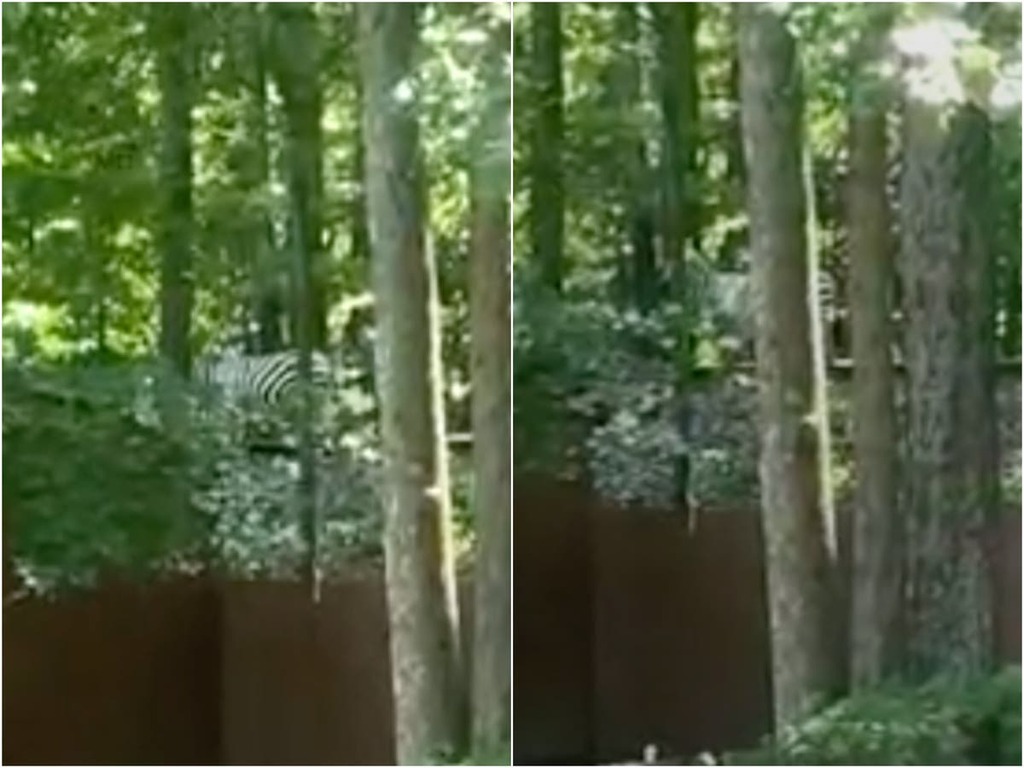 Five zebras are running wild after escaping from a farm in Maryland.

The animals escaped from a private farm over a week ago, animal services officials in Prince George’s County said on Wednesday.

They added that the owner of the zebras, who has not been identified, has been trying to coax the striped animals into a corral area using grain but has so far been unsuccessful.

Officials also said that they have received up to five calls from residents reporting sightings of the zebras, The Washington Post reported.

The five animals appear to have split up into a trio and a pair.

“They got out, and they’re now still running loose,” Prince George county animal services chief Rodney Taylor said on Wednesday, according to The Post. “We have not caught them yet.”

Mr Taylor added that zebras can’t be chased but instead have to be lured, corralled and then fenced in to be recaptured and transported back to the farm. He said it could take up to a week for the animals to be caught.

The escape has prompted some residents to ponder the legality of keeping zebras in the state of Maryland.

Mr Taylor said that they are legal in the area if you have permits from the Department of Agriculture. He said the farm has 39 zebras on the property and that it has the permits required to house them there.

He said residents who spot the animals should not try to catch them, but that they should instead call animal services.

“Never approach them, and don’t try to pet them,” Mr Taylor told The Post. “They’re not going to chase you down. But they are zebras, so they’re not handled by people a lot, so to defend themselves they could bite.”

According to the official, the zebras escaped on 31 August. The owner was unable to locate the animals and a homeowner soon reported having seen the zebras in the woods.

“I was like, ‘I’m not sure about that,’” Mr Taylor said, expressing his surprise at the initial call. But then he recalled that a farm in the east Maryland area had zebras on their property and he sent out a search crew who were unable to find the animals. The farm didn’t appear to have any damaged fencing and it remains unclear how the zebras escaped.

The owner is hoping to catch the zebras in an area where he has put up cameras and placed grain to lure them in, adding some fencing each day. But it could be tricky as zebras tend to get frightened quickly.

By following the animals on video, Mr Taylor said the owner plans to recapture them when they are most likely to come and eat.

Mr Taylor said they have been seen on video in the area between 2am and 4am over the past few days.

“If you build a corral area all at once, they’re very sensitive, and they won’t come there to eat. So you have to put up a few panels at a time,” Mr Taylor said.

Resident Paul Curling told The Post that his 10-year-old daughter Layla spotted the zebras on 2 September.

After thinking they were deer, Layla told her mother: “You’re not going to believe what I’m about to tell you. There are zebras on the railroad tracks.”

“Layla, are you crazy? How would there be zebras out there?” Mr Curling recalled his wife Alexis saying.

“I’m telling you I haven’t been drinking, and I haven’t been doing any drugs. There are zebras in my backyard,” she told an operator of the area’s non-emergency phone system after a moment of silence at the news that zebras were loose in Maryland.

“When she told me I thought: ‘I’m not coming home. It’s probably just deer,’” Mr Curling said about the phone call he received at work from his family.

“We had no idea that anybody around here would own zebras,” he told The Post.

Mr Taylor said it’s the first time in his 39 years at animal services that he has heard of escaped zebras.