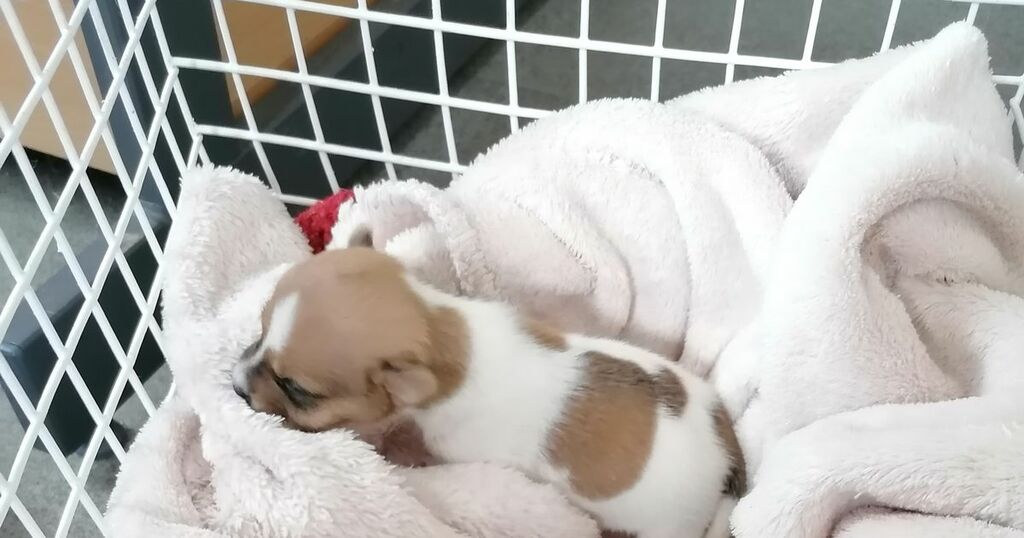 A litter of puppies weighing just 120 grams each have been found abandoned in a village in Wales.

Discovery of a cardboard box hidden in a hedge in Pentre, near Wrexham, was made last week, containing the five dogs so young their eyes were still closed..

The pups were believed to be around one week old.

It is unclear how long they were in the box before being found but flies had started to lay eggs inside.

The kind-hearted stranger who found them took the three males and two females to Rhyd Broughton Vets in New Broughton where two nurses looked after them for a few days before a transfer to RSPCA Bryn-y-Maen Animal Centre in Colwyn Bay.

One of the girls has since opened her eyes and they are thought to be Terriers, perhaps Jack Russells.

They are now being cared for round the clock with bottle feeding every three hours and are all making good progress.

The RSPCA has appealed for information about the incident and say it yet again reinforces the need for people to get their dogs neutered to prevent unwanted litters.

Centre manager Victoria Williams said: “Luckily the puppies were found before it was too late.

“We think they were only about a week old when they were abandoned and at that very young age they obviously wouldn’t have survived for any length of time on their own.

“Thankfully they are now all making good progress and being bottle fed by us every three hours, although we remain very concerned for the welfare of the mother dog as she will no doubt be really missing her babies.

“It’s just very sad that despite all the education by animal welfare charities there are still some people who are failing to neuter their pets, resulting in distressing incidents like this.”

Anyone who has any information about the puppies should contact the RSPCA’s appeals line in complete confidence on 0300 123 8018.

To get the latest newsletter from WalesOnline, click here