Five F1 Spanish GP updates you may have missed

While almost all of the attention on car changes has been on Aston Martin amid a copycat row with Red Bull, there have been plenty of other noteworthy ideas to emerge up and down the pitlane.

Here we take a look at the most interesting upgrades that have been spotted so far.

Red Bull has a revised front wing, enabling it to generate more load and balance it against the high downforce rear wing it has mounted on the RB18.

However, in terms of non-circuit specific updates, we have to look at its floor and more specifically the region where the sidepods undercut meets with the widest section of the sidepod bodywork for something a bit more detailed.

It’s here, which the team noted in the pre-event automobile notes, that it has added a teardrop shaped blister in order to influence the airflow’s direction and improve the total pressure on the upper surface of the floor (red arrow).

However, what’s also new but wasn’t expressly talked about, is an upturned lip now applied to the section of floor before the cutout (blue arrow) that will defend against the airflow spilling off the surface.

These two small adjustments have been made in combination in order to better manage the airflow's route and pressure distribution in that region, not only to improve performance locally but also up and downstream of the section.

Ferrari has a new, higher downforce, rear wing this weekend, which the team tested in advance at Monza during a filming day. It features a revised spoon shaping to the mainplane and the upper flap has a deeper chord length in the outboard section.

Ferrari first tested a new specification floor and diffuser in Australia but, having only one manufactured at that point and perhaps not giving the instantaneous uplift in performance it expected, it wasn’t raced.

In order to unlock the performance merits of that floor and diffuser, the Scuderia has made a significant change to its outer floor strake this weekend.

Now longer and much taller than the team has used before (see dotted yellow line for position of previous strake), the outstretched surface will help to manage the wake shed by the front tyre, while the notch created ahead of the floor transition will shed a vortex that its predecessor did not.

Mercedes has introduced a handful of new parts to help quell the ill effects posed by porpoising, which should allow the team to unlock some of the car’s latent potential that has been masked by it so far.

However, one item of interest that’s gone under the radar is that it has made further changes to its front wing, having already introduced a radical design concept in Miami.

In addition to the forwardly swept flap and endplate juncture that design entails, the team has altered the geometry of the endplate, with the surface now more inwardly angled than before (left image).

This will obviously have a bearing on the airflow’s trajectory in its own right but, the designers have also taken this opportunity as a means to alter the width of the diveplane too, making it considerably wider when compared with the previous specification (right image).

McLaren had a laundry list of parts at its disposal this weekend as it looked to improve almost every aspect of the MCL36.

One element of this upgrade is a return to carbon fibre innards for the brake assembly, with the team using a titanium brake disc enclosure throughout the course of the opening five races (left).

This followed on from the team arriving at the pre-season test in Bahrain and establishing it had a problem that had not arisen in the first running at Barcelona.

The original carbon fibre enclosure led to overheating issues and resulted in running being heavily curtailed during the Bahrain test. The titanium variant had been introduced as a stop gap while the team found a more suitable design solution.

That solution has arrived in Spain (right) and features a much larger enclosure, along with revisions to the inlet, fence and deflector and the pipework that feeds cool air to the caliper.

Alpine is another team that has revised its front wing endplate for the Spanish Grand Prix, with the team taking note of the design employed by Haas since the start of the season.

As denoted by the yellow line, the leading edge of the endplate now features a wave-like profile, albeit not as pronounced as the Haas design.

A kink is also now apparent in the section just above the flap juncture too (red arrow). The designers have also reworked the diveplane (inset), which adds angle of attack to the S-shaped surface when compared with its predecessor.

The team is also running with a full-length Gurney flap on the trailing edge of the upper flap this weekend, whereas previously it had run an abbreviated version to help balance the car front-to-rear. 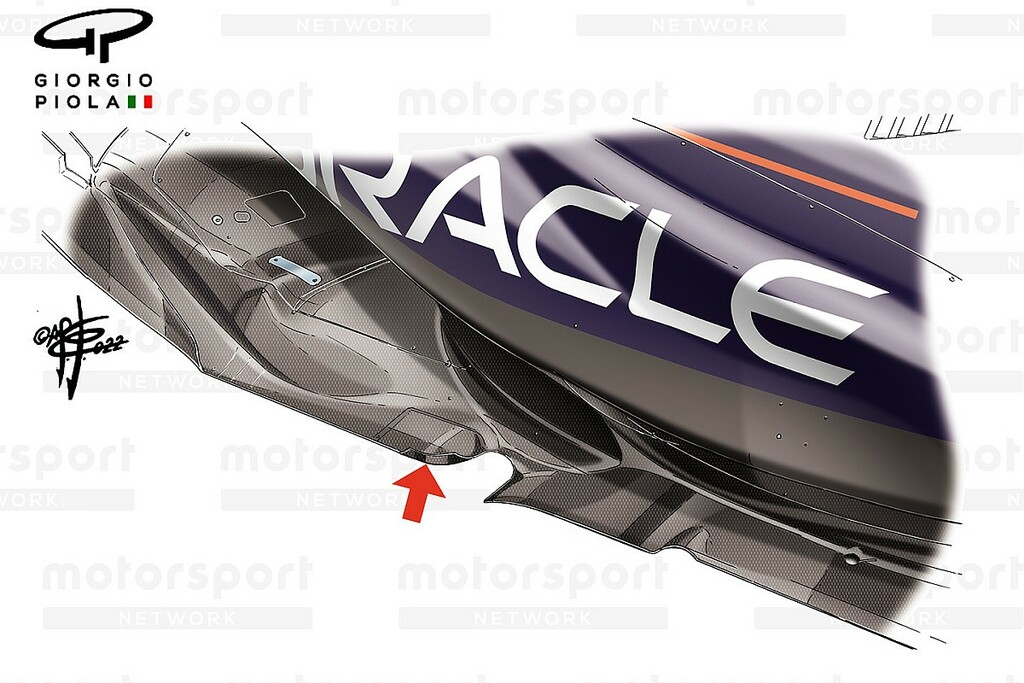