Criticism is building over how Texas law enforcement agencies responded to the mass shooting at Robb elementary school in Uvalde, after authorities confirmed yesterday that the gunman remained locked inside a classroom for up to an hour as large numbers of police officers massed outside, with desperate parents begging them to take action.

Victor Escalon, the south Texas regional director of the state’s department of public safety, said it was unclear if more prompt police action could have saved any of the 21 lives lost – he said most of the gunfire occurred at the beginning.

In Uvalde, residents struggle to continue on with their lives under a heavy cloud of grief. Heartbreak upon heartbreak has piled on this small community: yesterday, Guadalupe “Joe” Garcia – whose wife, 46-year-old teacher Irma Garcia, was shot and killed while protecting children in her classroom – died of a heart attack. “I truly believe Joe died of a broken heart and losing the love of his life … was too much to bear,” his wife’s cousin wrote on a GoFundMe page.

Meanwhile, today the National Rifle Association will hold its annual meeting in Houston. Donald Trump and the Texas senator Ted Cruz are expected to attend, with the Texas governor, Greg Abbott, reportedly cancelling plans to attend and visiting Uvalde instead. Here’s a look at how lawmakers in thrall to the NRA stifle gun safety laws.

Nine people were killed and 17 injured in artillery attacks on the northern part of Kharkiv. Life had begun returning to normal in Ukraine’s second largest city after Russian troops were pushed back from its outlying towns and villages.

“There’s no logic to it, it’s just terror against the local population, to sow panic and to destroy critical infrastructure,” Kharkiv’s regional governor, Oleh Synehubov, said.

The actor Kevin Spacey is facing charges of four counts of sexual assault against three men for incidents that allegedly took place in London between March 2005 and August 2008, and in Gloucestershire in April 2013, the Crown Prosecution Service has said.

Spacey has previously denied the allegations against him.

Ray Liotta, the actor best known for his roles in Goodfellas and Field of Dreams, has died at the age of 67. According to his representative, Liotta died in his sleep in the Dominican Republic, where he was shooting his latest film Dangerous Waters alongside Saffron Burrows.

Workplace suicides have risen dramatically since the early 2000s, with 180 cases officially reported in 2005 and 307 cases reported in 2019, the latest year with data available. The figure is probably an underestimate, as many suicides aren’t included in this data because they’re tough to classify as work-related if they occur outside the workplaces or work hours.

Don’t miss this: Where the bison roam

Members of the Confederated Salish and Kootenai tribes are celebrating the tribes’ reclamation of management of the National Bison Range in Montana after more than a century of federal management and nearly two decades of negotiations. “It’s a restoration of a piece that was missing. It represents a gift of what we may care for to protect and have something for future generations,” said the tribal chairman Tom McDonald.

Over the past decade, waves of employees have co-signed letters and quit en masse after waking up to the role their work played in contributing to climate breakdown. The Guardian spoke with three such former employees, who who revealed their experiences closing the door on fossil fuel projects, and shared advice for others who may consider following in their footsteps.

Want more environmental stories delivered to your inbox? Sign up to our new newsletter Down to Earth to get original and essential reporting on the climate crisis every week

In Taiwan, hundreds of people who legally altered their name to “Salmon” in return for free sushi reportedly became stuck with it, prompting Taiwanese parliamentarians to debate changing legal limits on name changes. The promotion offered free all-you-can-eat sushi for a whole table to anyone with the Chinese characters for salmon, “gui yu”, in their name, which led to the creation of names such as “Salmon Dream” and “Dancing Salmon”. 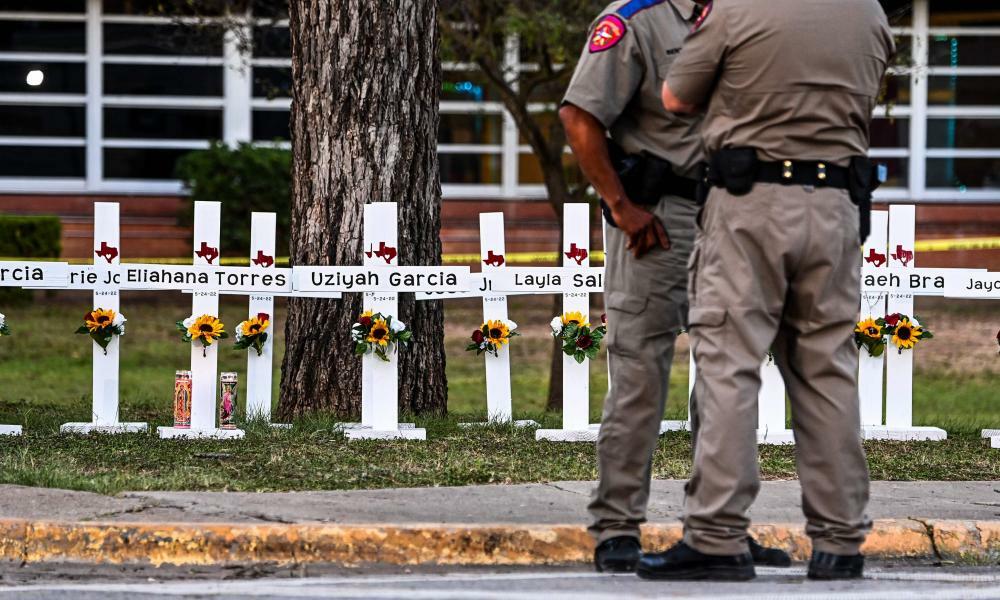 ‘More could have been done’: Texas police under scrutiny over response to school shooting
Gunman remained barricaded inside a classroom for up to an hour before his rampage was brought to an end

The Guardian - US
One subscription that gives you access to news from hundreds of sites
First Thing: Nineteen children and two adults killed in Texas school shooting

Lawmakers and gun control groups lead calls to stop carnage, saying ‘it is our choice to let it continue’. Plus,…