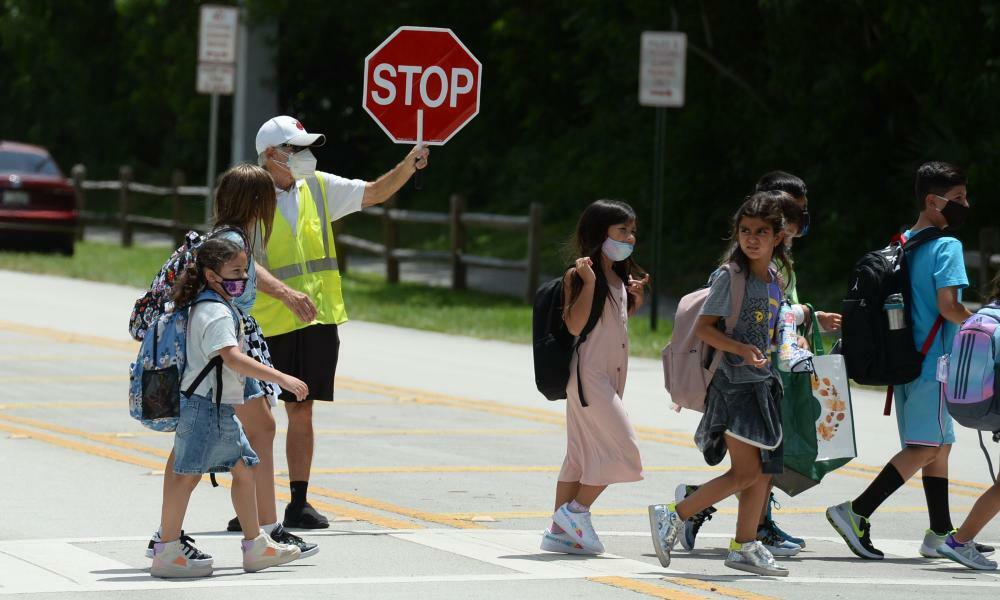 While many parents might be relieved to be sending their children off to school this week, health experts are highlighting a troubling trend: hundreds of thousands of them are testing positive for Covid.

Cases among children have increased 10% in two weeks, with more than 250,000 new infections in the last week of August, the American Academy of Pediatrics (AAP) said. It is the highest infection rate among children since the start of the pandemic.

A total of 750,000 children tested positive between 5 August and 2 September, the AAP said. In the same time period, 54,859 children were admitted to hospitals, according to the Centers for Disease Control and Prevention (CDC).

Joe Biden has asked Sean Spicer and Kellyanne Conway to step down from the boards of military service academies or be fired, the White House has confirmed.

Spicer, a former White House press secretary, and Conway, a former adviser, are two of 11 Trump appointees that have been asked to step down.

Trump White House tried to play down US injuries in attack by Iran, says ex-official

Donald Trump’s White House asked the Pentagon to play down and delay reports of brain injuries suffered by US troops from an Iranian missile attack on Iraq last year, according to a former defense spokeswoman.

Alyssa Farah said she fended off the pressure from the White House, which came after Trump had first claimed there had been no casualties and then dismissed the injuries as “headaches” and “not very serious”.

More than 100 US troops were ultimately diagnosed as having suffered traumatic brain injuries in the missile attack on two bases in Iraq housing US troops on 8 January 2020, launched by Tehran in retaliation for the US drone killing of Revolutionary Guards general Qassem Suleimani five days earlier.

Stat of the day: the wealthiest 1% of Americans are responsible for more than $160bn of lost tax revenue each year

A report by the US treasury has found the wealthiest Americans are responsible for 28% of what is known as the “tax gap” – the difference between taxes owed and taxes collected. This mismatch, worth a huge $600bn a year – $160bn from the wealthiest 1% – would amount to $7tn of lost revenue over the next decade, the treasury said. According to the report, the wealthiest 5% of US taxpayers account for more than 50% of lost tax revenue annually. For the top 20%, the figure is 77.1%.

Don’t miss this: ‘I want to show intimacy between men’ – How Murray Bartlett became a breakout star at 50

After his breakout role in the critically acclaimed HBO show The White Lotus, Murray Bartlett talks to Chris Godfrey about being a people-pleaser and the importance of showing love and intimacy between men onscreen. “I hope that we are seeing more freedom of expression in that way,” he says. The 50-year-old actor, who you may recognise from the soaps All My Children and Guiding Light or perhaps as a guest star on Sex and the City, is set to star in another HBO drama, The Last of Us, based on the critically acclaimed and hugely successful video game.

The world’s largest plant designed to suck carbon dioxide out of the air and turn it into rock is up and running. The plant – which is named Orca after the Icelandic word “orka”, meaning “energy” – consists of four units, each made up of two metal boxes that look like shipping containers. When operating at capacity the plant will draw 4,000 tonnes of CO2 out of the air every year, according to its owners. It is not a lot, especially considering the $10m-$15m cost of the build, but this kind of tech is in its infancy and could eventually become a major tool in the fight against the climate crisis.

Want more environmental stories delivered to your inbox? Sign up to our Green Light newsletter to get the good, bad and essential news on the climate every week

Bears have taken it upon themselves to patrol South Lake Tahoe in California after the area’s 22,000 residents were evacuated because of the raging Caldor fire. With residents gone, garbage service suspended last week and fire burning through their habitat, bears have been digging through the resort town’s trash cans and have broken into homes in search of food. “They’re getting ready for winter so they’re trying to pack on the calories,” said Eric Palmberg, a public information officer with the sheriff’s office.