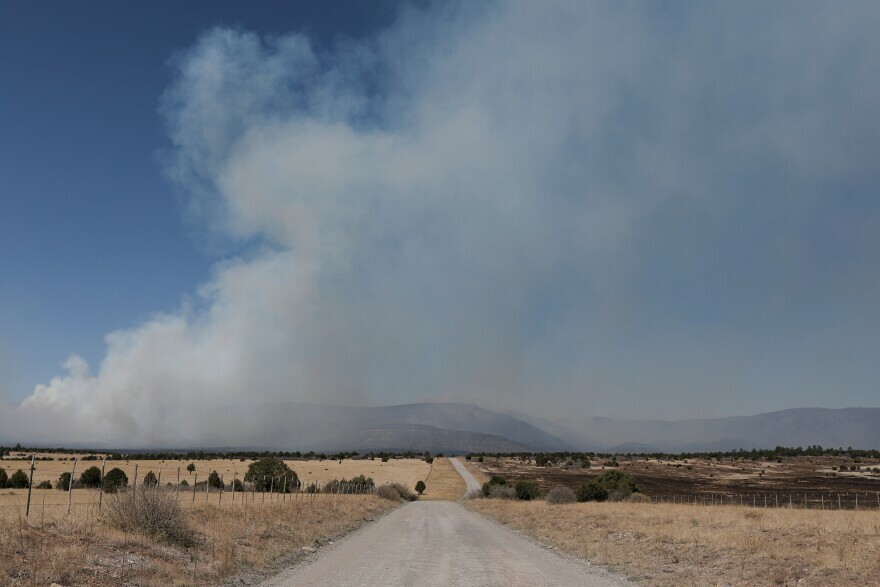 Fire crews battling the massive New Mexico wildfire want a break from relentless wind
The giant, wind-whipped blaze burning in New Mexico has displaced tens of thousands and is on track to become the…

Many homes near America’s largest wildfire have survived the latest barrage of howling winds and erratic flames.

New Mexico’s governor is asking for additional federal assistance to respond to wildfires burning across the state’s north, including one…

Exhausted fire crews are hoping to catch a weather break soon from relentless wind as they try to contain a massive and growing wildfire in northern New Mexico that is on track to soon become the state's largest in history.

"This is definitely a remarkable wind event fighting this fire and it's not showing like it's going to slow down," says Ryan Berlin, a fire information officer on what's known as the Calf Canyon-Hermits Peak Fire, after two wildfires merged into one giant blaze. "We don't have any predicted moisture coming in over the next seven to ten days," Berlin says. "So we need a little help from Mother Nature to shut the wind down, and a little rain."

The fire, so far, has burned more than 260,000 acres and has already burned more total acreage than all of the acreage lost to wildfire across the state in 2021. The fire is just 29% contained, and has grown by about 90,000 acres in just the last week, officials here say.

The winds have wreaked havoc on attempts to control the fire

There are worries that this, the largest wildfire currently burning in the U.S., will continue to be almost impossible to contain. Decades of mega-drought in the southwest, combined with a century plus of federal fire suppression policy has left forests full of bone dry fuel. And the impacts of human-caused climate change are fueling more mega-fires like this one burning in the foothills of the Rocky Mountains just south of the Colorado border.

The winds have wreaked havoc on attempts to control it. Firefighters have seen day after day of powerful "red flag" winds – dangerous winds with gusts up to 50 and 70 mph at times since the fire started in early April. In one recent stretch, red flag wind conditions lasted 59 hours nonstop.

"It is pretty extraordinary to have a red flag warning to last for 59 hours," fire meteorologist Bladen Breitreiter says. "It is, as far as my memory goes back, unprecedented."

New crews are on their way. The nearly 1,900 fire personnel and support staff battling this fire hope this weekend brings some measure of relief. Winds are forecast to die down a little Friday and throughout the weekend.

But meteorologist Breitreiter warns that winds will still likely gust 20 to 28 MPH. "Anything feels better when you're not gusting to 55 mph," Breitreiter says. "We still might get into some critical fire weather wind conditions and we are still exceptionally dry so we will still see elevated fire conditions," he says.

In all, Breitreiter says the fire zone area has seen red flag wind conditions in 26 of the 36 days since the fire erupted April 6. Across the state, New Mexico has seen 30 red flag days since April 1.

"Man I tell you that's been a huge challenge for us," says incident commander Dave Bales, a veteran wildland firefighter. "I've been doing this for, oh, about three and a half decades and I have not seen that many red flag events in a row, especially this last event when we had up to five days straight of a red flag – day and night."

Unpredictable "spot" fires, where winds carry embers ahead of the fire front and start new blazes, have been especially difficult in this fire, Bales says. "Trying to go on a direct fire edge with a dozer or a hand crew or retardant line, a two-mile spot (fire) is gonna jump that," he says. "So that has been our biggest challenge so far."

On many days howling winds have grounded fire-fighting aircraft and started spot fires one to two miles away beyond hard-fought fire containment lines.

Crews got a tiny bit of good news Wednesday as fire officials were able to get some helicopters and fixed-wing aircraft dropping water and fire retardant on the southern edge of the stubborn blaze for a short period of time, despite more red flag warnings and winds gusting in some areas above 45 mph. Aircraft were grounded, however, for other sections of the fire on Wednesday and strong More than 4,000 homes in the four counties affected by the fire are under mandatory evacuation orderswinds again grounded aircraft on Thursday.

More than 4,000 homes in the four counties affected by the fire are under mandatory evacuation orders

Getting some citizens to heed evacuation orders has been a challenge. Some ranches and farms have been in the same family for multiple generations. Many Native American residents see the forested and rocky landscape as sacred.

"It's very difficult for these people, for some of them their homes are generational," San Miguel County Sheriff Chris Lopez says. "When we go in there to do evacuations you really have to talk with them. I try to do it very systemic, especially with our 'ready set go' process it helps them to prepare," he says.

Lopez says those who choose not to leave are potentially endangering themselves and first responders. "We want them to get out, as property and homes can be replaced, but lives can't."

A Red Cross assessment shows the fire has destroyed more than 300 structures, including an unknown number of homes. But that figure has stayed static for days. Fire officials believe the real number of homes and buildings destroyed will rise substantially once it's safe to enter and fully assess areas burned by the fire.

Part of this fire that started at Hermits Peak was sparked by an intentional or "prescribed" burn set by the U.S. Forest Service that got out of control. Such fires are set to thin forests of built-up fuel, restore forest health and prevent bigger fires.

New Mexico's governor and Congressional delegation have called for a full investigation.

"It's negligent to consider a prescribed burn in the windy season in a state that is under an extreme drought warning statewide," said New Mexico Gov. Michelle Lujan Grisham. Gov. Grisham called on the federal government to accept significant liability for this blaze. While generally supportive of prescribed burns, the Democrat also has previously called on the federal government to change its rules around intentional fires in the southwest especially during the windy season.

Santa Fe National Forest ranger Steven Romero apologized at a recent online meeting. "We take full responsibility, and with a heavy heart, we are really sorry for what happened." Romero added that the agency's "burn plan" was well-prepared and favorable weather conditions were forecasted. High winds, he said, had sprung up unexpectedly.

But many residents are angry and frustrated. They want to know why the Forest Service chose to go ahead with an intentional blaze despite wind warnings. There are reports that the Forest Service team that ignited the intentional burn had been warned beforehand of poor weather, including potential wind gusts up to 25 mph and very low humidity.

"I want - we want to know why. Like, what made you decide that was OK?" Sophia Romero told Member Station KUNM's Alice Fordham. Romero fled the fire from her home in Mora County with her children. "They know New Mexico weather, especially northern New Mexico weather. We had a very dry winter."

The fire has, so far, spared population centers and larger towns in the state. It does have the potential to burn towards more populated mountain resort towns in northern New Mexico including Angel Fire ski resort and Taos Canyon. Those areas were told to be ready to go, if evacuations are ordered.

"There is a possibility with the models that we're running, that those areas are going to see fire," says Todd Abel, Southwest Area Incident Management Team operations section chief.

The fire is, as of now, burning away from Taos, a popular tourist area 40 miles south of the Colorado state line.

Abel says crews are doing all they can to protect homes in the blaze's path, including prepping the perimeters of properties via brush clearing and water systems, when they can safely do so.

But Abel also warns residents that there is a limit. This is a fast-moving, unpredictable fire, he says, adding, "We will not put firefighters in front of the fire especially with the way it's moving these days with the amount of wind and fire behavior" for a month straight now.

"They wouldn't survive. We would have fatalities of our firefighters," Abel warns. "They have a family," he says, "and we need to make sure they go home safe at the end of the day."

Fire crews battling the massive New Mexico wildfire want a break from relentless wind
The giant, wind-whipped blaze burning in New Mexico has displaced tens of thousands and is on track to become the…

Many homes near America’s largest wildfire have survived the latest barrage of howling winds and erratic flames.

New Mexico’s governor is asking for additional federal assistance to respond to wildfires burning across the state’s north, including one…