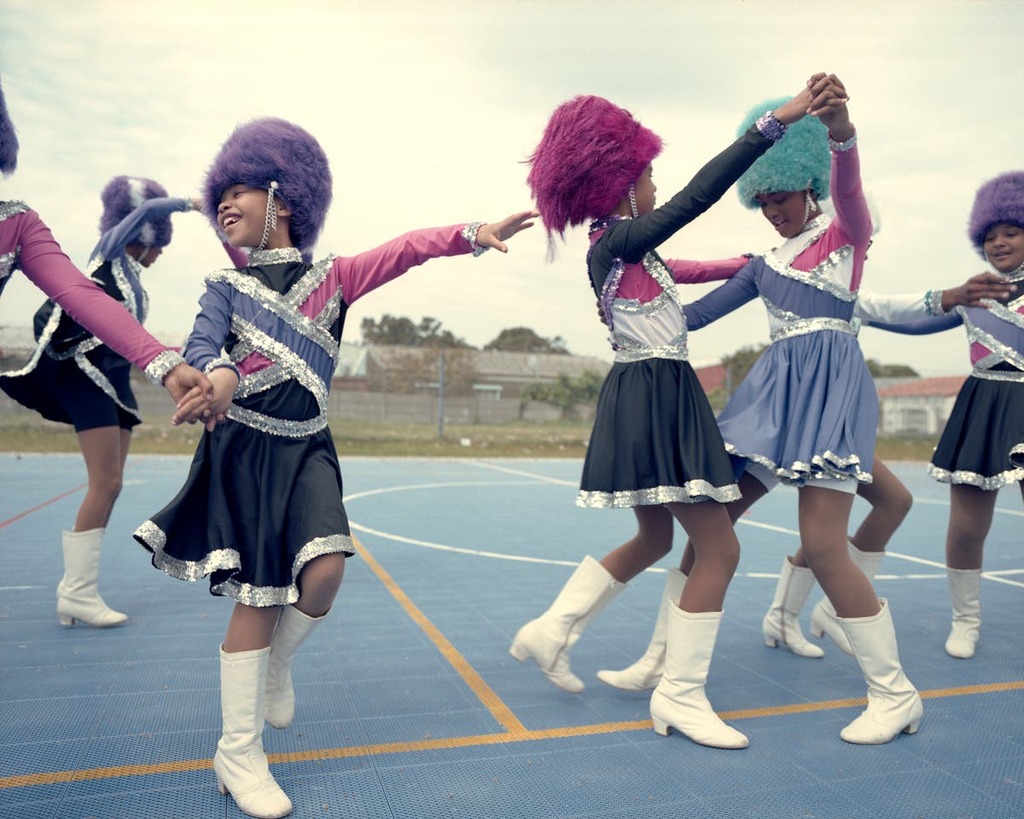 Drum majorettes came to South Africa in the 1970s, and by the early Eighties the synchronised, baton-twirling gymnastic display had taken the country by storm. But the sport’s popularity has waned ever since and it is now viewed as a nostalgic quirk of a bygone era.

In marginalised communities however, the sport remains a lifeline for many girls. Becoming a majorette means making friends, learning tricky athletic feats and proving themselves through a demanding rehearsal schedule. Throughout the poorer areas of South Africa today, you might hear the sound of the marching band, and catch a glimpse of the drum majorettes, known as drummies, in their distinctive colourful uniforms.

South African photographer Alice Mann began photographing drummies in 2017, visiting eleven schools in the Western Cape and Gauteng provinces. Her colourful portraits, taken with a medium format film camera, show drummies both in rigorously synchronised formations, and in looser, personal moments backstage, when each girl returns to her own individuality. These photographs are now being released as a new book, Drummies, published by GOST Books.

Her work highlights the difficult circumstances that many drummies live in – their bright, sharp uniforms often contrast with the unloved, dilapidated schools they are practising in. Being a drummie can be a channel for upward social mobility for South African girls, a space to display discipline and achievement and stay away from criminal activity in the area. Their spangled uniforms, often expensive, are a way of defiantly displaying a sense of worth which is not necessarily conferred on them by the wider society.

Her work shows the power that the sense of teamwork gives to the drummies; in a group, they are often staring straight at the camera with a gaze that seems to challenge the viewer. It was important for Mann to include them in the staging and production of the photographs in order to engage them with the project, and not render them passive subjects.

“This is part of my ongoing work exploring notions of femininity and empowerment in modern society,” says Mann. “With my continued investigation into this subculture, I hope that these images can communicate the pride and confidence these girls have achieved through identifying as ‘drummies’, in a context where they face many social challenges.”

“I want these images to function as a testament to the commitment and determination of these young female athletes, in a world where so many sporting opportunities are still focused on men.”

‘Drummies’ by Alice Mann is published by Gost Books. An exhibition of the project is at Kunsthal Rotterdam until 23 January 2022