The prime minister, Scott Morrison, and the Labor leader, Anthony Albanese, have maintained a cracking pace on the final day of the election campaign. Guardian Australia’s Paul Karp and Josh Butler were with the leaders on Friday as they raced towards Saturday’s finish line.

Morrison’s campaign has come full circle. It started as a case of “better the devil you know”, then took a diversion in the penultimate week when he introduced his vague bulldozer analogy to suggest he can change.

In the final week Morrison has said bulldozers can help “get things done” and all he will do is change gear. By the final day it became clear the wheels have fallen off the now entirely incoherent analogy, and it’s continuity, not change, Morrison is offering once again.

Friday started with a round of morning interviews, in which Morrison’s view that the economy means unemployment and government debt was challenged by those who know that for many people it actually means prices and real wage cuts. He struggled to get TV and radio interviews all around the country back onto the opposition’s costings and the Coalition’s super release policy.

The first stop was a community breakfast at Karawara in Swan (Perth), a Liberal-held seat that is tipped to fall to Labor’s Zaneta Mascarenhas, where Kristy McSweeney is vying to replace the retiring MP Steve Irons.

Journalists were promised friendly local families which, in reality, means friendly to the prime minister because attendees are carefully selected, mainly Liberal members.

Morrison talked up the need for a good local representative, stumbling over the candidate’s name by referring to her once as Kirsty. With recourse to his notes, he got the name right, then peppered his speech with corrected references to Kristy. Everyone is tired. Mistakes happen.

Since joining the bus I’ve realised that so much of the perception that, unlike Albanese, Morrison knows the stats and answers questions transparently is just down to his slicker presentation style and preparation by his staff: the figures printed on a page, a shorter escape route, shouts of “thanks media” to obscure he is leaving with questions unanswered.

At the Jindalee housing estate in Pearce, Morrison followed his usual pattern of meeting a few happy new homeowners, who received homebuilder grants of $25,000 in the pandemic and thought accessing superannuation was also a great idea. The only renters you’re likely to meet on the Morrison bus are those waiting for their new build to finish.

After inspecting the floor plans, Morrison fronted the media one last time to intone attack lines about Labor’s handling of the economy and the choice facing Australians.

Asked if he could show empathy to the Murugappan family and allow them to return to Biloela, Morrison said giving visas out was like writing “a prospectus for people smugglers” and that electing Labor would see “all of that terror come back” (despite there being barely a cigarette paper’s difference between Labor and the Coalition’s policy).

Morrison was also pressed by Guardian Australia about how Australians can trust his last-minute conversion, given the shifting bulldozer analogy, and what of substance he had actually changed.

Morrison responded that he disagreed with the “assertion” and “argument” he said was contained in the question, and bulldozed on, this time with a smile and a jibe that I, the reporter, was “sounding like a bit of a bulldozer” myself.

At the Wanneroo rugby union club, Morrison announced a $4m grant, noting with fondness that he had grown up around a similar club. That would be before his conversion to league and supporting the Cronulla Sharks, a shapeshift that proved a little more lasting.

Serving some journos and his own staff at the sausage sizzle of the club’s barbecue lunch, Morrison extended an olive branch to this correspondent: “There’s veggie ones here too, Paul.”

Next we arrived at the Sikh Gurdwara Perth, a temple in Hasluck near the border with Cowan, Morrison again mixing offence against Labor’s Anne Aly with a bid to shore up the Indigenous affairs minister, Ken Wyatt, who has held Hasluck since 2010, with a further stop in a manufacturing business in Cowan to come.

Morrison’s final day involved five stops in four electorates. It was a whirlwind of activity as the election rushed to its conclusion.

Morrison is nothing if not vigorous as he keeps the plates spinning in so many different parts of the country – but whether he’s spun out of trouble again or spun off course, we will not know until election night.

Albanese promised a “final sprint” in the last days. Friday, the last full day of the election, lived up to the hype as the usually moderate pace of the Labor leader’s campaign was as supercharged as the three coffees he said he’d gulped before 9am.

In a three-state blitz of marginal seats on the final day of the campaign, Albanese hit Boothby, Sturt and Bass, ahead of a swing through Victoria on Friday night. He brought local firepower in the former PM Julia Gillard, who appealed directly to the women of Australia in saying an Albanese government would be one that “cares about, values and includes women”.

A quiet cafe descended into a bit of chaos as the national media pack and half a dozen politicians crammed in for a photo op, along with a group of Liberal volunteers brandishing “won’t be easy under Albanese” signs. The campaigners, wearing shirts for the Liberal MP James Stevens, were quickly shooed out by the owner.

Locals told journalists that Sturt was a longtime Liberal area, but claimed there was a “mood for change” on the ground. Other cafe regulars asked “what’s going on here?” as they entered to see a dozen flashing cameras.

Labor heavyweights Penny Wong, Mark Butler and Don Randall chatted, as a wall-mounted TV behind them played Channel Seven’s morning show, coincidentally featuring Christopher Pyne – the former Liberal MP for Sturt – in a segment on the most notable gaffes of the election campaign.

Albanese sipped a piccolo, Gillard a long black. A local married couple peered curiously through the window at the packed cafe, saying they wanted “fewer words, more action” from politicians., as they were “despairing the state of the world”.

Asked if she had any tips for Albanese’s final day on the trail, Gillard said “he doesn’t need my advice” and that he was “campaigning magnificently”.

Then off to a school in Boothby with new South Australian premier, Peter Malinauskas, the trio of senior Labor politicians getting absolutely mobbed by kids for selfies at recess time.

Gillard was a hit with many young women, who flocked for photos and quick conversations. Albanese waved and smiled, while Malinauskas shook hands and tossed a footy with some of the older boys.

But not everyone was exactly up-to-date with who they were flocking to get photos of.

“He’s the guy running against ScoMo,” one young girl told her friend.

“Is he the guy in the glasses?” one queried back.

“What’s he doing here? None of us can vote,” noted one boy.

A press conference in the school’s courtyard saw Albanese in a contemplative mood, fielding questions on what he’d learned in the campaign, what it means to him, and saying his late, beloved mother Maryanne would be “proud as punch” of her son, standing on the cusp of victory.

“During this campaign, I’ve been positive. I’ve been who I am. I don’t pretend to be perfect,” he said.

Guardian Australia asked what he learned from his own mistakes in the campaign. He replied: “Own it.”

On to a plane across Bass Strait, skipping to the ultra-marginal Liberal seat of Bass to encourage volunteers at a pre-poll. At the biggest booth in Launceston, the Labor candidate, Ross Hart, and the sitting Coalition MP, Bridget Archer, stood handing out how-to-vote cards. Albanese swept in, shaking hands and taking selfies with supporters.

Archer said she guessed Albanese would be in town, judging from the large crowd of red-shirted Labor types who arrived shortly before.

“Most work they’ve done in two weeks,” she joked.

“Once they start bussing the unions in, you know it’s on.”

The booth, next to a giant Pet Barn, saw early voters streaming in and out. Few ordinary folks seemed to notice, or care, about the arrival of the Labor leader.

A man in tradie high vis told us he didn’t even vote, just walked in and got his name ticked off.

“I’m not about politics, they’re all the same. No point,” he said.

An older woman, Estelle, said she voted Greens – but wanted Albanese to win.

“Bloody oath, I don’t know what I’d do if the other guy won,” she said.

In and out of Tasmania in 90 minutes, after a seven-minute visit to the pre-poll, the Albanese campaign was back in the air and gone. Destination: Melbourne. On the last night of the campaign, the Labor leader will appear on the ABC’s 7.30 program – after making a virtue of fronting up for media interviews the PM wouldn’t.

“We can do so much better,” Albanese says, in a black T-shirt and his skinny grey chinos.

Spliced with staged footage and clips from the election trail – including packed campaign rallies and cuddling babies – Albanese presents the election choice as “three more years of the same or unlocking the potential of this great country”.

“Our best days are ahead of us,” he said.

It’s now up to the voters to decide whether Albanese’s best days are ahead of him. 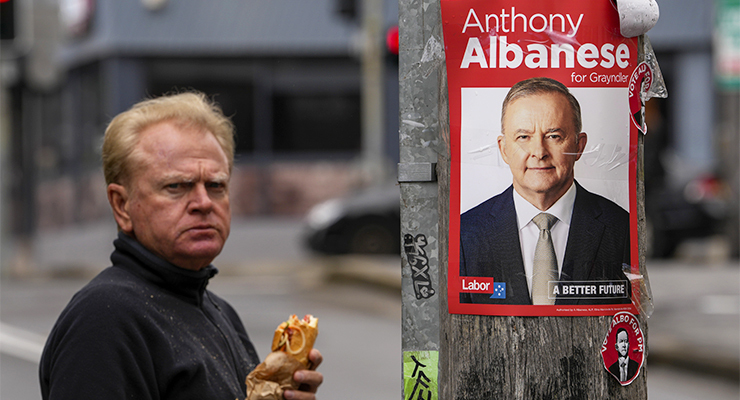 On the campaign’s final, frantic day, Morrison and Albanese blitz marginal seats
It’s the final day of the campaign — thank God for that.

Six weeks of campaigning. Six weeks of images. While some could argue there was a lack of policy ideas in…

ABC News
Federal election: All the updates from the campaign with Anthony Albanese and Scott Morrison — as it happened

The economy remains at the centre of the election campaign, with the latest unemployment data released on Thursday, along with…