Fiji announces plan to open borders to tourists by November

By By Prianka Srinivasan 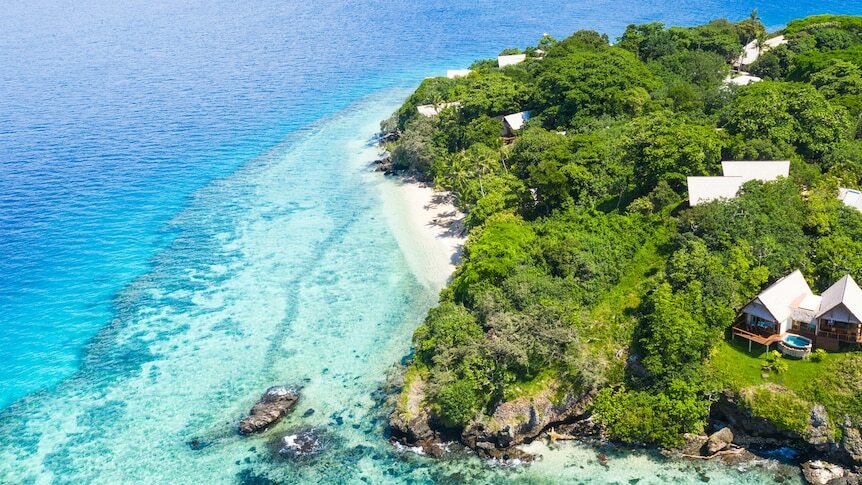 A Pacific island getaway has been out of reach for many Australians during the COVID-19 pandemic.

But that might change in just a few months.

In the midst of battling a COVID-19 outbreak, Fiji has announced plans to reopen its borders to tourists by November 1.

By then the government expects to have fully vaccinated at least 80 per cent of its eligible population, and believes it can safely welcome international visitors again.

Tourism Fiji CEO Brent Hill said he was confident the country could reach the vaccination targets in time – but encouraged visitors to seek travel insurance in case they were forced to quarantine.

"The key thing is, if you've got a really strong level of local vaccination, coupled with only accepting fully vaccinated travellers who test negative before they get on the plane, then you're dramatically reducing the risk," Mr Hill said.

Australian airline Qantas has already started advertising December flights to Fiji and other "COVID-safe destinations", anticipating Australia will also have opened its borders by then.

Qantas CEO Alan Joyce said he had been in talks with the federal government about the resumption of flights, and countries with "similar vaccination levels" of 70 to 80 per cent would be possible destinations.

"We think everything should be ready and certainly should … have a firm plan by the end of the year," he said.

Fiji is also finalising its program, with James Fong, permanent secretary of the Ministry of Health, saying the government is considering a "corridor" within which fully vaccinated tourists and Fijians can operate.

"What has to happen, together with opening the international borders, is a heightened level of community surveillance," Dr Fong said.

Tourism Fiji has said only tourists from countries that allow quarantine-free travel will be allowed to visit.

But Fiji hasn't conquered its COVID-19 outbreak yet.

That has some worried the country's plans to reopen are far too premature.

'It's certainly too soon'

At its peak in July, Fiji's infection rate was the highest per capita in the world.

Though case numbers have dropped since then, there are currently more than 13,000 active cases in the country, including at least 100 people still in hospital.

A vigorous vaccination campaign, which has included controversial "no jab, no job" measures, has led to more than 90 per cent of Fiji's target population receiving at least one dose of AstraZeneca or Moderna.

Mr Hill said the success of Fiji's vaccination drive had given the country confidence to reopen in November, even though community transmission was still present.

"I think we're being as prudent and careful as we possibly can be," Mr Hill said.

But not everyone shares that confidence.

Sashi Kiran, the founder and CEO of a grassroots NGO called the Foundation for Rural, Integrated Enterprises and Development (FRIEND), has been helping vulnerable families during the pandemic.

She is particularly concerned that the under-18s, who make up one-third of Fiji's population, are still not vaccinated.

"I'm not sure whether having a large proportion of adult people vaccinated is the reason to rush into opening our borders and risking probably much more than we gain," she said.

"It's certainly too soon [to reopen], unless our children are vaccinated, and unless we know more about the new variants, and [they] could be coming in from the different tourism markets."

Dr Fong said the government hoped to vaccinate children, but that it could be "a big exercise" and might take months to accomplish.

Optimism for a return to normal

Tourism is Fiji's largest industry, and before the pandemic it was responsible for at least 40 per cent of Fiji's GDP.

The closure of international borders has left many families struggling to earn an income.

Sisters Kalesi and Luisa Kuilau are from a village near the capital Suva, and weave traditional fans and jewellery which they sell at hotels and local markets.

With tourism drying up, they've struggled to find customers, and are excited that Fiji's borders will be open once again.

"We're really happy it's opening soon, because this is the only way we can market our product outside of Fiji."

"And then our business will be stable again like before, the normal way it was," added Luisa.

It's estimated as many as 100,000 people have been left unemployed after the Fijian government shut its borders in March, 2020 – about one in every nine Fijians.

Christopher Southwick, owner of Royal Davui Island resort, said the past 18 months had been tough for his business.

"I suppose the most challenging part of the last two years is it's just been the unknown," he said.

Mr Southwick is training his staff to practise COVID-safe measures once tourists are welcome back to the resort.

He is optimistic that the worst of the pandemic will soon be behind Fiji.

"Four months ago, it looked absolutely hopeless. But it does get better."