Fight breaks out between security guards at 'nightmare' Reminisce Festival 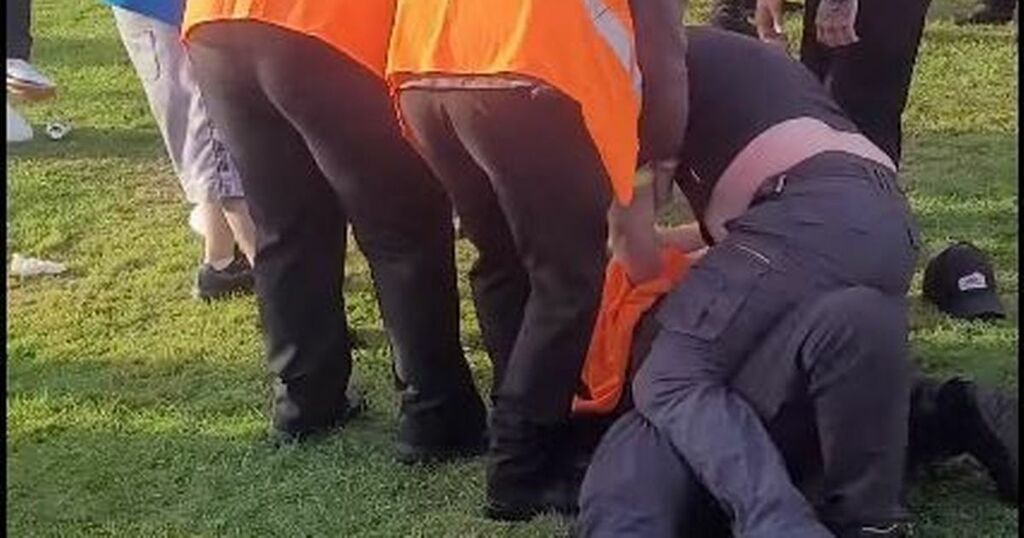 Two security guards were filmed fighting with each other in front of shocked revellers at Reminisce Festival this weekend.

The festival, held in Sherdley Park in St Helens on Saturday has attracted widespread criticism after many people said they were met with huge queues and unsafe conditions.

A video filmed at the festival and widely shared on social media, shows a security guard pinning another security guard to the ground and sitting on top of him.

In the clip, the man grabs hold of his colleague's hi-vis jacket as he climbs off him and gets to his feet.

Other staff members run over and try to intervene as the second security guard stands up and shouts "go on then, go on then."

A spokesperson for the festival, said: "Unfortunately, this year due to Covid our usual security team were unable to provide us with the full quota of staff required. Given that we had also increased our security levels this year we had to recruit from several agencies we hadn’t worked with before to make up the number of security staff we felt were needed.

"We have been made aware of this situation and the staff in question are currently under review with their respective employers.

"We were extremely disappointed by the behaviour of the particular individuals in this video, during what was already a very tough event to control due to several logistical issues that were beyond our control causing major problems.

"We pride ourselves in the provision of a safe event for our customers and are taking this situation very seriously along with the appropriate authorities."

Thousands headed to the sold out festival this weekend for sets by well-known DJs and artists including N-Trance and Basshunter.

But several said they left early, or would not go again, because of queues, payment issues and concerns over the management of crowds at the event.

One festival goer told the ECHO: "It took two and a half hours to get into the festival, there was no crowd control whatsoever.

"We queued for 45 minutes for a crate of Amstel for £100. It was supposed to be cash and card however once in it was only cash."

He described the toilets as "disgraceful" and said he too feared for his safety amid the crowd in one of the music tents.

Another festival goer told the ECHO: "I have been the last two years and and it's been absolutely amazing, really well-organised and I have always come thinking 'wow, that was brilliant, I've had a really good time'."

The woman, from Ellesmere Port, said this year was different: "We were in the queue for an hour and people were just getting really annoyed. It took 45 minutes to get a drink and then it was 45 minutes for the toilets."

Once inside, she added: "At first the mood was great because everybody was buzzing to be there. We went to a couple of tents. We had arrived about 12.30pm and queued an hour to get in but the tents were OK at the beginning. But towards 5pm the place was rammed, it was person to person."

"When we eventually got out it was such a relief.

"I'm not one to dwell on things, I'm very positive and always think the best of things. But the whole experience of queuing, the toilets, being crushed, spending hours to queue... it was just a nightmare."

In response to the concerns, organisers of Reminisce issued a statement yesterday which said: "We take the health and safety of our festival goers extremely seriously and pride ourselves in the provision of a great event experience.

"Along with a stellar line up of the usual much-loved DJs playing old school club classics, this year the festival increased their line-up with 90s pop acts such as Atomic Kitten, The Cheeky Girls, The Vengaboys, 5ive, East 17 and many more, all of whom played to fantastic full arenas with the majority of 20,000 people having a fantastic day and night in Sherdley Park.

"The event organisers work extensively with local authorities to ensure that all safety measures and protocols are in place for the protection of our festival goers.

"Whilst Covid restrictions have been officially lifted there are many things that still need to be in place for running festivals this year.

"Covid advice was issued prolifically in advance of the festival by both the festival organisers and the local authorities. Over 400 brand new toilets with hand sanitisation units were ordered on site and increased security were engaged to manage the flow of people, considerably more than the recommended amount."

They added: "This also meant that the ticketing system on the entrance was running slowly when connecting to the backup 4G system.

"4G networks are known to become unavailable at crowded events, and thousands of customers were unable to download their e-tickets at the last minute.

"This, coupled with additional police and security on arrival this year for the prevention of drug misuse, meant that access to the site was unavoidably slower than usual – resulting in considerable queues when large volumes of people were arriving at the same time."

The statement concluded: "Reminisce are saddened that a relatively small percentage of this year's attendees were unhappy with their experience and ticket holders will be contacted in due course. In addition, as is the usual procedure, a de-brief of the event will take place between event organisers and all local authorities.

"Reminisce will strive to implement anything necessary for 2022 to stop this happening again.

"Reminisce are as disappointed with this year’s problems as everybody else, but are still extremely proud of what was otherwise an incredible festival show."