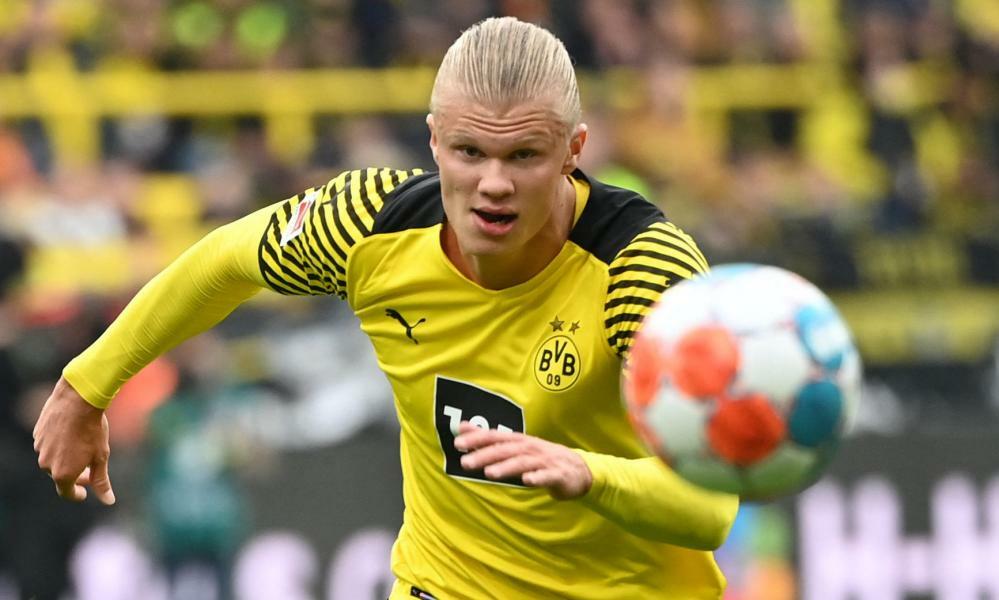 Borussia Dortmund striker Erling Haaland will join Manchester City this summer after the Premier League side triggered the Norwegian's £51.2million…

Rivaldo has given Gabriel Jesus some advice amid reports he could be set to leave Manchester City.

After months of negotiations and endless speculation, Manchester City announced on Tuesday that they have agreed a deal with Borussia Dortmund to sign Erling Haaland.

City have informed Dortmund of their intention to activate the £51m release clause in the striker's contract. In a statement City said that the "transfer remains subject to the Club finalising terms with the player," although after months of negotiations that will be a formality.

The news brought an end to a transfer saga that has rumbled on for the best part of nine months, with Haaland's most likely destination constantly switching between City and Real Madrid. Much has been made - particularly by the Spanish press - about Haaland's desire to one day play for Los Blancos, but ultimately City have won the race.

A number of factors have contributed to the 21-year-old striker choosing City over Real Madrid, primarily the opportunity to work with Pep Guardiola. There is also the complication posed by Madrid's pursuit of Kylian Mbappe and the presence of this season's top scorer Karim Benzema - under current conditions, Haaland has a better chance of making an impact at the Etihad than at the Bernabeu.

There are the family connections - Haaland grew up supporting City after his father spent three years at the club - the wages on offer (reportedly around £400,000 per week including bonuses) and the chance to prove himself in the most coveted league in the world.

As reported by The Athletic, one argument that the City camp used to persuade Haaland to join was the greater opportunity for rest and recovery at City. At Real Madrid, the manager and club president would be under huge pressure from supporters to play the star signing in every single game, increasing the pressure place on the young player's shoulders and the risk of injury.

At City, Guardiola is one of the top decision-makers. If he decided to rest Haaland, no one (whose opinion really matters) will question his judgement. City and their players are not subjected to the same kind of pressure from supporters and the media as the likes of Real Madrid and Barcelona; Ferran Torres is finding that out the hard way.

At 22 years old Ferran Torres is still in the formative stages of his career, but that didn't stop sections of the Camp Nou crowd from jeering him during the first half of Barcelona's 3-1 win against Celta Vigo this week.

Torres enjoyed a promising start to life at Barca following his £46m (plus add-ons) move from City in January, but in recent weeks has suffered a dip in form, much like his teammates. He has scored just one goal in his last 10 matches for Xavi's side.

But for a player who, having come off a three-month injury lay-off, moved teams mid-season, is that so surprising? Regardless, as a highly billed, fairly expensive signing, Torres has been singled out for criticism that is both unfair and hardly beneficial to his future development.

This is the reality at Barcelona; underperform for a few weeks or miss a string of guilt-edge chances, then the fans will quickly turn against you. Return to form and all will be forgiven, but until then, don't expect warm encouragement.

It's the same story at Real Madrid, an environment where only the very best 100% of the time is acceptable.

Given his insane return of 85 goals in 88 games, it's easy to forget that Haaland is still only 21. He has only just about finished developing physically, and having arguably been overworked over the past two-and-a-half seasons in Dortmund, he will arrive at City off the back of an injury-disrupted campaign.

Health issues aside, he will need time to adapt to a new country, a new league and, most importantly, a new team with a very different style of play.

As Torres' experience has shown, those things aren't considered when supporters of clubs like Barcelona and Real Madrid pass judgment on young players. At City, it's different though.

Haaland will likely score plenty of goals next season, but he will not seamlessly fit in with City's system or meet all of Guardiola's demands. But that's ok - at City, he will have the time to learn without the world jumping on his back.

Borussia Dortmund striker Erling Haaland will join Manchester City this summer after the Premier League side triggered the Norwegian's £51.2million…

Rivaldo has given Gabriel Jesus some advice amid reports he could be set to leave Manchester City.