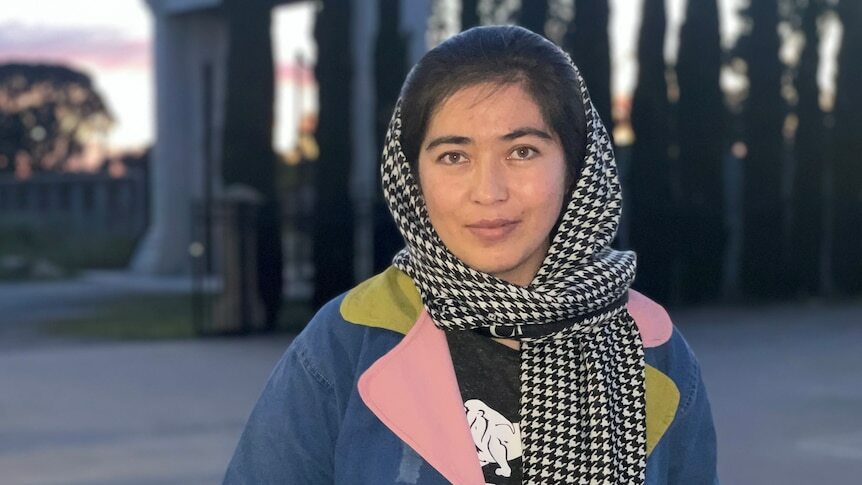 Before the Taliban took Kabul, 23-year-old Zahra Samar was training to become a fighter pilot for the Afghan military.

She had been studying at the capital's barracks for three years when she was told she needed to flee.

"The air force academy was an amazing place where I felt I could achieve my dreams, but when the Taliban took control, I lost everything that I had," she said.

"A soldier called me and told me 'Zahra you should leave the barracks right now!'

"He told me. 'Don't ask any questions, just leave, you're not safe here.'"

Ms Samar said before she could scramble to Kabul International Airport, teachers from her academy had already been targeted.

"The Taliban killed one of my teachers in front of his kids in his house; it was really painful for me," she said.

Eventually, she made it onto an Australian Defence Force evacuation flight which landed in Adelaide more than a month ago.

Ms Samar arrived on the other side of the world with just the clothes on her back.

When she first told her sister she had arrived safely, her sister, who is still in Afghanistan, did not believe her.

But Ms Samar said her joy at making it to Australia had been overshadowed by the reality still facing those she left behind.

She said her sister had told her she wanted to start drawing, to depict how bad life had become under the new regime.

"She said she wanted to show what was happening in a picture for the world," Ms Samar said.

"After she told me that I couldn't stop crying.

"They have nowhere to go: no-one is safe."

She also said another student from her academy who was still in Afghanistan was in hiding.

"The Taliban entered her house, and she had to escape out the window. If she hadn't, the Taliban would have killed her," Ms Samar said.

This week, Ms Samar joined dozens of other new arrivals, as well as Adelaide locals, for a welcome dinner.

Mariam Aslami, from the Afghan Australian Women Association, said the event was to help people like Ms Samar who knew few, if anyone, to make friends with.

"It's for them to make connections with the rest of the community, so that way they can feel the sense of belonging," Ms Aslami said.

"For women, culturally, they're usually at home, and they're not allowed to talk to strangers and things like that, so that's why it's really hard," she said.

"Even though when we reach them and call them and make contact, usually they hesitate."

It has also given Ms Samar cause for some optimism, as she begins her new life in Australia.

"I'm really trying to become a pilot and I'm trying to fly one day in the sky," she said.

"It is my biggest dream in my life."