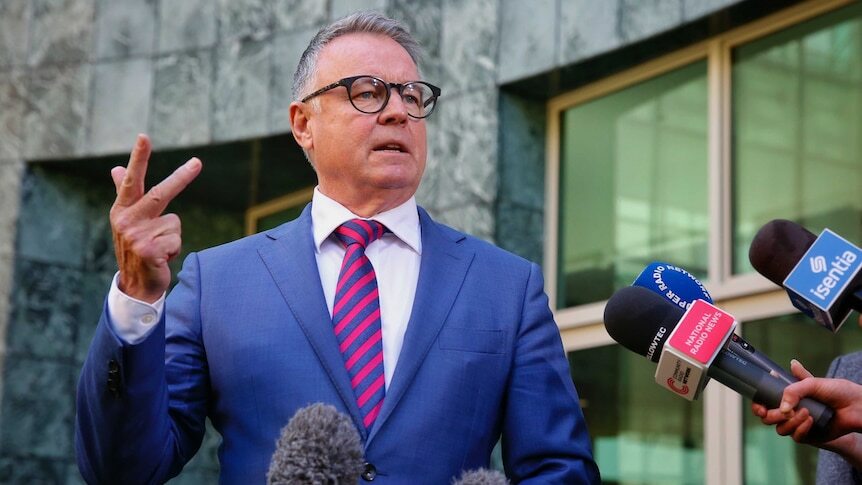 Outspoken federal Labor MP Joel Fitzgibbon is calling time on his political career, announcing he will not contest the next election.

"Despite some public tensions, Anthony Albanese and I have worked very closely together for the last two and a half years," Mr Fitzgibbon told the ABC.

"He's well placed to lead us to an election victory, which means I can now go, exit stage left, confident that I'm not letting anyone down."

"I'm not a commentator … I'm an advocate," the Opposition Leader told Sky News.

"From time to time, Joel's been one out on issues, he advocates on the record what his views are.

"It's on the record, also, that I have some differences with those views — and that's fine."

The MP has represented the coalmining electorate of Hunter, in the New South Wales Hunter Valley, since 1996.

He held onto the seat at the 2019 poll, despite a significant 9.5 per cent swing against Labor.

One Nation took a massive chunk of Labor's primary vote, prompting the debate as to whether the party had misread the mood in key regional seats.

A month before quitting as shadow minister for agriculture and resources, he urged his party to adopt the Coalition's climate policies, and argued Labor's messaging on the role for industries such as mining was leaving voters confused.

While he argued Labor had stopped the bleeding when it came to losing support of blue collar workers, he said more work was needed.

"[Anthony Albanese] has pledged strong support, but we will need to repeat that multiple times over the course of the period between now in the next election," he said.

"When you lose people like our coal miners and those working in associated industries, you don't win them back easily."

But local newspaper the Singleton Argus, owned by Australian Community Media, wrote that Mr Fitzgibbon's attempts to retain coal miners had come at the cost of an "honest" conversation about climate change.

"Let’s hope his replacement won’t pander to climate change skeptics and be brave and honest enough with our community and say fossil fuels have had their day," it wrote on Twitter.

"Even fervent local supporters of thermal coal know that our major buyers will cease to purchase the coal we produce within a decade."

Mr Albanese described Mr Fitzgibbon as a "champion of his local electorate", and knocked back suggestions the member for Hunter's departure showed a lack of faith in his leader's ability to take Labor to power.

"It shows a confidence in him, that he wants a Labor government," he told Sky News.

Mr Fitzgibbon said he had spent his time on the backbench advocating for policy changes, and was not quitting politics because of a perception he was not getting any attention from party powerbrokers.

"I genuinely believe I've made it easier for a political settlement on climate change," he said.

"We have to end the climate wars.

"The reason it's been so difficult is because people on both the right and the left see political advantage in perpetuating the climate wars."