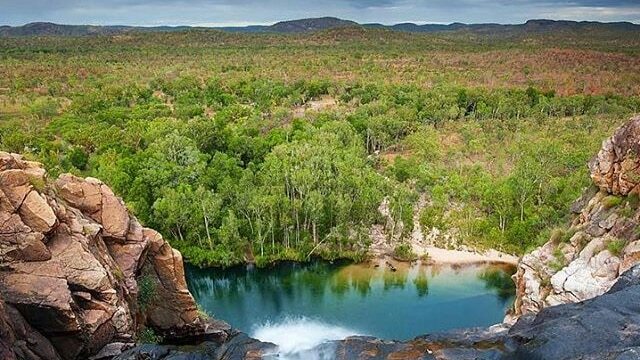 A court battle over alleged damage to a sacred site in Kakadu National Park will likely head to the Northern Territory Supreme Court, with Parks Australia on Friday pleading not guilty to the charge laid against it.

The plea was entered the same day Gunlom Traditional Owners buried a senior custodian who helped lead the fight for accountability over allegedly illegal works at the iconic Kakadu site.

Parks Australia — which jointly manages the national park with Traditional Owners — is accused of breaching the conditions of the permission obtained to build a walking track near the park's iconic Gunlom Falls infinity pool.

The matter will return to court in April, with Northern Territory Chief Judge Elizabeth Morris telling the court she expects to refer it to the Territory's Supreme Court.

If found guilty, Parks Australia could face a maximum penalty of $314,000.

The federal government argues that Parks Australia, as a Commonwealth body, is immune from prosecution under laws of the Northern Territory.

Commonwealth lawyers have said that, ultimately, the question could be determined by the High Court.

AAPA welcomed the matter's progress towards the Territory's highest court.

However, chairman Bobby Nunggumarjbarr said the battle would go on without a key voice in the fight, with a burial ceremony taking place on Friday for senior Gunlom custodian and Jaowyn traditional owner Mr Markam.

In a statement, a spokesperson for Parks Australia said the decision to contest the charges did not "diminish the director's public commitment" to work with Traditional Owners to remediate the site.

"The plea of not guilty is in accordance with a direction that the Commonwealth Attorney-General has issued [to] the director of National Parks in relation to the matter, and to ensure the constitutional issues can be properly addressed," the spokesman said.

Parks Australia has also denied the suggestion of delays in remediation works at the site.

"An Authority Certificate has been obtained from the Aboriginal Areas Protection Authority for Parks Australia to realign the Gunlom walking track and to undertake remediation of the area," the spokesperson said.

"Pending approval of the designs, Traditional Owners agreed work could commence at the site this dry season (2021) and, all going well, the track realignment will be completed next dry season (2022)."