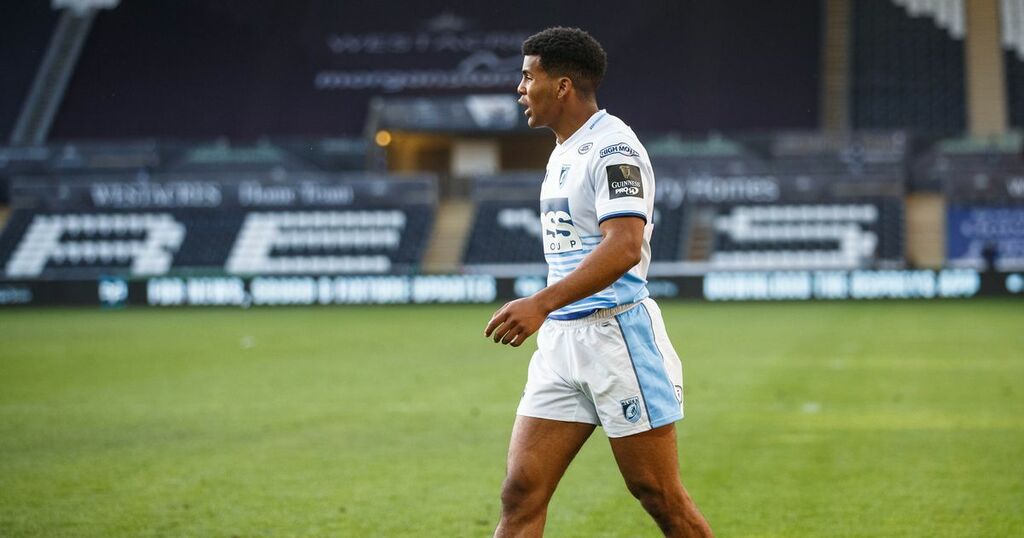 There are fears a teenager tipped as a future Wales international could be lost to England after having to head across the bridge for his education.

Immanuel Feyi-Waboso had been hoping to study medicine at Cardiff University and continue his progress at the Arms Park, having made his senior regional debut for Cardiff Blues in April.

But he failed to secure a place, despite achieving the three A* grades he required at Clifton College in Bristol, having been on the reserve list.

The Wales U18s outside centre has now taken up a spot at Aston University in Birmingham instead.

Cardiff Rugby are making efforts to try and keep him on board, but are concerned he could be snapped up by an English club or even drift out of the game altogether.

The former Corpus Christi pupil started out with Rumney RFC, progressing through Cardiff Schools and the Cardiff Blues age-grade sides.

He signed a senior regional contract last year, making his debut, aged just 17, as a replacement winger against the Ospreys in the Rainbow Cup in April, while also figuring in the pre-season game versus Harlequins last month, before heading off to university.

Cardiff's Academy manager Gruff Rees has no doubts over the potential of the 18-year-old three-quarter.

“I think he could be a future Welsh international,” he said.

“There’s something pretty special there.

“It’s just his potential physical abilities. He is big and quick and there’s not many of them around.

“I saw him first with Cardiff School U15s and then our Cardiff Blues South U16s.

“There was such raw potential there, with a great fend, and he’s developed a good skill set over the last couple of years, understanding the game more.

“He’s benefited from a good programme at Clifton, alongside our Academy work.

“He has been around our senior group a lot which shows how heavily invested we have been in his development.

“He made his senior debut against the Ospreys back in April, which was a hell of a leap of faith by Dai (Young).

“He can make an outside break and hit a good line, but also in defence he has got a huge wing-span and shuts things down.

“He’s just an imposing player around the contact area.

“Obviously, at age group, he could dominate there, but even transferring to the senior game there were signs he was going to take to that quite comfortably.”

Former Ospreys backs coach Rees continued: “He would have played for Wales U20s in the summer, but we put his educational commitments to the fore to try and get his grades, to put a plan in place for the next few years.

“He did a full pre-season with us and figured against Harlequins last month.

“We were hoping to get that continuity on results day that he could get across to Cardiff Medical School.

“He got the grades, but unfortunately he didn’t secure a place through admissions.

“He was on the reserve list and he got his three A*s, but because of the climate and the demand for the Medical School he still missed out.

“I felt the university programme and us working closely would have been a brilliant fit.

“It’s always been clear that his academic career comes first for him and his family and I have always respected that.

“I felt, with the model of Jamie Roberts and Hallam Amos, we could do both.

“But it hasn’t transpired that way with him not getting in.

“It’s forced Immanuel’s hand and he’s had to take a place up in Aston University.

“The worry I have now is he could be lost to England or, even worse, he could drift away from the game.”

Rees is faced with the challenge of trying to keep Feyi-Waboso tied up with the Arms Park outfit.

“Obviously, we couldn’t honour the senior contract he was going to be on if he was not working with us full-time,” he said.

“But I have been trying to do a one-year Academy contract and get him loaned to a club like Coventry.

“We haven’t given up on retaining him on our books.

“There could even be the possibility of transferring to Cardiff University after one year.

“But clearly there’s a concern he could be picked up by the likes of Leicester or Wasps.

“Then again, he may not play any rugby at all this year. That’s the crazy thing because he’s an outstanding player.

“It’s a major concern that he could be lost to Welsh rugby or that a huge talent may just drift away from the game.”

Feyi-Waboso had spoken about his joint rugby and academic ambitions shortly after making his Cardiff debut back in April.

“Gruff Rees has been so helpful, unrealistically helpful,” he said at the time.

“I told him rugby is my passion, but also I do want to focus on my studies.

“Medicine is really important for me and he totally understood. He has just been an immense help.”

He added a comment that has now been somewhat overtaken by events.

“I like to think that I have shown it can be done,” he said.

“It’s nice to know more people can be kept in Cardiff, rather than just be losing loads of players to England.”

Reflecting on his sporting journey, he said: “I remember in U11s thinking I want to be a pro rugby player.

“You always get the doubters who say you can’t do that.

“But the pathway was so perfectly made and I managed to follow it exactly how you are supposed to and ended up in the senior team.

“It creates a goal for you to aim for and you never lose sight of that.”

On his debut against the Ospreys, he said: “When I got the call to go on, it was overwhelming, a lot of nerves, but mainly excitement. It was an adrenaline rush pretty much.

“Coming into the senior programme was a huge step up. It was daunting at first, but people have been so helpful.

“The reason why I love rugby so much is it’s a constant challenge. You are constantly learning, whether that’s from coaches or your peers playing with you.”

For the latest breaking news, interviews and headlines in Wales, you can sign up to our newsletters to get the biggest stories delivered straight to your inbox.