Comments by Joe Biden suggesting major US policy changes in regard to defending Taiwan before Washington quickly rowed back have sparked concern that the confusion could escalate tensions.

On Monday, in answer to a reporter’s question at a meeting of the informal Quad alliance, the US president said the US would “get involved militarily” to defend Taiwan if it came under attack from China. The answer was interpreted by some as an indication of a major policy shift. However, within minutes the state department began walking back the comments, and Biden himself clarified on Tuesday that there was no change to US policy.

In Taiwan, the comments were warmly received but confusion was evident, with varied interpretations over whether they signalled a change in policy, were a tricky bit of diplomatic speak, or a gaffe.

Beijing considers Taiwan to be a province of China, and while its leader, Xi Jinping, has said he hopes to “unify” the island peacefully, he has not ruled out taking it by force. Taiwan’s current leader says it is already a sovereign nation and it has no desire for conflict.

The US formally recognises Beijing, but has strong informal relations with Taiwan and legislated obligations to provide it with the means to defend itself. However, the US has also for decades operated a policy of “strategic ambiguity” where it refuses to detail if it would come to Taiwan’s aid, in order to deter both sides from provocative action. It was this policy that some believed Biden was moving away from.

This week was not the first time that off-the-cuff remarks from a US president have prompted speculation about major changes to Taiwan-related policies, and Biden has now done so at least three times.

In Taiwan, the foreign ministry thanked Biden for “reaffirming their rock-hard commitment to Taiwan” and publicly affirmed the White House stance that policies were unchanged. Perhaps signalling the concern with which the comments were seen, Taiwan’s usually deeply divided legislators spoke cautiously on the topic, although some from both sides of the aisle believed the comments did signal Biden was moving towards clarity.

Bonnie Glaser, director of the Asia Program at the German Marshall Fund, said Taiwan’s government “focuses on the president’s declaration that he will defend Taiwan, which they welcome because it provides reassurance to their public and boosts support for the ruling party. They ignore the rest”.

Local headlines praised the president’s remarks, with many taking the angle as either a commitment to use force in defence of Taiwan, or that the president was signalling a move towards clearer commitments.

“It is impossible that he said the wrong thing again,” said Akio Yaita, a Japanese journalist and frequent commentator in Taiwanese media. Yaitia described the White House’s clarifications as a tactic to “save some face for China”, and concluded the US had adjusted its policy on assisting Taiwan.

Wen-ti Sung, an expert on Taiwan issues at the Australian National University, told the Taiwanese outlet UDN that Biden was trying to “have both fish and bear paws”, with a public “slip of the tongue” and clarifications that “still give the impression that the United States has strengthened its determination to have a clear strategic goal without incurring the cost of [strategic] clarity”.

Apple Daily was among outlets to characterise his comments as a gaffe, describing the White House as repeatedly having to “put out fires” after Biden mentions Taiwan. Chao Shao-kang, a Taiwanese media personality and Kuomintang member, suggested that Taiwan should ask the US state department to write down Biden’s promise on a piece of paper so he couldn’t change his mind.

On the streets, reactions among the public were equally varied.

“As a Taiwanese male who is trained for the armed forces, I’m not worried that such a statement will affect the situation in the Taiwan Strait,” he said. “What is really likely to cause war is an affirmative and extreme declaration or guarantee, not by exploring the Chinese government’s response through media Q&A.”

Ms Chu, a Taiwanese student at Yale University, said Taiwan was treated as a “bargaining chip” between the US and China. “I’m not sure if his swaying statement is a tactic in itself or just because he loves to give unscripted speeches. And I tend to be more worried because China is very easy to get irritated.”

Mrs Lai, a 34-year-old housewife, believed it was diplomatic strategy. “Saying the so-called policy has not changed may be just sales talk. But I still don’t think that when Taiwan is attacked, we can definitely count on the help of the United States.”

Kwei-bo Huang, a professor of diplomacy at the National Chengchi University and a former deputy secretary general of the modern KMT, said he feared the confusion could escalate hostilities with China, including among Chinese people.

“Patriotism and nationalism in China is aroused every time Biden [either] misspeaks or says something on purpose that irritates the Chinese authorities,” he said.

Huang hoped the post-remarks clarification would at least discourage Chinese officials from issuing more inflammatory statements, but on Tuesday, the foreign ministry spokesperson Wang Wenbin again spoke at length against the US and Taiwan.

“No forces, the US included, can hold back the Chinese people’s endeavour to reunify the nation,” said Wang. “I’d like to advise the US to listen to a well-known Chinese song with these lyrics: ‘For our friends, we have fine wine. For jackals or wolves, we welcome with shotguns.’”

On Tuesday Russian and Chinese military also held joint exercises near Japanese and South Korea air defence zones, interpreted by some as a provocation on the last day of Biden’s Asia trip.

Echoing Glaser’s calls for greater clarity and less confusion, Huang said the US often saw cross-strait tensions through a US-centric prism, and that Taipei needed to make it clear to the US that Taiwan was in a difficult position.

“We like to maintain a robust relationship with the US and keep peace with Beijing, but we don’t want to get involved in any major conflict. This needs to be made clear to US officials,” he said. “You have to put yourself in Taiwan’s shoes, we’re right in front of mainland China, we have to deal with it.” 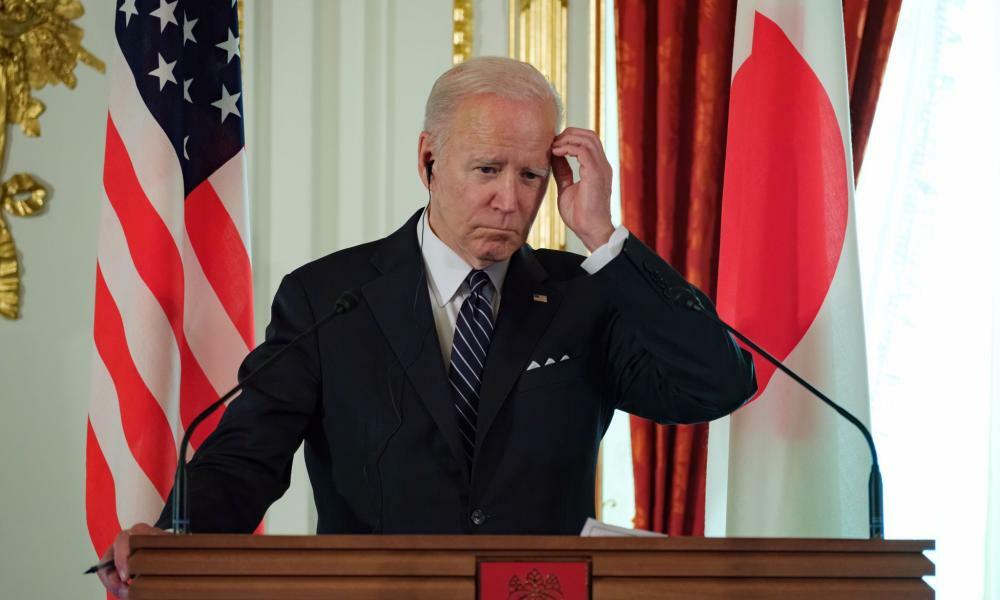 The Guardian - US
One subscription that gives you access to news from hundreds of sites
Biden is sending dangerous messages about Taiwan to China. The US should tread with care

The Guardian - US
A Classic Biden Gaffe Complicates U.S. Role in Taiwan

Will Xi Jinping just chalk up Biden's latest remarks as an accidental straying from "strategic ambiguity"?